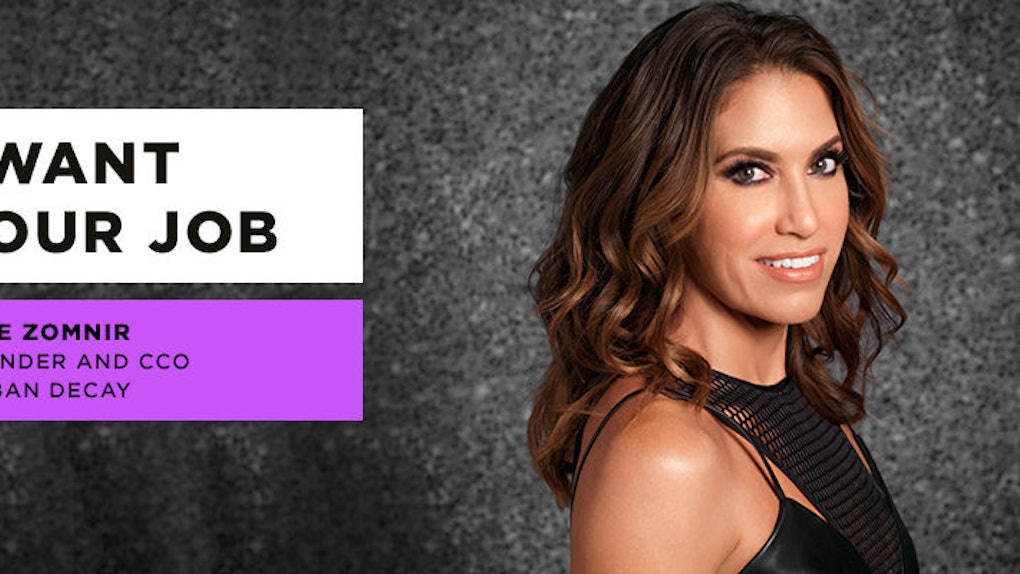 I Want Your Job: Wende Zomnir, Cofounder And CCO Of Urban Decay

Imagine walking into a Sephora in search of blue eyeliner.

You're prepared to mentally debate between navy and indigo shades but, to your surprise, there's no blue at all.

Instead of hues across the rainbow, the only products sitting on the shelves are tan, brown, red and pink.

If it sounds like the makeup lover's nightmare, akin to something you might see in an old "Twilight Zone" episode, that's because it is.

This is what the cosmetics world was like, not so long ago. It might still be the status quo, if a little company called Urban Decay hadn't changed the makeup game.

It's hard to gauge the influence of a company that started with 10 nail polish shades and 12 lipsticks.

Certainly, the brand's Naked palette series took a professional idea -- the effortless smokey eye -- and empowered women to try it themselves.

The most empowered of them all, however, is Urban Decay cofounder and chief creative officer Wende Zomnir.

Raised in both Texas and Belgium, Zomnir always remembers herself as the girl sent home from school for wearing too much makeup.

When we speak, she's calm and confident. It seems as if nothing can rattle her. It's a little disarming to talk with someone who so evidently loves her job and the products her line makes.

She attributes the beginnings of her business savvy to a stint in the Texas pageant world at age 19.

To be sure, Zomnir learned to tease her hair like a Southern pro. But, she was also responsible for collecting donations from more than a dozen local businesses.

It was all about marketing yourself, selling your ideas and being willing to just knock on the door and just put yourself out there. I think that was the biggest lesson I learned, is that people would listen to me and I could sell myself.

Although she never again competed, Zomnir remembers knocking on those doors as the challenge that conveyed how capable she was.

It's like cold calling. That's the hardest thing ever from a sales standpoint. If you can get through that, then standing up in front of a room of people that want to hear your idea — whether it's an ad pitch or pitching Urban Decay to Nordstrom.

As a young woman, a confident Zomnir put those skills to use. First, at the Chicago ad agency Leo Burnett, and later at her own line.

Although the Midwest didn't suit her, Zomnir navigated the six-degrees-of-separation friendships that would eventually lead her to cofounder Sandy Lerner in California.

Lerner, fresh from the sale of Cisco Systems, was looking to create an indie makeup line. She and Zomnir clicked instantly, working out of a tiny apartment to get the grungy line off the ground in 1996.

You know how people sound when wistfully reminiscing about first loves? That's the tone in Zomnir's voice as she remembers those days.

It's bananas. I think about how we started in my apartment. I had these neighbors who were like these unemployed surfer girls. I would have them come over to paint fake nails to glue on the displays. That was really how it got made.

Today, Zomnir believes it's a different world out there for makeup lovers.

Weird is good. People like it now... People are so much more free to express themselves generally today in 2015 than they were when I was in high school. It's a lot less about conformity.

Zomnir asserts that she continues to personally test every product Urban Decay produces. Playing with makeup all day at your desk is also known as "the dream."

The Internet, in particular, has become Zomnir's largest sounding board. YouTubers digitally review products while teaching their followers complicated, and previously unknowable, techniques.

To this day, Zomnir believes in playing character roles with her makeup. One day she's a contoured goddess, the next she's a punk rock princess who gives Joan Jett a run for her money.

It's the dream. That's what you want to do. It's makeup, it's having fun. It's self-expression. I feel like generally it's a really positive community.

These days, makeup lovers aren't Zomnir's only cheerleaders. She's a mom, as well, and mixes work with family as often as she can.

I think it's really good for my boys to see that I have responsibility and a job... There's lots of powerful, smart, strong, beautiful women that show up at my office every day. And I think for [my kids] to think that's normal is exactly what I want.

Zomnir's approach to business and motherhood might be just as much about expression as it is about equality. Kids who grow up understanding the importance of showing the world their true selves will be comfortable and well-adjusted.

Laughing, Zomnir shares a memory that sums up her entire career neatly. She remembers a priest who told her younger self, mid-confession of sins, that she had to stop wearing so much makeup.

Zomnir remembers exactly what she would've liked to tell him.

I'm not hiding... I'm telling you something about who I am. You should pay attention to that.