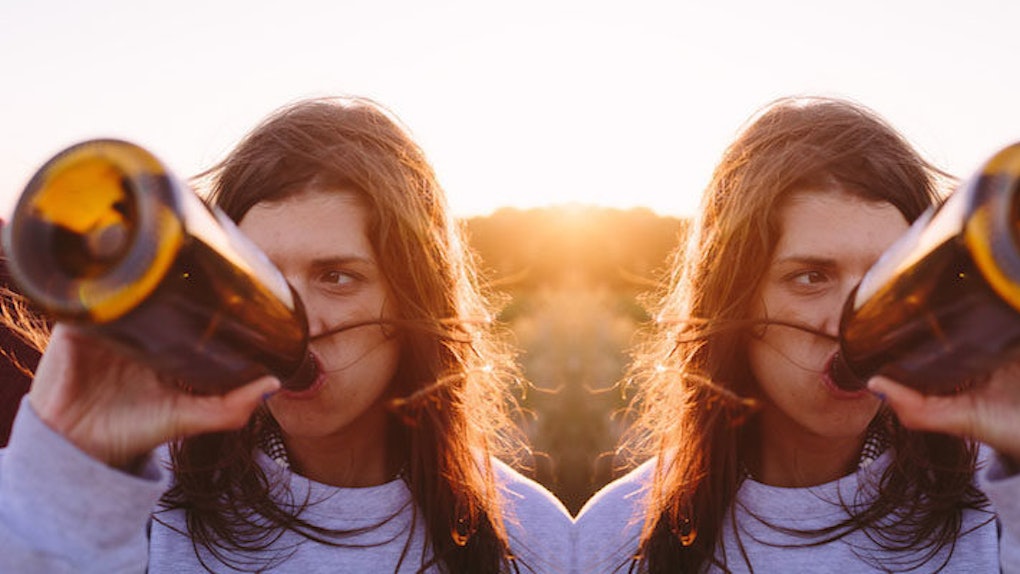 Every time you go out at night, a different version of you comes out to play. We've all been the most fun person at the bar and the person no one wants to deal with.

These things tend to happen, but hopefully all your other friends were as blacked out as you were and they don't remember it either.

Well, even if this is the case, the pictures that were most definitely taken that night do not lie.

So as much as you want to bury whatever it was that happened to you that night deep down in your psyche, this evidence will live to tell the tale.

So what do these multiple personalities actually look like and how many have you been?

You don't really know WTF is going through this girl's mind, and that's probably because she's all over the place.

She's the drunk girl who can't find her phone at the end of the pre-game, who can't figure out what bar to go to and really only wants to get f*cked up.

Chances are she wakes up in bed with her outfit on from last night with the lights on.

She only went out with one intention: to meet up with the guy she's been chatting with. She's not going to start the night off with him because she thinks she must play it cool -- that is until the liquor starts flowing.

At this point, she doesn't care how crazy she seems... because alcohol. Insert seven-scroll text here. This girl will probably wake up by herself unless this guy is as inebriated as she is.

3. The girl who can't stop crying

This is probably one of the worst people you could encounter on a night out. Everyone knows once the tears start flowing, they don't stop, and the entire night is ruined.

It doesn't even have to be a legitimate reason because this girl is drunk and her emotions are at an all-time high. Your best bet is to steer clear so you don't end up being the babysitter. Which brings us to...

This is the designated role of the least drunk person on any given night. She always gets stuck taking care of the girl who is just way too f*cked up. How her night goes depends on the actions of the drunk friend.

Hopefully, the babysitter can convince her to go home, but chances are, she will be stuck following her around the bar, preventing her from taking more tequila shots and tricking her into drinking water that is disguised as a vodka soda.

The night can have the potential to be the best night ever, but this girl can't be bothered with that. Instead she's focusing on everything that's wrong with the night.

"I don't like this alcohol. There's no chaser left. Why is there a cover at the bar?"

This girl skips dinner so she can indulge in late-night pizza. Everyone has been this girl once in her life and if she claims otherwise than she's a liar.

The best part of any night out is when you finally get to go back home and order endless options on Seamless.

7. The girl with a one-track mind

She isn't going out to hang out with her friends, she's going out to meet a guy. She doesn't care if it's someone she is meeting that night or someone she's known for a while.

All she knows is that she isn't going home alone tonight.

This girl needs the babysitter, but, unfortunately, no one feels like dealing with her sloppy self. She is the girl who took five too many tequila shots and is still continuing to order drinks at the bar.

Hopefully, the bouncer will figure this out and escort her into a taxi because she definitely needs to go home immediately.

If you can't find this girl, don't fret because she's definitely by herself in the bathroom powdering her nose. No further explanation necessary.

This girl cannot be by herself at the bar for more than 30 seconds without having a panic attack. She needs to be with her friends AT ALL times.

She can't get a drink by herself and she definitely can't head into the bathroom by herself. Maybe she should take a note from the druggie in this case...

11. The girl who thinks she's in a music video

If there's an elevated surface in sight, you can bet your last dollar that this chick is parading around on top of it.

Maybe she thinks she's in "Coyote Ugly" or maybe she's just wasted — either way you know where to find her.

12. The girl who always has an emotional breakdown

This girl is different from the crier. The crier is the person who will start bawling the second something goes wrong in the night, whereas the girl who always has an emotional breakdown is most likely crying about her ex-boyfriend or ex-best friend.

There is no shutting this person up because, in her mind, she is completely justified in her actions. Until she sobers up, she won't realize how unreasonable she was actually being.

This person calls all of the shots every single time you go out with her. She can never just go with the flow, instead she must have every single move of the entire night planned out ahead of her. Sad? Yes. But does it sometimes make your carefree lifestyle easier? Definitely.