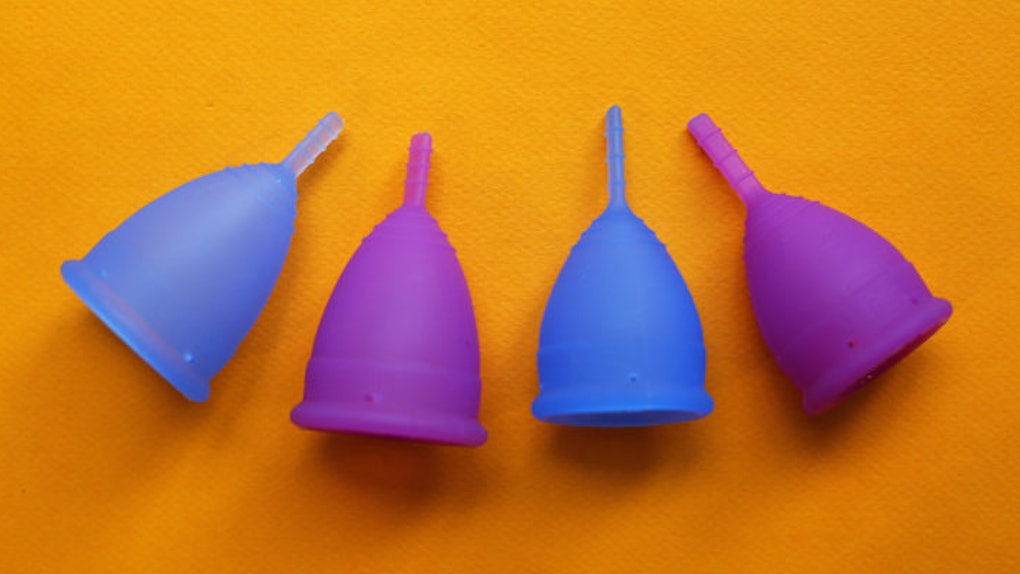 7 Questions About Menstrual Cups You're Too Grossed Out To Ask

Let me say it again, this time louder. Menstrual cup.

Are you gagging yet? If so, you're approaching the whole issue the wrong way.

A little under two years ago, I purchased my first menstrual cup after months of hesitation. Bleached tampons drag and scratch, not to mention filling up trash heaps, and pads are too filthy even to mention.

Instead of hurting me, this silicon space-age cup was the answer to my prayers.

I regularly spread the lady-cup gospel to the women in my life. More often than not, though, it seems as if they don't hear the advantages because they're too busy dry heaving.

Menstrual cups are really not gross. I promise. Even the most squeamish among you can definitely figure this out.

When folded in half, the soft, flexible cup slides right up where a tampon would normally go. Sitting low, the cup's suction holds it in place while it quietly fills with menstrual blood over the course of the next 11 hours.

That's not six, not eight, but 11 full hours without having to think about your period.

Additionally, when it's time to change, the process is so simple even a horror movie heroine could do it. You simply break the suction with a finger, pull the cup out by its tab and empty the contents into the toilet.

Not convinced yet? Just wait. I got in touch with Cathy Chapman, marketing and social media manager for Lunette menstrual cups.

In her no-frills way, Chapman shared candid responses to the questions both my friends and coworkers were too grossed out to ask.

How do I determine which size of cup I need? I've never measured the inside of my vagina before and the idea kind of freaks me out.

Relax, there's no measuring involved. You don't have to call ex-hookups to ask, either.

Lunette's two cups are sized based on flow, not actual vaginal width. Both hold a reasonable amount of blood, one is just slightly larger.

Easy. Even the most squeamish woman knows how heavy their Aunt Flo is.

What will happen if I pick a size that's too small? Will it explode and drench everyone with my blood, “Carrie”-style?

Short answer: no. At worst, you'd find yourself leaking a bit.

That's nothing your traumatized middle school self couldn't handle, especially since you don't even have to go to gym class anymore.

"You would find yourself emptying it more often,” Chapman says. "Generally, though, even with the size one menstrual cup it's still holding more than what two regular tampons absorb."

It's important to note, however, that Chapman recommends pairing your cup with a pantyliner the first period you use it. She laughingly explains there is a bit of a “learning curve."

Not a phrase you hear every day.

Will I lose it in my vagina and never be able to have kids?

"Literally, you won't ever lose your cup," Chapman asserts. "It's not going to venture through your womb or out your colon. No, not gonna happen."

Thank goodness, because none of us can stomach telling the doctor how a menstrual cup ended up in our asses.

Is putting in a menstrual cup similar to birthing a child, pain-wise? What can I expect?

After you've opened the package, you'll want to wash the cup with unscented soap. Then, fold the cup — it may take a few tries to find the best fit — and ease it into the vaginal canal the same way you might with a tampon applicator.

Most importantly, this entire process should be devoid of annoying pains. You shouldn't feel the cup until it's ready to come out.

"It shouldn't hurt,” Chapman laughs. "If it hurts, you're definitely doing it wrong.”

Indeed, the cup shouldn't be sitting anywhere close to your cervix.

"I think one of the biggest misconceptions [with] the menstrual cup [is] you have to shove it up there to your brain. But, actually, you wear the cup lower in the vagina above the pubic bone,” Chapman explains.

Give the handle a light tug to test the seal, and it should stay in place.

I'm super extra weird about blood and don't want to faint on the toilet trying to change this thing. How much gore should I prepare myself for?

If you can handle a tampon, a cup should be OK.

"Definitely don't just fling your cup out, pull it and whack it around," Chapman says. "If you break the seal and then gently pull down, it'll stay in place. Just picture it as a wine glass, and you don't want to spill the wine.”

Or, you know, maybe drink wine while you try and pull the cup out the first time. It might help.

Will I smell like period? I don't want dogs trying to sniff me.

You can be sure of one thing: you won't smell the blood. According to Chapman, it only starts to have an odor when exposed to air. Nestled safely inside of you, the cup is smell-free.

If you do catch a whiff of something, it might be your vagina's natural eau de parfum.

"Generally when people experience smell, that's usually a result of their own vaginal odor and sweat," Chapman explains. "That's like a normal scent."

Oh, well, this is awkward.

Can I have sex, or will it scare my date away forever? I only get one shot at this and I can't blow it.

You can have some sex using a menstrual cup, just not the penetrative kind.

"You can definitely enjoy oral sex with a menstrual cup, so that's a plus," Chapman says.

Short of actual pentration, she stresses the ease of life without a dirty old tampon string to drag around. Activities like wearing a bikini to the beach and booty shorts at the gym suddenly get so much easier.

An easy period, no strings attached. Throw those tampons away and never look back.