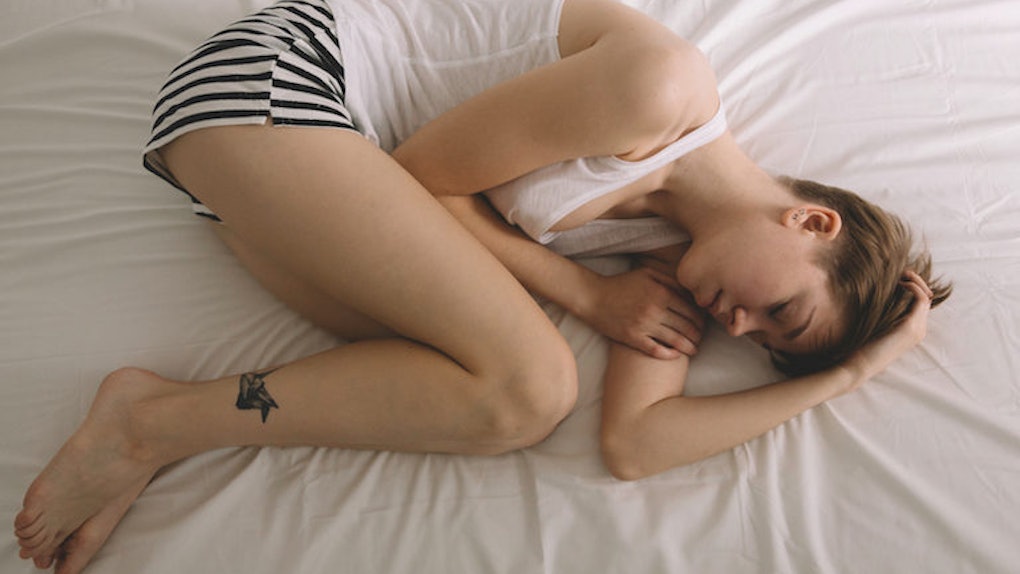 If you thought everyone experiences premenstrual syndrome (PMS) the same way, think again.

Researchers from the National Institutes of Health (NIH) have discovered there are molecular mechanisms that may alter a woman's ability to turn off traditional PMS symptoms like irritability, sadness and anxiety leading into her menstrual cycle.

So basically, for women with PMDD, it's actually impossible for them to NOT feel like a garbage human... it's not just in their heads. Their PMS really IS that bad.

This beautiful phenomena of life is called premenstrual dysphoric disorder (PMDD), and it affects 2 to 5 percent of women who are of reproductive age.

Of course, traditional PMS is much more common and often used as a blanket term for any moodiness or emotion leading into a period.

In the '90s, the NIMH team noticed that even though women's hormone levels might be normal, those who usually experienced fluctuations in their moods during their cycle seemed abnormally sensitive to common changes in sex hormones.

By experimentally turning off estrogen and progesterone, researchers noticed this eliminated PMDD symptoms. This confirmed something biological on a molecular level was messing with woman's feelings and attitudes — not just the general grumpiness that comes with bleeding from our genitals.

Peter Schmidt, MS, of the NIH's National Institute of Mental Health, Behavioral Endocrinology Branch, explains in Molecular Psychiatry that PMDD is a disorder "of cellular response to estrogen and progesterone."

He has hope that this discovery will help make way for accessible treatment and solutions to moodiness that comes with PMDD and the miracle of being a female.

Along with Schmidt, David Goldman, MD, of NIH's National Institute on Alcohol Abuse and Alcoholism reports,

This is a big moment for women's health, because it establishes that women with PMDD have an intrinsic difference in their molecular apparatus for response to sex hormones — not just emotional behaviors they should be able to voluntarily control.

Additionally, researchers took into consideration that 56 percent of PMS is heritable, and studied how genes interact with white blood cells differently for women specifically with PMDD.

What they discovered is that a gene called ESC/E(Z) (or Extra Sex Combs/Enhancer of Zeste) is in charge of transcribing genes into proteins. This occurs as a response caused by sex hormones, stressors or other changes in environment.

Schmidt explains, "For the first time, we now have cellular evidence of abnormal signaling in cells derived from women with PMDD, and a plausible biological cause for their abnormal behavioral sensitivity to estrogen and progesterone."

Moral of the heavily scientific story? It's not your fault you feel terrible. It's science's fault. SCIENCE, GO HOME.