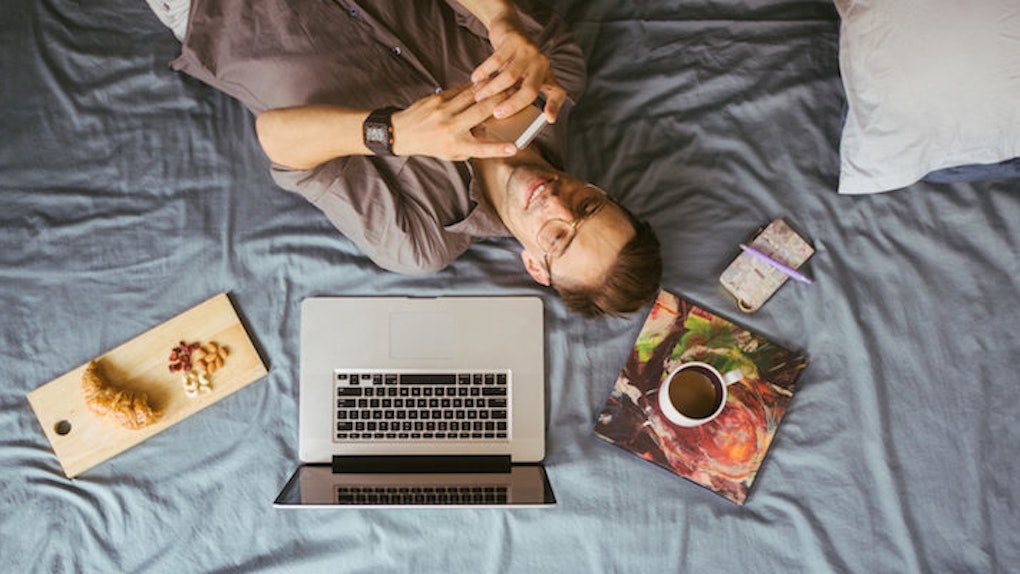 Relax & STFU: The New Meaning Of 'Netflix And Chill' Is F*cking Dumb

The Internet is where every good idea goes to die.

For example, Netflix and chill has quickly evolved from a cute term 20-somethings used when they wanted to relax after a long week to a new, (un)clever booty call pick-up line.

And women, naturally, are avoiding it like the plague.

What was once an excuse for a no-fuss date now reeks of predatory sexual connotations, thanks in part to Black Twitter and endless Netflix and chill articles scattering timelines.

Many have crafted memes in honor of this ridiculously novel idea. Netflix's PR team has even developed a DIY called The Switch, which enables you to order food to make your viewing experience more enjoyable.

I can't even make this sh*t up.

But newsflash, folks: Netflix and chill is just dinner and a movie! You're not cute because you've put a Millennial spin on it.

Before we Netflix and chilled on the regular, rummaging the aisles at Blockbuster and grabbing Pizza Hut was the ideal precursor to a great Friday evening. Not to mention, a thrifty alternative to catching a 7 pm flick at Regal Cinemas after stuffing your face with Olive Garden's breadsticks.

So, sorry, you entitled Millennials, you didn't reinvent the wheel. Instead, the simplicity of great, inexpensive date nights have become subversive.

But hey, I guess we should be used to Internet junkies spinning age-old ideas into stupidity, right?

For instance, once Twitter got a hold of the formerly uncool act of being "basic," women wearing Uggs and sipping Pumpkin Spice Lattes littered every college campus across the nation.

Then, social critics twisted the real definition of a f*ckboy into an emotionally stunted womanizer.

And must I even mention how Taylor Swift became a purveyor of friendship circles (#squadgoals!) and shoves it down our throats ad nauseam?

Since we have a knack for ruining the true essence of sh*t, I wonder, are Nickelodeon 90s cartoons the only cherished things left from our nostalgic past that we haven't destroyed?

To be clear, Netflix and chill is no longer an appropriate first date or an acceptable social engagement at all, for that matter.

Reruns of "The Fresh Prince and Bel-Air" don't come with a side of nookie just because some douchebag implies sex is the subtext of his 11 pm iMessages. If you find yourself facing off with a guy who demands the cookie for simply selecting a flick on his Apple TV, don't blame Netflix or some newfound Internet jargon for his ill intentions.

But maybe this new dating norm is a telling sign we should delete our Tinders and head back to simpler times. Perhaps back to the 90s when women painted their lips brick-brown and didn't anticipate an onslaught of sus text messages from every new match.

Or, maybe we should just accept that the world is devolving into a universe where Gigi Hadid is body-shamed and old episodes of "Grey's Anatomy" and cuddling in sweatpants are considered romance.