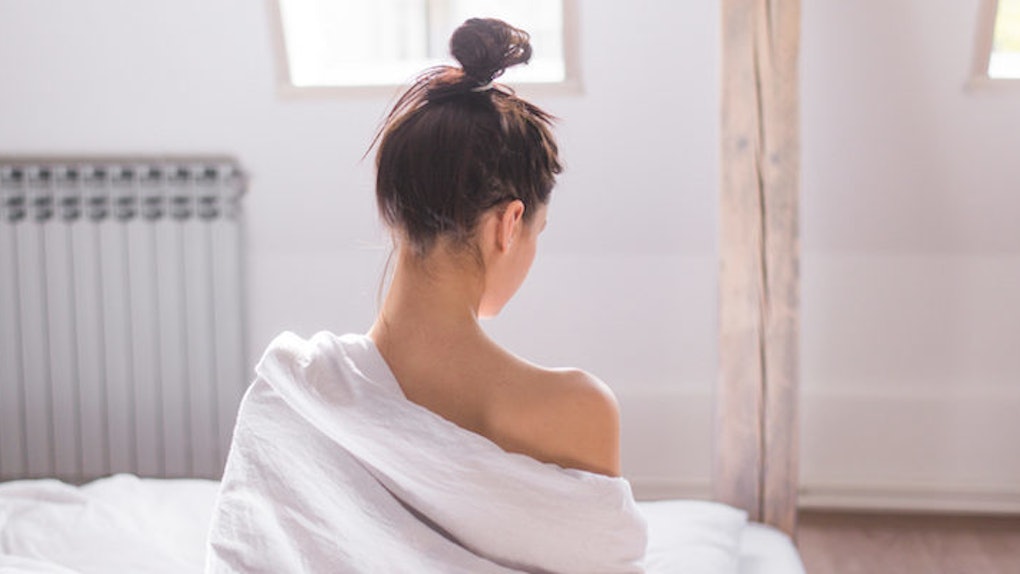 Last week, I cried over my body in front of my boyfriend. We had just been lying on my bed and were transferring to the couch to watch a movie when I noticed the way the sides of my underwear were pressing into my love handles, clenching my fat and leaving red marks on my skin.

I couldn't believe I had love handles. Love handles. I've NEVER had love handles. It felt like just yesterday that I was a size four 17-year-old with a metabolism that let me eat carbs without regard and who wore a tight, white dress to senior prom without any stomach bulges showing.

Throughout high school, I was known for being "thin" and "pretty." (You know, because that's what's really important.) Remember Formspring, that awful platform that allowed people to anonymously tell you how they felt about you? I got flooded with reminders of how thin and pretty I was all the time.

Whenever I struggled with schoolwork or getting a guy to like me, friends and family were quick to remind me that I'd ultimately be fine because, again, I was "thin and pretty." I had a sh*tty time at senior prom (yes, that same senior prom from the photo above) because my high school boyfriend was being an assh*le, but the next day my English teacher told me I "looked like a model," so I used that as a way to lie to myself that I actually had a great time.

And so, the message became clear: Nothing else matters because you're thin and pretty. So "thin" and "pretty" became how I defined myself.

But, as evidenced by what I'm going through right now, it's a problem when a woman's worth is defined by something as surface-level as weight and beauty.

As a size four, I felt like I was pretty close to that "ideal" body the media raves about. I felt happy, confident, whole. But now, thanks to discovering a love of beer in college, moving to New York City with access to thousands of delicious restaurants and no longer having the metabolism of a teenager, I've gained about 30 pounds. My old clothes don't fit me anymore. Styles that used to look good on me no longer do. And I feel awful about it.

Our society does this a lot: It tells women to believe that "You're beautiful just the way you are!" and then, by that same token, creates beauty standards so unachievable that it becomes impossible to ever actually feel "beautiful." It was easy for me to feel beautiful at a size four. But what about now? How can I feel beautiful now?

Maybe, to solve this problem, we should start telling girls they're literally anything besides beautiful. What about smart? Funny? Clever? What about those descriptors? Do those not count? I know for a fact that I'm those things, too. But "thin" and "pretty" have always taken precedent.

I WISH people hadn't spent my formative years telling me how thin and pretty I am. I WISH I had been known more as the "smart girl" or the "funny girl" or the "clever girl." I wish someone, anyone, had told me there's more to life than thinness and prettiness. Maybe then so much of how I value myself wouldn't be tied to my freaking appearance.

And I realize that a size eight is not anywhere near fat (even though we all know Glamour thinks otherwise). But it's been difficult for me to accept myself at my new weight. A co-worker recently told me that I'm "busty," and I was like, What the f*ck? Busty? Since WHEN? On really bad days, I have a hard time looking in the mirror -- or hanging with my boyfriend, apparently -- without crying.

So what's the solution? I already lead a balanced, healthy life. I drink lots of water. I eat whole grains, fruits, vegetables and protein just as frequently as all those Instagram fitness stars out there. I don't love working out, but I go kickboxing whenever I'm in the mood to break a real sweat, which lately has been two to three times per week. I also have a decently long walk to the subway from my apartment, which I take twice a day.

Should I increase my workouts and drive myself to insanity with a strict diet to try to be a size four again? Is it worth it? I'm not going to lie: Sometimes, I think it is.

Other times, however, I think about the fact that, at 22, I'm living my dream as a writer. I have my own apartment in New York City. I have the most fulfilling friendships I've ever had. I'm dating someone I see a real future with. At 22, there is so much more to my life than what I look like.

But that was also true when I was 17. I just wish someone told me that.