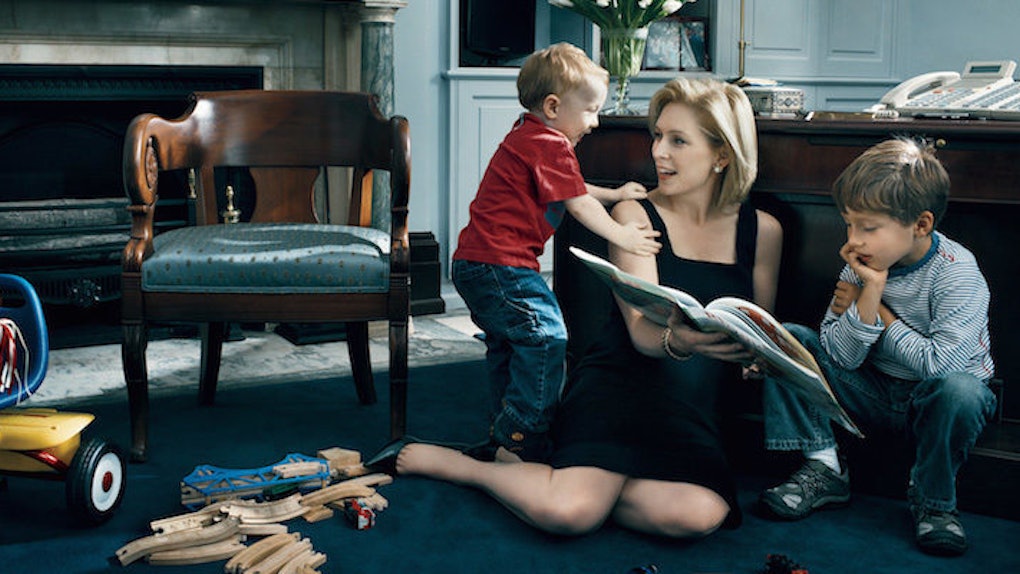 The Unthinkable: How Millennial Moms Are Having Both Families And Careers

For most Millennial women, it’s seemingly difficult to choose between having a successful career and having a family.

The oldest Millennials are now in their early 30s and starting to think about having kids, but a record number of women in their late 20s and early 30s are undecided about whether they want to become mothers.

One Match.com study from 2011 found that just 46 percent of women ages 21 to 34 said they wanted kids, compared to 51 percent of men that age.

Of course, men actually tend to get paid more once they become fathers, compared to working moms who lose 4 percent of their salary per child. Can you say unfair?

As I’m just beginning my working life, I know the idea of pausing my career to have a kid seems daunting.

I just wish I had Hermione’s time turner from "Harry Potter and the Prisoner of Azkaban," so my future self could spend a full day at home with my kid, turn back the clock, and then go into the office for a full nine hours.

Here’s the good news: There are a few ways Millennial moms can get all the joys of having kids without sacrificing their careers.

Most people view their 20s as a time to work hard to get ahead, which makes sense because we 20-somethings seem to have an endless supply of energy.

The bright side is women who work hardest in their 20s and earn more than 90 percent of other women, are less likely to see their salary drop after they have children (according to a report done by Michelle J. Budig and released by the Third Wave think tank).

If you’re making around $90,480 per year, you actually could continue to be paid at that level, or higher, even after you have babies.

Hard work pays off in the long run, so if you know kids are in your near future, that will serve as an incentive to work even harder.

2. Position yourself in a steady, high-paying field.

Planning for a kid and getting ahead in your career are similar in that both require significant strategizing.

Being a physician, marketing manager, CEO or engineer are some of the careers that will increase your chances of earning a strong salary and allow you to resume your progress after you have children.

Women also find high-paying jobs as pharmacists, lawyers and in management, according to current data from the US Bureau of Labor Statistics.

Of course, if you’re passionate about a certain field, you should pursue it whole-heartedly and try to gain as much seniority as possible before taking time off to have a kid.

3. Try to find a flexible career.

If you’re inclined to multitask being a stay-at-home mom and working part-time, more power to you. Many full-time and part-time jobs these days allow you to telecommute.

Jobs in the medical and health field, computer and IT, customer service, sales and the administrative field have the most flexible employment opportunities, according to FlexJobs.com.

You’ll still be able to pursue careers you’re interested in or already involved in while maintaining hours that will allow you to work around your kid’s busy schedule.

Timing is so key for having kids, and it’s understandable if you feel you want to achieve success in your career before you start to think about starting a family.

There’s definitely something to be said for delaying having children until your late 30s or 40s.

Women who wait to have children can usually earn considerably more than women who had their kids earlier, regardless of their type of occupation.

One of the pros of having children later is the median woman having kids in her late 30s or in her 40s gets paid $7,859 more per year, compared to the median woman whose kids are a few years older.

Differences in salary between women who wait to have kids and women who have kids earlier become more pronounced in the jobs where salaries are high, according to data from the American Community Survey.

Delaying having children until later could leave you with more money to support your growing family and the ability to have a comfortable lifestyle.

There are obvious cons; women are less fertile in their late 30s and 40s, and if you feel like you’re ready to be a mother at this moment, you would be delaying doing something you’re excited about and really want for yourself and your partner.

There’s no right solution, and it all comes down to your personal desires and the timeline you’ve set for yourself.

Ultimately strategizing and planning to combine work and family earlier rather than later will allow Millennial moms to maintain their career progress and still focus on raising kids.

Millennial moms can have it all if they want it.