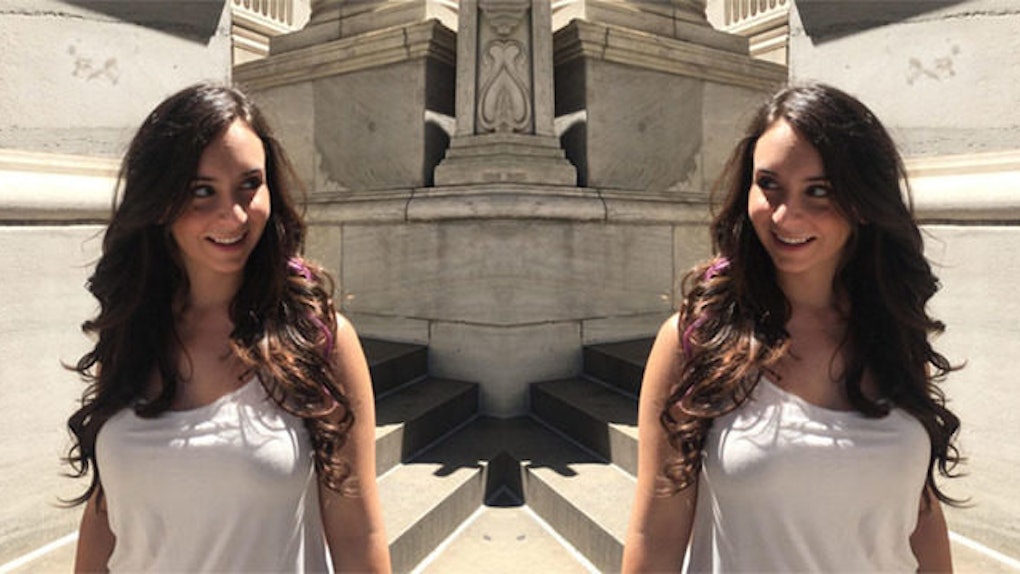 I Tried Mermaid-Length Hair Extensions And This Is What Happened

In August, I decided to become hairier.

Don't worry, this isn't a story about armpits. It's about one woman's quest to blatantly inflate her ego with the help of silky, clip-in locks.

After months of pouring $40 conditioning masks on my naturally thick hair, willing it to grow more, it dawned on me that years of TV teen dramas have left me with unrealistic expectations about my follicles.

Bouncy and shiny was one thing, but I wanted serious length. The kind that would hang over the edge of my bra like a modern Lady Godiva.

Ways to quickly grow my hair were all I Googled in my spare time. Suddenly it came to me: Mermaid hair would never grow naturally. I had to go out and purchase it.

I booked an appointment with RPZL and later found myself settled in a plush white chair with all the confidence of Sharon Stone in "Basic Instinct."

Two hours later -- after a color consultation, shampoo and blowout -- we decide on two tape-in extensions and a full head of lengthy clip-ons that fell precisely to the small of my back.

I looked like Reggie Bush-era Kim Kardashian, and it felt amazing. Now I understand why she looks so tiny -- she's dwarfed by the sheer size of her mane.

The first time I wore my mermaid hair, it was fresh out of the salon.

Men and women alike stopped for a second look as I walked to meet my boyfriend for dinner. It felt as if the hair swinging down over my shoulders was really a neon sign blazing, "I'M A SEXUAL BEING."

I spotted my boyfriend across the street, and he admitted he'd barely recognized me. That's when he reached up to touch my new locks and felt the metal and fiber scaffolding running across my scalp. With four tracks of hair in, I was a good-looking version of Arnold Schwarzenegger in "The Terminator."

My boyfriend couldn't take his eyes off me, but we've been dating long enough that it wasn't enough. The whole evening, I found myself missing his fingers in my hair and the weight of his arm around my shoulder.

The second he tried, my head snapped backward under the force of the hair.

The second time, I clipped in my locks for a party.

Getting up early to style my extensions for work seemed like it would be tough, so I decided to wait for the weekend to put them in again. Days later, the perfect event came: a party on my friend's roof.

I had a minor meltdown about not being able to find my curling iron (it turned out I'd thrown it away, oops!), so I decided to go rogue.

Teasing each layer of hair before clipping in an extension didn't take long, especially since I had no plans to style them past their pre-existing wave. Instead, I pinned back the top half of my hair and called it a day, never even anticipating how much the wind would tangle it.

In the dark — and under the influence of some beer and vodka "cocktail" that, funnily enough, I'd mistaken for iced tea — my friends thought I looked like a hippie goddess.

We took Polaroids, we talked about life and I briefly fell asleep on my friend's couch, as one does. What I'm trying to say is, I got used to the feeling of the hair's metal clips.

I looked glam, but taking out extensions while inebriated is a real battle of drunk brain versus drunk hands. After 10 minutes, I gave up entirely and let my boyfriend do it. And by "let," I mean I grunted directions while half asleep.

The third time I put them in, it was to an airport.

On my way to my nephew's christening at the end of summer, I decided now was the time to get ballsy about my fake hair. If Kim could travel in a weave, so could I. Plus, my sisters were eagerly anticipating their first sighting of the Cousin It-like hair I casually toted around in my bag.

My alarm went off at a time so early I'm fairly certain it's actually illegal, at which point I sleepily shuffled to the bathroom to stick in my tracks.

At this point, I realized the real downfall of sex symbol-length hair is if you're not wearing makeup, you will look incredibly similar to Samara in "The Ring."

So, I painted on few coats of foundation and mascara before hopping in my Uber.

When I got to the airport, it was immediately evident that hair extensions are the fetish of skeevy 50-something businessmen who often lurk in the Pret A Mangers of airports, harassing unsuspecting, noncaffeinated beauty writers.

A soon as I sat down to my breakfast wrap, a group of balding men asked to share my table. Nothing haunts my nightmares more than men who probably have children and wives calling me "pretty lady."

Suffice it to say, by the time I arrived in Toronto I was ready to take my hair out. That, and my mother openly laughed when she saw me.

These days, my mermaid extensions come out during times when there are no catcallers, boyfriends, work, wind, alcohol, sleepiness, businessmen, moms or planes involved. So, mostly in my room with Lady Gaga playing. But I'm okay with it.