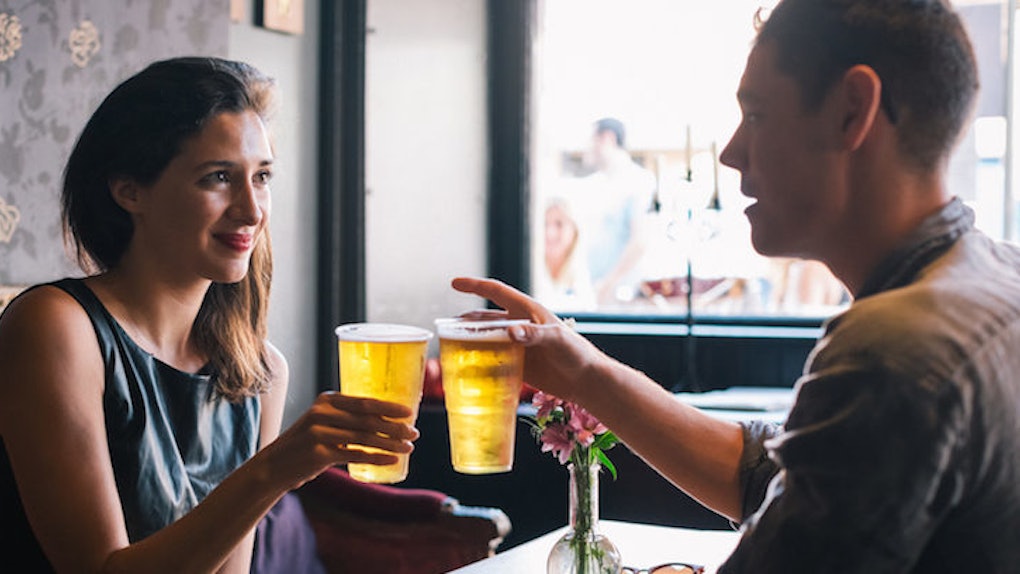 Exactly How To Ask Out Your Crush, Based On Your Zodiac Sign

Mercury in retrograde is making your energy weird, whether you agree or not.

Your zodiac sign influences the way you mix and mingle with the opposite sex, too. Hoping to make the first move in a new relationship? Read on.

Women taking the lead in asking a guy out isn't exactly foreign territory, but it is scary. Luckily, your zodiac sign can help you master the dating game.

Whether you'll slide him your number on a business card or call him directly (gasp!), it's all in the stars.

Your daring nature keeps you craving excitement. Any guy you have your eyes on won't be dull, whether you've just met him in a bar or have known him for a few months.

Since you love both mental and sexual stimulation, you'll throw a few, slight verbal jabs to see if he can spar with you.

A lady's got to keep things fun, right?

Your move: Seal the deal by sliding him your number with "Let's have dinner!" scribbled in lipstick.

You're a straightforward, nurturing girl who adores blunt honesty.

You'll drop some not-so-subtle hints to warm him up to the idea of dating you.

Send a few flirty glances, but don't beat around the bush too much.

Your move: Be direct in asking him out to the new restaurant that just opened in your city. That shouldn't be too hard. After that, the ball is in his court.

You're so restless, you can't even like the same guy for more than two days. Still, your eager nature means you're always ready to have fun with a new beau.

Want his company for a weekend bike ride and picnic? Lay the flirting on thick.

Your move: Be your usual quick-witted self and assert he can bring the snacks. Your mercurial nature tends to be fickle, so try your best not to change the plans last minute.

You're terrified of being rejected.

In all honesty, the likelihood of you mustering the courage to ask your crush to a house party is highly unlikely.

As you spend more time with your crush, you will come out of your shell. With time, you'll be charismatic and direct in attempt to sniff out a deep emotional connection.

Your move: Ask him what he likes to do for fun over the phone, then be sure to plan accordingly.

Like Aries, asking any guy out will be more about your infatuation than his. Honestly, you just love being the center of attention.

You're a go-getter. Luckily, you'll probably be able to recognize the guy attracted to your naturally affectionate personality.

Your move: Don't ask him out. Instead, tell him when and where to show up.

You have a sensual and sexual personality by nature.

Though you are communicative, allow your body language to do the talking.

Your move: If a potential date doesn't pick up your suggestive hints, ask him out with a direct text. Don't be surprised if he wonders whether or not you like him at all.

Your charming flirting is a neon sign of your interest, but you've already decided he won't make it to date three.

Your mind is made up, and that's that.

Your move: Buy his bar tab and leave your number with the bartender. Trust me, he'll be too blown away not to track you down.

You have a natural magnetism that will have your object of desire eagerly waiting to ask you out.

But, if he's still waiting for you to make the first move, actively pursue him.

Your move: Over FaceTime, ask for a game of one-on-one basketball. Like Virgo, use your body language to send the proper signals.

Keeping things light and carefree are your forte.

You won't need a deeply spiritual connection with him in order to chat over burgers and fries.

Your move: Because you're the light-hearted girl, say something cheesy when you ask him to take a hike with you. Don't to be too silly, though, or he won't think you're serious.

You'll want to be attracted to him intellectually before asking him out for drinks.

You're not one to be spontaneous, so this may be hard for you.

Your move: Buy tickets to a Broadway show he told you he likes. Send them over to his job and prepare for an immediate response. As a natural planner, you'll know the exact time it'll take each of you to arrive.

You can fake interest better than the rest of the zodiac.

Still, once you're feeling a guy, you'll prefer to approach him in a comfortable social setting.

Your move: Request to see him outside of work, but do it in person. Remember, don't be too chatty.

You're sensitive, so you're not especially excited to ask out a guy out. Fear of rejection is a real drawback for you.

If you feel safe enough to share your feelings, though, don't be afraid to turn on your magnetism and draw him in.

Your move: While you shop for healing crystals (of course), use your imagination and dream up a Pinterest-worthy way to invite him out. To an aquarium, perhaps?