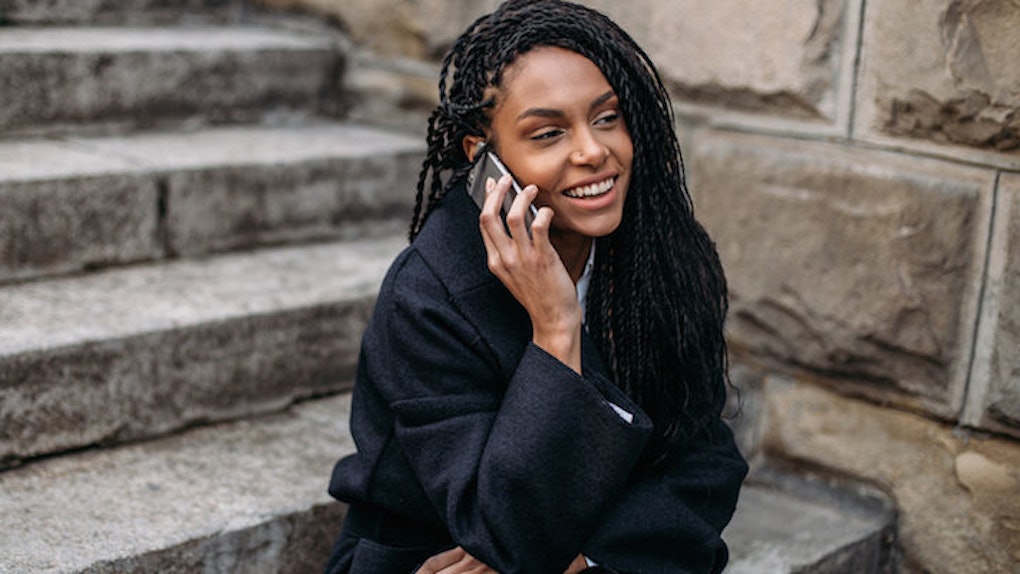 Why People Who Talk On The Phone Have Stronger Relationships

I’m not from the early 1900s. I’m not a terrible texter. Heck, I even used to call Drake on his cellphone, late night when he needed my love.

I just really, really like to talk, voice-to-voice. And, for whatever reason, I get a lot of sh*t for it.

Take, for example, a guy I recently met on Bumble. He wasn’t my type of cute — no tattoos, a little too skinny, wore hats in every photo. He did, however, love dogs.

When he finally got around to asking for my number, I gave it to him on the condition he wouldn’t text me. He promised to call me instead.

He did call me. Sure enough, a guy I initially felt lukewarm about became sexier than Drake’s biceps after arm day at the gym.

Ladies, we place a lot of emphasis on voice. So then, why do we always balk at the thought of talking to a dude on the phone?

Pry your hands away from your keyboard and listen up.

How long do we spend trying to craft the perfect text? It's all in order to come off as both funny and witty, but like we’re too cool to care.

Phone conversations force me to think on my feet. There’s no hiding behind a screen.

I can spend hours (looking at you, random Tinder dude I think is in the process of ghosting me) crafting.

Phones are raw and uncensored.

I’m a writer. I get paid to be articulate for a living -- on paper, anyway.

Anyone who's met me in person knows I’m so far removed from that.

On second thought, maybe I do sound like that on paper. Uh, screen.

My friends probably despise me. Whenever I need to meet up with them, I always prefer to call.

It's certainly better than sending a thousand messages trying to figure out where the f*ck they’re hiding and where we’re going.

Seriously, does anyone else’s BFF group chat revolve around you trying to find one another at a crowded bar?

“WHERE IS THE BATHROOM?"

Just f*cking call them, dude. Save some time.

You know what I hate? When my friends openly admit to screenshotting sh*t people send them so they can show it to others.

It makes me wonder if they're doing it to me, too.

Are they just immortalizing every autocorrect and emoji I send, passing it along to their other friends?

On the phone, what you say stays between you two. Can’t screenshot a phone conversation. Well, you can, but no one wants to spend $0.99 on those fancy recording apps.

You know how everyone says “it’s not what you say, it’s how you say it?"

Whoever said that has a point.

The other person will actually hear if I'm LOLing and notice if I mispronounce words. They’ll know when I'm truly interested in what they have to say and not just sending emojis.

They’ll fall in love with me, all of me, even the imperfect part of me that still can’t pronounce “Michigan” correctly.