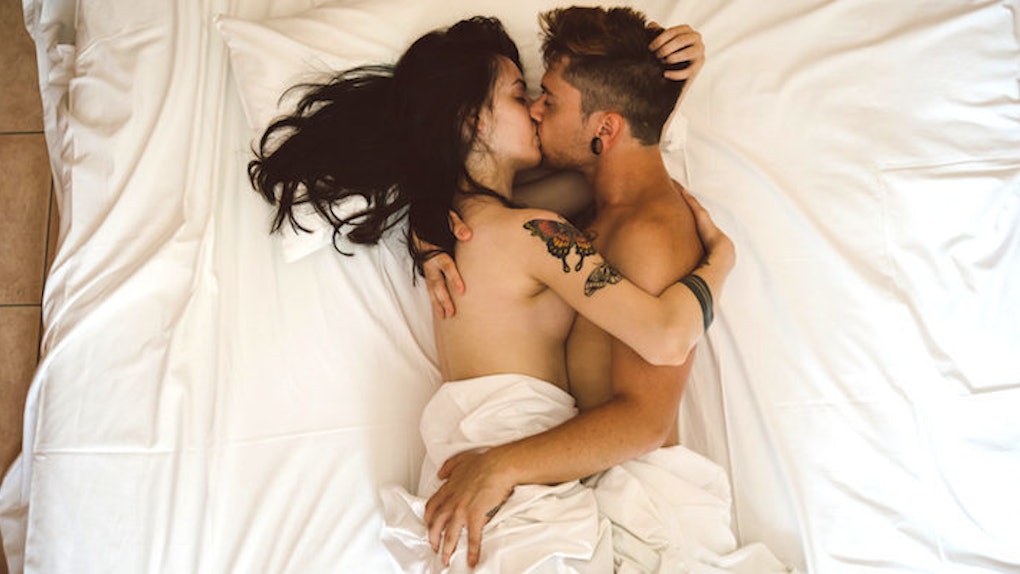 Get Freaky: The Dos And Don'ts Of Using Household Items As Lube

Let's discuss how movie sex and real life sex are two polar opposite ends on the sexy time spectrum.

Movie sex rarely involves condoms and lubricants — instead, it's all about the fake moans, giggles and two perfectly lit bodies writhing together like snakes.

Real sex is way messier than that: things don't go up (and stay up) the way they need to, the bed creaks like there's no tomorrow and sometimes, things are just a tad too dry down there.

While we have no idea how to fix the creaky bed, we do know how to make sure you're always lubed up for a good 'ol fashioned romp.

We're not just talking any $2 lube you can pick up from your local CVS, either — we mean the weird stuff you probably saw at Spencer's when you were 16 and laughed at because “only old ladies use that!”

Even if you don't have a vat of the stuff at home, it doesn't mean you're f*cked (or rather, not f*cked at all). You'd be surprised at how many ordinary household items can be used as lube.

Take a look at our favorite alternates below — and what you should never, ever stick down there.

As if you needed another reason to invest in a tub of coconut-y goodness. Not only is the stuff good for your hair, teeth and skin — but apparently, it's great for your cooch.

“This is a personal favorite,” said Dr. Yvonka DeRidder, a clinical sexologist working with Jasmin.com's #whatsyourfantasy campaign. "It's not only a great lubricant, but it is an excellent all-organic healthy option for the vagina and the penis alike!”

If you're not about swishing coconut oil in your mouth, just use it during naughty time. Dr. DeRidder praises the oil not only for its benefits to the skin, but it also passes along nutrients the body needs and uses throughout its use (plus, it smells good).

The only downfall? It doesn't work with condoms.

Do: Get freaky with yogurt.

When we first heard about this, we were grossed out, too. DeRidder is all about using Dannon, Chobani or whatever else you have in mind. “[It] could also increase the spontaneity of sexual play with food," she says.

The only thing you have to keep in mind, DeRidder says? Going with an all-natural option, as additional flavoring and additives can increase the risk of infection and irritation.

Yogurt is great for preventing and treating yeast infections. Score.

Do: Keep 'em sunny side up with egg whites.

“Egg whites create a consistency that is similar to mucus,” Deridder explains. “Assisting it in its travels to fertilizing an egg."

Anyone else craving an omelet right now? Just us? Okay.

Do: Like Rachael Ray and back it up with olive oil.

Rachael Ray, we're looking at you.

Deridder expressly cautioned to only use EVOO oil, as other types can harbor additives and chemicals, which are basically a recipe for an infection.

As with all household oils, she warns to keep an eye on what your condom is doing: they're known to break down rubbers.

Do: Started it up with Vaseline.

Basically, there's nothing a good 'ol jar of Vaseline can do. It's great to use because the smell is neutral, especially if you're not about smelling like a coconut or olives during sexy time. Just be careful with condoms.

Don't: Use the lotion.

Lotions: great jerkoff accessory for guys, but bad for our vaginas.

“Often lotions have chemicals and fragrances added to them that can irritate and increase the risk of infection, not to mention allergies you never even knew you had,” Dr. Deridder warns.

Sorry, but your fancy moisturizer is probably best used on your legs, not your hoo-ha.

Don't: Ham it up with soap and shampoo.

Feel the burn — and not in a sexy, post-workout quickie in the locker room kind of way.

“Something to remember — if it burns your eyes, it will most likely burn your privates,” Deridder cautions.

Don't: Spread the mayo anywhere but in your sandwich.

Here's a tidbit that'll make you lose your lunch: The main ingredient in mayo is egg yolk, which spoils super fast and leaves a nasty odor in its wake. The creamy consistency is also a hotspot for bacteria.

Now think about if you really want something you put in a sandwich anywhere near your vagina.