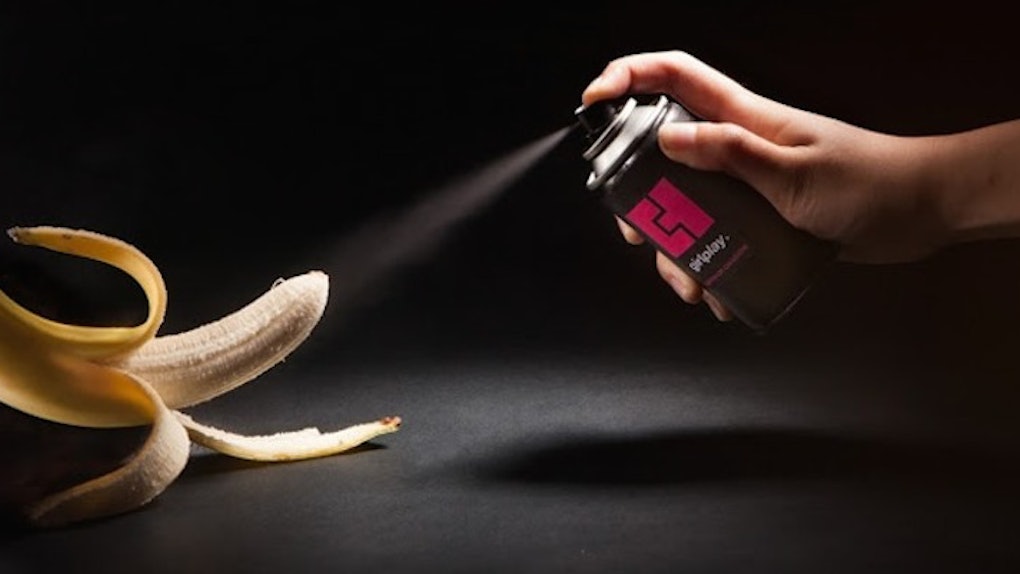 Packaging Of The World

Munson-Williams-Proctor Arts Institute student Michele Chu wants us to stop thinking of condoms like latex socks wrapped in matchbook-sized packages and start thinking of them more as gentle mists that come shooting out of spray cans.

According to a blog post for the product on Packaging of the World, Girlplay's mission is to change “the whole experience of love-making” with a series of futuristic devices aimed at taking sex into the 21st century.

[It] uses the latest technology to fit each and every size, for both male and female. These spray-on condoms are made for the perfect fit, and function like spray-on bandages in the marketplace today.

Admittedly, I have a few questions: Are they more effective than regular condoms? Are they easy to put on? How much cancer will this give me?

But, it seems like it could very well be something practical to use in the bedroom once the kinks get worked out.

Girlplay's spray-on condoms come in a futuristic package called “the Lovers kit,” and the package also includes bras, several regular condoms and remotes to control the condoms' effects. Additionally, the remote has the ability to unhook the bra with the push of a button!

The future is now!

This isn't the first time a company tried to make condoms sprayable.

According to Bustle, German entrepreneur named Jan Vinzenz Krause tried getting his version of sprayable condoms to take off in 2006, but it never went to market.

Probably because, as this video shows, it's the least sexy thing ever invented.

A few years later, a Chinese company named Blue Cross Bio-Medical tried getting a line of female sprayable condoms made with polyvinyl alcohol resin and nano-silver to market, but its product also never really came to fruition.

I hope no one would want to have something that sounds like it just walked off the set of “Terminator” sprayed into his or her genitals.

Citations: Spray On Condoms From Girlplay Might Revolutionize Safe Sex Plus 4 More Futuristic Inventions Protecting Us In The Bedroom (Bustle)