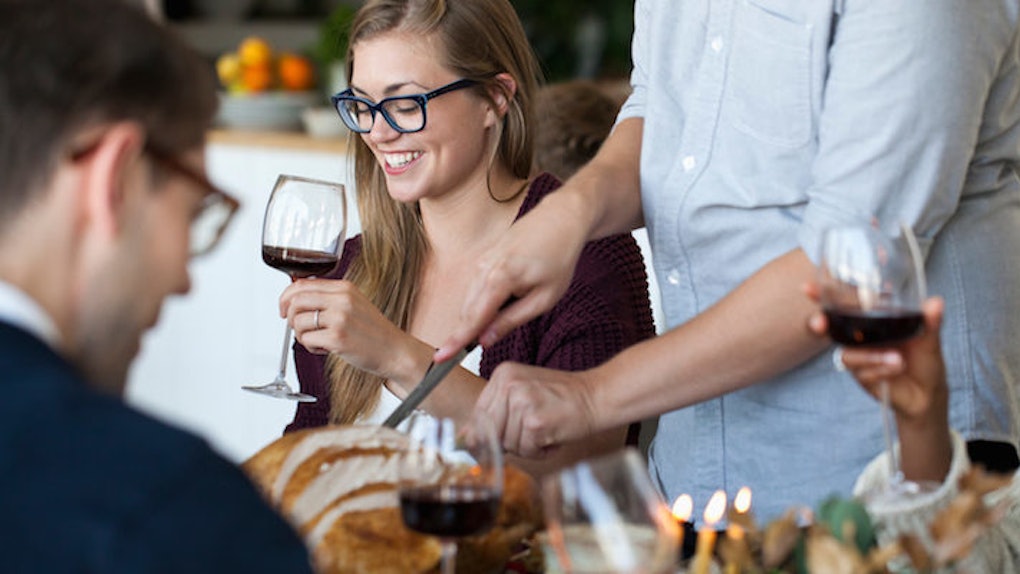 This Is Why Dieting During The Holidays Is Completely Pointless

’Tis the season when my inbox becomes saturated with things like dieting tips, ways to avoid gaining weight and the 47 kinds of miniature appetizers guaranteed to make me bloat.

It's barely the end of October and I’m already tired of hearing about holiday diets, spandex undergarments and waist-trainers designed to make me look like I’ve never inhaled air -- let alone food -- a day in my life.

When you think about it, the holidays should be the time of year you feel best about the person you've become. Halloween, Thanksgiving and Christmas are a time to enjoy rarely-appreciated relationships while sipping hot toddies and chewing on candy canes.

Unlike the average mid-week dinner, there’s no pressure to rush home. These are the only weeks of the year I don’t check my work email or think about deadlines looming. I choose to prioritize others over myself.

It follows, then, that I'd rather not drink a large glass of water or swallow a cup of broth before every party to avoid the dreaded extra calories of fancy food. I want to have my damn miniature twice-baked potato and eat it, too.

What I’m saying is this: Holiday diets must die.

Holiday dieting is a remnant from the age of sexism.

In my experience, the diet is an outdated idea, especially as I watch women care more about counting reps at the weight rack than calories in their dinners. While some eschew gluten and carbs, the majority choose to live with balance.

The concept of  "watching what I eat" will always call to mind a frustrated Betty Draper in AMC’s period drama "Mad Men." Her flawed character agonized over condiments and Weight Watchers points in an attempt to maintain the tiny waist that landed her two husbands in a row.

Our grandmothers and great-aunts watched their figures with beady, obsessive focus. They were taught that femininity and thinness were synonymous. Although there’s nothing wrong with working for a healthy weight, obsessive food tracking often does more harm than good.

As women of 2015, we're better than the diet. Christmas cookies aren’t a temptation for us, but rather a conscious decision. After a year filled with turning down extra desserts, a few frosted Santas are well-earned.

It’s about love and culture, not just calories.

For females, food is never just food. Each dish plays host to our emotions and nostalgia, built up like a seven-layer chip dip.

Holiday food, in particular, is more than just a meal (okay, three meals, when no one else is looking). Grandparents, aunts and cousins prepare favorite dishes with love. Not only is this your uncle’s sweet potato casserole on the dining table, but it’s also a recipe he saves just for his family.

Food brings people together, but rigid diets put up barriers. After hours preparing dishes, why look into your grandmother’s eyes and tell her you’re not interested in cranberry sauce? She’ll be hurt, the exact opposite of how she’s supposed to be feeling.

My father’s pizzelle cookies consist predominantly of oil and sugar, but it’s his chance to share a great aunt’s recipe while teaching his children about Italian culture. It’s not the cookie that’s important, so much as the act of making and munching them together.

One meal won’t ruin a year’s worth of work.

Contrary to the beliefs of many a college girl, healthy lifestyles don't just suddenly happen. It’s the result of countless choices to eat your veggie burger without cheese or skip the side of fries. Regular trips to the gym count, too.

That’s why it’s so frustrating when magazines and women-oriented articles treat each meal as if it’s the end of the world, encouraging a distinctly damaging view of food.

People who eat cake and cookies at Christmas don’t instantaneously become walrus-sized. (Furthermore, what do people have against walruses?)

Eating fatty food and tossing back a few cran-vodkas at the company holiday party doesn’t mean I’m “indulging” or “spiraling.” I may need to nap after Thanksgiving dinner, but if it’s the one meal I overeat in six months, I’m not doing too badly.

I’m still a healthy person. I'm in control of what I put in my body. The holidays are a time to be my best self, relaxed and happy. It’s impossible to do that while monitoring every ounce my weight fluctuates.

This year, let’s try a new strategy and calm the hell down about dieting. The holidays should be the best time of the year, not the most rigid.