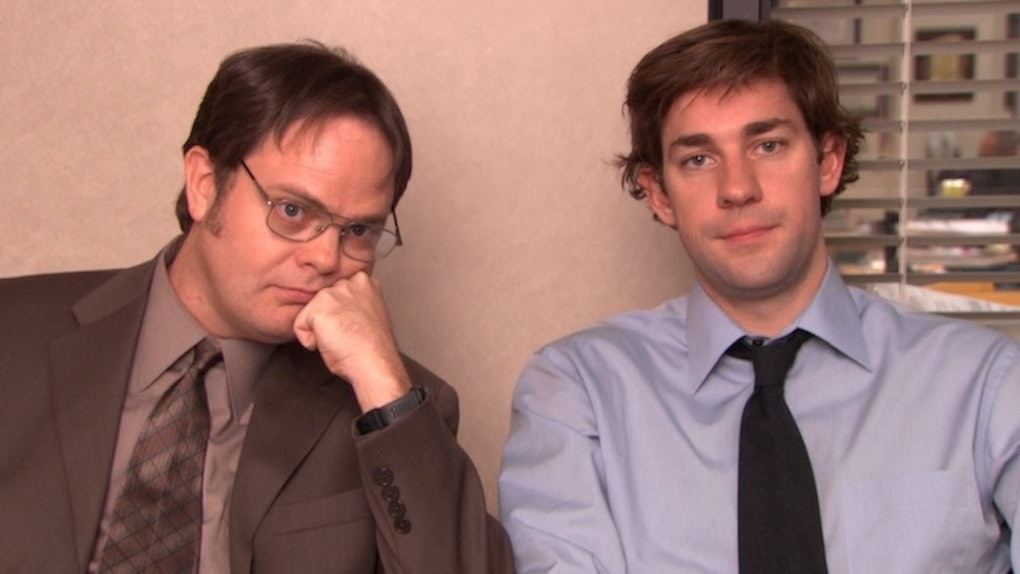 There is nothing better than finding a job you really love and working with a person or group of people you love even more.

Trust me, it's the best.

You don't dread coming into the office, and happy hours always seem like hanging out with friends rather than forced, awkward conversations about meetings and your day-to-day activities. You truly get along with everyone.

Sure, there's that one person who continuously has something negative to say about your work, but you have your Office Bestie -- OB, if you will -- to come to your defense.

When you introduce your friends from college to your OB, the word "coworker" just doesn't seem to describe what she is to you. She's so much more than that. This is the person you clinged to at your first company Christmas party when you barely knew anyone.

The person you can talk sh*t to and know your harsh words won't be repeated. You guys probably even drunk texted and confessed your obsession with one another after you finally exchanged numbers.

Basically, you can't imagine work without her.

But then one day, your OB says she has something to tell you. It isn't something she can send to your sacred, full-of-secrets G-chat, it has to be in person.

She tells you she accepted a job somewhere else and she just gave her two weeks. After this tragic news come out of her mouth, only one question comes to your mind: Who the f*ck am I supposed to get lunch with?

Coming from someone who had this recently happen, I can tell you it'll be OK. Things might not be the same, but just like Pam after Jim left the Scranton office, you can get through it.

Here's how to survive work after your OB leaves, and yes, it will be told entirely through "The Office" GIFs.

1. Take some time to mourn.

You're sad, and that's completely understandable. No one will blame you if you're a bit mopier than usual. They'd act the same way if their OBs put in two-week notices, too.

2. Remember this is professional, not personal.

Odds are, this person is probably leaving your company because she found something more appealing or professionally advantageous.

It's probably not a personal attack on you or your company. People leave jobs all the time; it's all part of the business world.

3. Throw yourself into your work.

She left the company, you didn't. You could put all your energy into being sad every single day, or you can take this as an opportunity to focus on your personal performance.

When you aren't distracted by as many inside jokes or lunch breaks, you will suddenly have extra time to finish that project you'd been avoiding or get that promotion you never thought possible.

4. But save some of that energy into making plans to hang out.

Now that you won't see each other for 8 hours a day five days a week, making plans will actually have to be done in advance.

Your schedules might no longer match up -- she's 9 to 5, and you're 11 to 7 -- so it might be harder than you would've thought. Impromptu drinks will be replaced with brunches planned two weeks in advance, and last-minute shopping trips won't be as frequent -- so you both have to actually text each other and plan something.

5. Accept there will be times you wish she was back.

Some days, you'll miss her absence more than other times. Like when something hilarious happens and you know she's the only person who would fully appreciate the hilarity of the situation. But it's a "had to be there" moment.

6. Make the effort to get to know the other awesome people around you.

The silver lining to losing an Office Bestie is getting to know your other coworkers.

Once your security blanket is gone, you're forced to step out of your comfort zone and actually talk to the other person who's been sitting next to you for the past six months.

You never know, your new best friend could be in another department, and you just never realized it because you were so wrapped up in your inside jokes.

7. And now you're officially real friends.

You can introduce them as such and it won't feel weird at all. She's the person you call when the AC in your apartment breaks or your first date went horribly wrong.

This is your friend who will plan your birthday party. The person who you'll text when you just had the worst day of your life. She'll always be your bestie, just not your coworker.