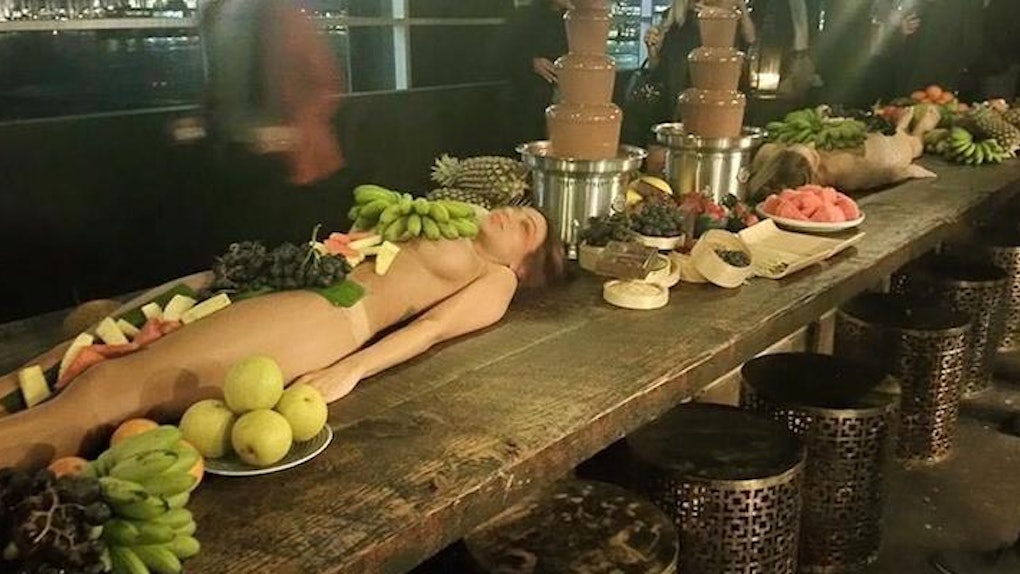 I'm Human Shaped: Why I'm Over Using Fruits To Describe My Body

I've always battled with my weight.

Before I moved to America, I was severely underweight. By the time I hit puberty, I was categorized as clinically obese. My weight rounded itself out to somewhere between "healthy" and "overweight" after that, and I've been fluctuating between the two categories since college.

Today, my weight is my weight and I'm not ashamed of it. But I don't want to broadcast it to the world, either.

At a professional event recently, a woman felt the need to ask what I thought about my curves. I've never met her before, the event wasn't about promoting body image or whatever -- she just felt the need to ask me what my opinion was on my thighs, ass and every other part of my body.

I said I couldn't complain, though I was totally bewildered. Is talking about one another's asses a thing people do at cocktail parties now? Should I start asking my girlfriends how they feel about thunder thighs?

Her response left me entirely dumbfounded:

"Yeah, you definitely got a pear thing going. You don't have an eating disorder, do you?"

In retrospect, I'm a little ashamed of my reaction. Instead of telling her off or politely saying "no" to the eating disorder accusation, I fixated on the one thing that shouldn't have bothered me at all: She thinks of me as a "pear." Or, at least, she thinks I have a body like one.

We're all very familiar with fruits and veggies being used to represent body types. Girls rounder around the middle are "apples," sporty figures are "carrots" and girls with a butt and wide hips are pears, like me.

Magazines have ingrained the fruit and veggie mentality so much, it's become common jargon. Instead of describing actual body parts like narrow hips and long legs, we say a sporty bikini will fit a woman's "carrot" body type. And everyone just nods and understands.

Fitness websites advocate "eating for your body type." Studies claim specific fruit-bodies are more likely to encounter certain diseases. Workout gurus suggest exercises tailored to your fruit shape. You are no longer a person, but rather a piece of produce. And, just as the glycemic index or nutrition facts will tell you, not all fruits are labeled equally.

What that does is belittle my curves and my look into a pre-packaged stamp. It's cuter to describe my body as a pear than to just say I have narrow shoulders, wide hips and a large ass. It's an easier pill -- excuse me, fruit salad -- to swallow, for everyone but the person you're labeling.

All the classification succeeds in doing is making my frame out to be cutesy and appropriate. What it doesn't take into account is my taste, my lifestyle or, well, much of anything. The amount of boyshorts I was recommended and the amount of wrap dresses I was told to buy just because I'm arbitrarily considered a pear by an unknowing magazine is kind of nauseating. In reality, I'll wear whatever black mini I want, no matter how much it accentuates my hips.

Instead of sticking to adorable fruits and vegetables or whatever other food group you want to dissect next, how about just calling it like it is: narrow shoulders, wide hips? Maybe we wouldn't have so much shame surrounding our bodies if we weren't so afraid of being honest about our appearances. Maybe we wouldn't feel so bad about our curves if we didn't try so hard to make them sound cutesy.

Instead of focusing on how a woman's body resembles a carrot, let's look to her real features, which are inherently more positive -- her long legs, her slim physique.

My curves, as I have spent the past few years learning, aren't made to be branded by anyone, no matter how well-intentioned or "cute" it comes out. What me and my pear hips can and can't wear is up to me, not you.

You can still say my ass looks like a juicy peach, though.