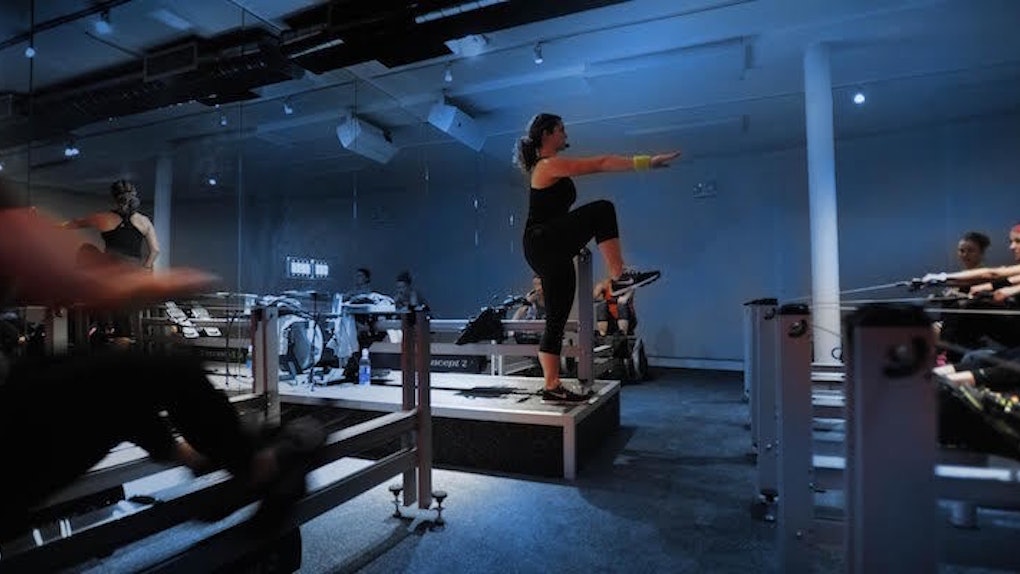 The first rule of Fight Club is not to talk about Fight Club. That's all fine and good for a bunch of sweaty dudes brawling in a basement, but the rules are a little different nowadays.

As anyone who's ever been to a fancy boutique workout class knows, the first rule is not to be late by even a second. Be 20 minutes early, if at all possible. On second thought, you should probably just camp out outside the door the night before to insure you don't get locked out.

Well, I was late. Ten minutes before my class at New York's Current rowing studio, I was five blocks away and sprinting toward the door. With minutes to spare, I pounded up the stairs and greeted my instructor, sweating. I have virtually no experience with rowing, short of the occasional canoe ride.

Current's been open since the beginning of February, and while the Tribeca space isn't large, it's clear meticulous planning has gone into optimizing the bright space. The walls are painted an Instagram-friendly white, with enough succulents and Diptyque candles present to make any lifestyle-blogger swoon.

As soon as I regained my breath, I was greeted by instructor Jules, a woman with shoulders so chiseled even Michelle Obama would pin them to her fit-spiration Pinterest board.

Ten minutes post-sprint, I sat down in the hard, plastic seat of a rowing machine in a dark room next door to the lobby. Though the studio was dim with ocean-blue mood lighting, I saw around 20 other machines. Jules strapped my feet into the machines's paddles, and showed me how to adjust resistance. Sitting around me was an equal mix of men and women, which came as something of a surprise.

And then, without more than a minute to settle in, Beyoncé growled the opening lines of “Formation” over the speaker system. Jules turned the lights down, and we were rowing.

For those, like me, who may think rowing is a fun thing you do in paddle boats on summer vacation, I must tell you you're wrong. This is Ivy League sh*t. As a crew, we pushed and pulled our way through sets of sprints, “power” pushes and ab-centric resistance exercises with Jules calling out our names in encouragement.

Starting with a kick out from the glutes, we pushed through the legs until our legs were straight, then heaved the handlebars backward with strength from our shoulders, arms and abs. I thought the Vixen Workout was a full body-killer, but I hadn't rowed yet. After 45 minutes of straining and exhaling, I let out grunts that would make Maria Sharapova blush.

Don't get me wrong, I wasn't a natural. After a few minutes, I found myself shaking out my wrists because of soreness building up in them. Over her microphone, Jules explained that it wasn't a “grip,” so much as a light curl of the fingers around the handles.

Apparently, Current regularly has an issue with stressed-out New Yorkers trying to chokehold their handles into submission. We just can't do anything nicely. Fuhgeddaboudit.

After I chilled out on the stranglehold, the soreness in my wrists ceased and I focused on the rowing at hand. When the strokes got tough, Jules spoke in the kind of community-based pep talk regular SoulCyclers will recognize: we were a team, she was enduring alongside us, we were stronger than we knew.

It's no coincidence, either. At $34, owner Josh Ozeri has competitively priced his classes in the SoulCycle crowd's range.

And, although 99 percent of my brain was syncing up my full-body movements, the remaining 1 percent happened to notice there was something very strange happening with the music. Imagine if your mom had about three glasses of wine and treated you to her iPhone playlist -- Beyoncé was followed by Justin Bieber, and then Billy Joel's “We Didn't Start The Fire.” We even did three minutes to Blackstreet's “No Diggity.” I didn't hate it, but it was a little bewildering to my overheated brain.

But, I will say this for the playlist: Class flew. And, the next morning, I woke with shoulder muscles, abs and legs that felt as if I'd run a half-marathon.

If you're looking to maximize burn while toning your full body and participating in the kind of community-oriented fitness class that's become so popular, I can't recommend Current enough. It's so cool, I'd even sacrifice a weekend to take a class with a friend, and that's my highest compliment.