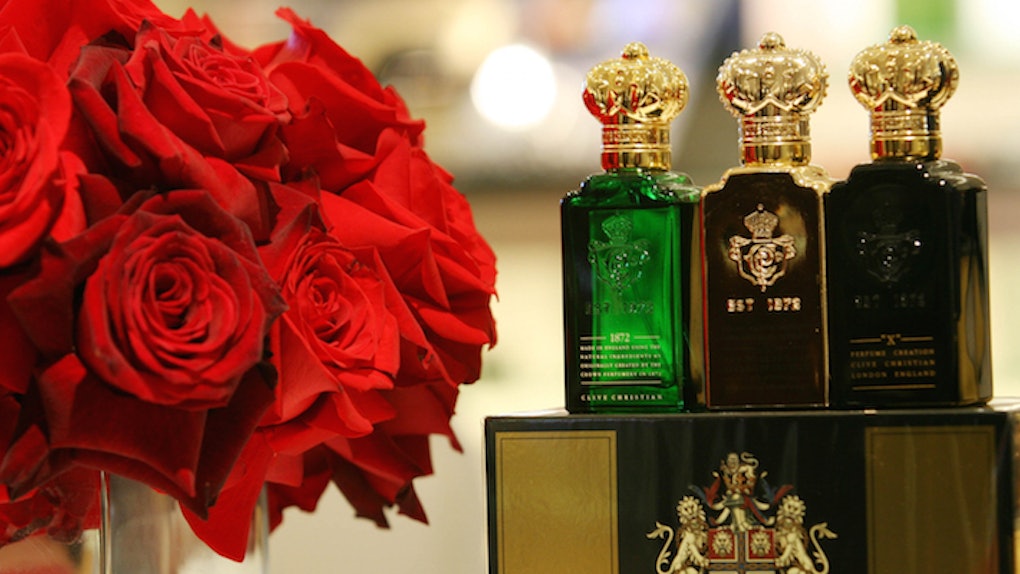 Clive Christian is the man who once created the most expensive perfume in the world, and he's not apologizing for it.

His website says it; his branded gift bags say it. In fact, you'd probably have to actually be blind or deaf in order not to know that's what he's selling. When I got the opportunity to meet him for the launch of two $550 fragrances, I fully expected to shake hands with Dr. Evil, petting his cat and smoking a cigar.

We met at his luxury press suite in Manhattan and, to my surprise, Christian is neither evil nor bald. He's a friendly man in a black sweater, and we chat comfortably. Christian himself doesn't ever mention his price tag until I bring it up.

With money being a major issue for many 20-somethings, I have a very important question to ask: Why should anyone under age 40 even consider his perfume?

I have about enough money for rent and takeout once a month. Why would I pour out my extra cash on what's (frankly) good-smelling water?

For starters, he tells me with humor in his voice, he's fully aware smelly water isn't for everybody.

We're off to a frank start, and I respect that. He seems to sense I have about $20 in my wallet, so he tells an endearing story about meeting a teenage shop girl who'd spent her own money to buy a bottle of his scent. He's never forgotten her because she definitely didn't have extra cash on hand to blow.

Young customers mean something to him because they're scraping pennies together to purchase his product, unlike the bankers and billionaires with their ready wealth.

Still, even an appreciation of a beautiful perfume isn't enough to woo me. I've splurged on perfume before, and the payoff wasn't worth it: You feel like Audrey Hepburn in the moment, but it all fades when you're crying into your Ramen Noodles late at night.

I can barely keep my iPhone from breaking, let alone a fragile glass bottle. What if I lose it all?

Plus, there's travel to consider. I try fragrances professionally and still haven't found one that can survive the New York City subway system without being overpowered by the scent of wet newspaper.

According to Christian, those problems are the result of what I'm buying. Mid-tier fragrances are made with synthetic copies of the roses and water lilies we love to smell in nature and often come as "eau de parfum" or "eau de toilette," meaning they contain less than 20 percent pure perfume.

These scents sit on top of the skin like Limited Too glitter body lotion, sparkling for a few minutes before disappearing entirely. You're left wondering if you ever smelled like orchids at all.

Perfumes made with natural fragrances, on the other hand, will last for hours because they're closer to oil than water. What you're getting is a barely diluted, up to 100 percent pure fragrance, one so fresh the company actually advises refrigerating it in order to keep it unspoiled. Clive Christian fragrances don't even come in an “eau de parfum” version.

Interestingly, Christian also sees luxury scent as a way to buy a fragrance that's all your own. Although every bottle contains the same recipe, natural scent changes once it's sitting on your skin.

[Natural fragrance] melds into your skin and will react with your body oils to produce something that is not noxious and the same as everybody else, but is very pleasant.

In other words: You can purchase the same Clive Christian scent as every single woman in your office, but it may smell completely different on you depending on your mood, body temperature and hormones.

When you say "signature scent," it won't be the same one everyone already purchased. It'll be truly and uniquely your own, like a love letter to yourself. Sexy, right?

But, still. There's the issue of a $550 perfume on the table, and I can feel my credit card sizzling at the thought. Christian can clearly hear the hesitation in my voice because he begins comparing luxury scent to collecting art.

In his Noble VII Cosmos scent, for example, there are 196 carefully layered elements. Like a Monet or a Renoir, some master perfumer creates and bottles an Impressionist painting for your nose using age-old techniques.

Actually, when compared to an original Renoir painting, Christian's perfume looks practically budget-friendly. It's all about the way you look at things.

In the moment, though, I'm looking at the Noble VII bottles. They're topped with Christian's signature gold crown, nestled on a bed of red velvet inside a leather box.

No expense has been spared on a style that's reminiscent of heavy drapery in a great-aunt's house, and it's evident.

Finally, we arrive at the crux of Christian's argument: His fragrances aren't just scented water at all. In fact, they represent the beginning of a total life change. Unlike taking up SoulCycle, however, this shift will cost you dearly.

If you've stopped buying H&M in order to purchase ethically (hi, Everlane!) and understand that fewer, high-quality shoes are better than throwaway flats, then you might be ready for Christian's product.

Go to the department store and try it. But do go without some cheap perfume on. That's really silly… Change the way you look at life. Don't smell of perfume at anything more than an arm's length. I always say perfume should be a little bit closer than a handshake.

Less is more, especially when the bottle costs hundreds of dollars. Christian challenged me to use unscented soap and avoid washing my hair before giving his fragrance a try. Essentially, I'd be purifying myself for the most expensive liquid ever to sit on my skin.

In the interest of science, I give the fragrance guru's technique a try the next day using a press sample of his Cosmos Flower scent.

Thoughtlessly, I wash my hair that morning then experience regret akin to missing my mother's birthday (you'd be surprised how hard it is to rid yourself of every $6 fragrance). I spritz both wrists and my neck, afraid to use more than $10 of a perfume half the cost of my monthly rent.

And, throughout the day, it's there, humming subtly around my body. No one notices except me, but isn't that the point of luxury?

By nighttime, I still can't register the scent as anything more special than what I've purchased at Sephora. Then again, maybe that just means I'm not ready for Christian's life change.