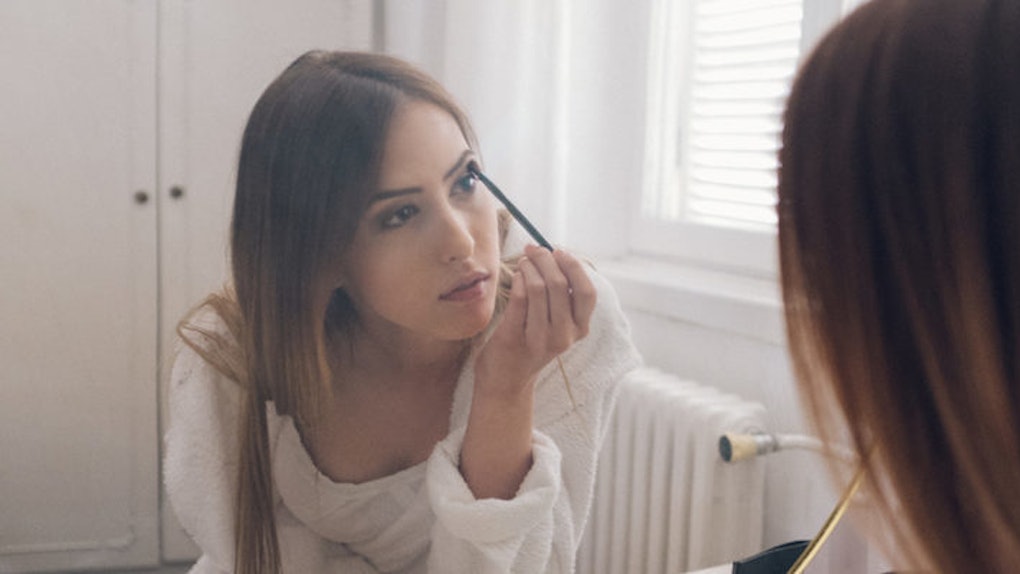 Shaky Foundation: The Complicated Relationship Girls Have With Makeup

Growing up, makeup seemed like a rite of passage.

In fact, one of my fondest memories from my childhood was parading around in my mother’s oversized heels -- stark naked -- with a poorly executed makeover.

Makeup had been just a game of “pretend.” My view of makeup was very black and white.

Either I was “myself,” or I was “playing dress up.”

I started wearing makeup at 13. It was old enough for my mom to tolerate it, but young enough that it was still very new and exciting.

I didn’t understand the point of it. I just wanted to wear it.

It didn’t look very good, but I rocked my thick black eyeliner and poorly applied foundation because to me, makeup was an ode to adulthood.

In middle school, most girls started wearing makeup. By high school, being seen without makeup was worthy of an interrogation.

No one would ever blatantly ridicule someone for being seen without makeup. Instead, the acknowledgement of its absence was incentive enough to never been seen without it.

I noticed a change in myself from childhood to adolescence. Initially, wearing makeup was a way for me to “walk” in my mother’s shoes: literally and figuratively.

Makeup had initially been a choice. But as I matured, it became a sort of choiceless choice.

Before, I’d felt complete without makeup. But now, I felt like I wasn’t myself without it. The line between make believe and reality had officially blurred.

My choice to wear makeup was almost never influenced by my desire to attract men. I would instead argue that I was largely influenced by my friends, who had also fallen victim to the idea that beauty in a bottle was more valuable than natural beauty.

The media didn’t help much either.

It wasn’t until my senior year that I was able to gain meaningful insight into my makeup usage.

Back then, I played sports all the time. At first, I made a huge effort to look “presentable.”

But then, I noticed something. Almost all of my teammates didn’t wear makeup.

It was the first time in a very long time I felt uncomfortable wearing makeup.

At first, it was weird seeing them on game days without their makeup. I remember how surprised I was to see they looked almost the same, if not prettier.

When I’d ask them about it, they would make some sort of self-deprecating comment about how their appearance wasn’t comparable to how they looked with makeup. They were so blind about how beautiful they truly were.

More often than not, our insecurities are virtually invisible to others.

Yet, we try to go about them as if we’re alone in feeling this way. This key insight sparked my curiosity as to how much of a difference makeup really made.

Nobody seemed to even notice when I didn't wear makeup. Maybe makeup wasn’t worth the hype after all.

Makeup has become a sort of psychological fetter that determines whether someone feels beautiful and worthy of love.

In my adolescence, I had evaluated my beauty based on a catalog of makeup products and not my natural worth. While men sometimes joke they feel cheated by women since “makeup is false advertising,” I would argue wearing makeup is really cheating yourself.

Makeup cheats your natural value and your wallet. Take a second to think about how much money other people have been making off our insecurities.

It kind of seems like the same people trying to “cater” to our insecurities are also the ones profiting off them. Not to mention the fact that all the time we invest in applying it could be used to better our future, and not just our appearance.

I understand there are legitimate reasons why people wear makeup. They may want to cover up unsightly blemishes or color correct redness. I regularly look to makeup for the same reasons.

The real issue is not with the makeup itself, but rather, the motivating factors.

Makeup should help enhance the beauty that is already there, not compensate for what you may feel is missing.

I understand it’s unrealistic to assume everyone will stop wearing makeup.

My only hope is women will start to search inward for their self-worth, and not the aisles of a cosmetic store.

I wish I had realized, as a child, that the makeup and the heels aren’t what make a woman exceptional. Her confidence in the way she carries them does.