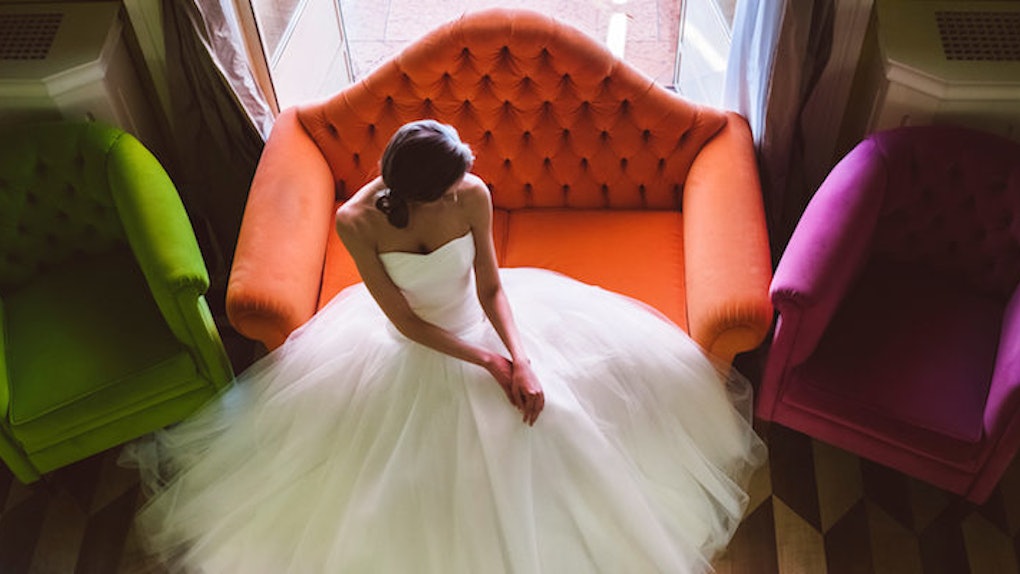 Millennials On Marriage: Why We're Hardwired To Find Ourselves First

The first time I idealized marriage, I couldn’t even perform addition with double-digit numbers.

I had been serving as a flower girl in one of those early 2000-fairytale occasions, complete with countless rhinestones, white tulle and the song, “I Hope You Dance” by Lee Ann Womack.

In that blissful era of childhood ignorance, I made the promise to myself that I too, one day, would be the princess, clad head-to-toe in creamy-hued silk.

Simple math may have been opaque, but marriage, now that was as clear and cut as a diamond ring.

The truth is, getting married is still defined as a cardinal “ultimate” for women.

As a single lady in her 20s, I can tell you that living under this pretense is a lot like toting around a giant rash or some other gross, manageable disease.

On the best days, you’re only vaguely aware of its itchy presence.

On the worst, you find yourself buckling down and giving Todd from HR or Brian from that smoothie joint a shot because “you just never know” if he could be the one with the magical cure.

At this point, I’ve dated several subpar, “forever” candidates in the interest of knowing.

There was the J. Crew guy obsessed with boat shoes and vanity, the musician with no direction and a bogus degree and the comedian with a palpable Napoleon complex.

In all of these situations, though, I was aware of the grim outcome.

I could have tossed them like burn phones in a matter of minutes, and yet, the relationships would end up kicking for months until resentment rendered them irreparable.

I was on a (not so) merry-go-round of men, and even though the motion made me nauseous, I felt stuck.

I used to think it was just because I could give them the benefit of the doubt. If I was self-conscious about a height difference, I was being too shallow.

If he bashed my favorite artists, I wasn’t being open enough. If he didn’t get my jokes, I just wasn’t appealing to the humor of the general public.

The excuses I used to keep my relationships alive were as ridiculous as putting Band-Aids on amputated limbs. I could easily consider myself at fault (and certainly had no qualms with placing all blame on him), but I ignored the most important aspect of what was wrong.

Realizing my “soulmate” wasn’t the guy I had to stick it out with after only a few weeks of dating, surprisingly felt too much like giving up on the notion of “you never know.”

After spending my formative years attending functions particularly heavy on booze and estrogen, I was programmed into the mindset that the worst thing a woman can do is be too choosy, or jump ship too quickly.

Doing so sets limits. It places big, fat "x" marks through your list of possibilities. In the end, those things simply made you less marketable for marriage.

However, the older I became, the more I realized, a room filled with wine-buzzed women isn’t an advice forum.

The common ending statement of, “Don’t worry, you’ll find him,” wasn’t a source of comfort. They were just fueling that familiar, festering itch.

My emotional revelation came on a Tuesday night, as I lay in a hospital bed recovering from a clumsy accident.

I was alone, raw from the insanity of the past 24 hours and completely vulnerable to my own feelings.

I had just been visited by my flavor-of-the-month, and was surrounded by sweet, edible tokens of his well-wishing.

I dove into a candy bar solely for some consolation, and noticed that the sensation was as dull as biting into cardboard.

I began to quietly sob, choking on chocolate and the fact that even the most saccharine things in life meant zilch without the support of something with substance.

Sure, it could obviously be that the anesthetic I had been breathing in for hours was screwing with my senses, but the metaphor behind the taste of nothing acted as a heavy-handed slap in the face.

Up until that point, the largest parts of who I was rested on wasted time, romantic risks that clearly outweighed any reward and a wispy, haphazardly-formed daydream of what love and marriage actually were.

I woke up the next day so changed, I could have been a hippie who spent hours sitting in a sweltering desert tent, sweating out all of her demons.

Instead of peyote and some Native American folklore, the catalyst to my renaissance happened to be a peanut butter cup.

Along with that Reese’s wrapper, I threw away all of the arm candy, an overplayed copy of "27 Dresses" and the idea that marriage had to be my “ultimate.”

I am still not perfect.

I would be lying if I said I was still not in awe of the craftsmanship that goes into planning a wedding, and the idea that two people can be together for life.

However, involving others in your own, personal goals is a fickle path to take. It often leads to disappointment.

I stopped letting my imaginary Prince Charming govern my future, and most importantly, my identity as a woman.

Now, as I explore this most exciting part of young adulthood, I don’t look for my husband at every corner.

I enjoy the walk, and accept true love from wherever I may be lucky enough to receive it from.