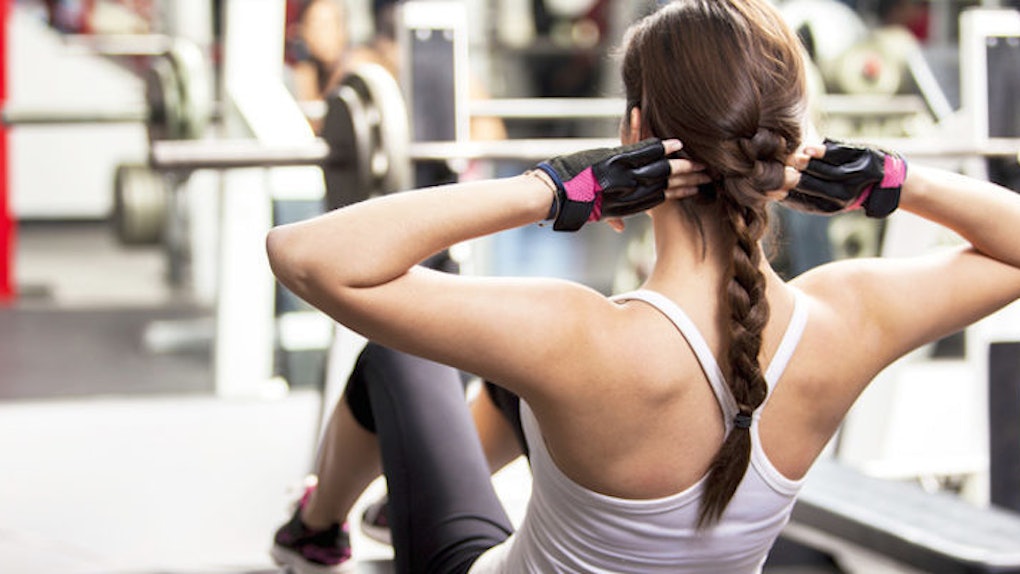 For the spring semester of my junior year, I packed up my yoga mat, P90X DVDs and as many clothes as I could feasibly squeeze into one suitcase and flew to Australia.

Six months later, I packed it all back up and headed home.

But, I took something else home with me: 10 pounds of pudge.

Though I ran in the morning with roommates, swam as much as humanly possible and regularly practiced sunset yoga on a cliff overlooking the beach (Jealous much?), I still managed to increase my size in a matter of months, thanks to a lot of alcohol and late-night snacking.

My plan to shed the weight once back on home turf? Two-a-day workouts.

But is my newfound devotion to the gym safe?

We talked to experts to find out whether or not being a double gym rat is a total no-no.

My goal was to lose weight, but that’s not every double exerciser’s motive.

There’s a range of reasons why people choose to visit the gym more than once in 24 hours, such as building muscle or training for a tough race.

And while research shows regular exercise is essential for leading a healthy life, for some people, one workout a day doesn’t fit the bill.

Plenty of studies have compared the health effects of working out once a day — say, for an hour — versus splitting up the workout into two 30-minute sessions or even shorter bouts of exercise.

When it comes to adiposity (body fat), blood lipids and psychological well-being, it’s unclear whether working out once, twice or even three times daily makes a difference.

The reality is, our bodies are generally more responsive to the intensity of exercise rather than just how long we’re pounding the pavement or swinging a kettlebell.

Before we start reprimanding the ardent gym goer, it’s important to recognize working out two or three times a day doesn’t necessarily mean each session is super sweat inducing.

If a second workout involving lots of stretching and light calisthenics doesn’t raise your heart rate the same way a long run would, then two-a-days may not be much to worry about.

It all comes down to two elements: intensity and intention.

And ultimately, it’s different for everyone.

Two-a-day workouts can be especially useful, and if used wisely, might lead to safer, more effective training.

Don't forget: There's a reason elite athletes often work out two or more times a day when training for an event.

A highly conditioned, world-class athlete would be able to safely handle multiple training sessions in one day. But a middle-aged person of average athletic ability with a full-time job and family probably wouldn’t want to plan a regimen that involved multiple daily sessions at the gym doing heavy strength training.

For someone just trying to stay active and reap the benefits of exercise, Edmonds says working out twice a day isn’t necessary.

However, it is okay to try if it’s done right.

Ramp up intensity, duration and frequency carefully, since small steps will help prevent injury and allow the body to recover.

Most of us should probably avoid two consecutive vigorous or long workouts in the same day — such as running 10 miles then hitting up a cycling class — to avoid what’s known as overtraining syndrome.

Most people do one workout in the morning and one in the evening because it makes the most sense for their schedules.

There’s no exact rule of thumb, though some trainers advocate two days between workouts involving the same muscle group.

If performance starts to decrease from workout to workout, it’s probably a good idea to take a few more rest days.

Check out this guide to workout nutrition to make sure you’re capitalizing on that last gym session.

And don’t forget to hydrate. Water is just as important as a protein shake.

In fact, exercising when the water tank is low can cause greater damage to muscles and make it harder for them to repair.

Studies suggest too little and poor-quality sleep can make it harder for us to recover and perform during future workouts. (Check out these super easy ways to sleep better tonight.)

Treat yourself to a little self-myofascial release with one of these recovery tools.

And take a day off. If you’ve put in a ton of hours during the week running and weightlifting, there’s nothing wrong with taking a break.

A day off doesn’t mean you lounge on the couch all day, but a walk with the dog or some light stretching will help you prep for upcoming workouts.

There are advantages to working out multiple times a day.

Morning people may exert more effort right after waking up, while night owls may prefer to save a tough workout for later in the day.

Thirty to 45 minutes twice daily equals 60 to 90 minutes per day, which allows for more flexibility for people with busy schedules. And for beginners, breaking up exercise into smaller workouts can be less daunting.

At the end of the day, it doesn’t really matter how many times we work out, but the way we do it — which body parts we train, the intensity of each session and how our bodies respond — certainly does.

If your aim is two-a-days, just make sure to play it safe and watch out for signs of overtraining.

This article was written by Nicole McDermott for Greatist.