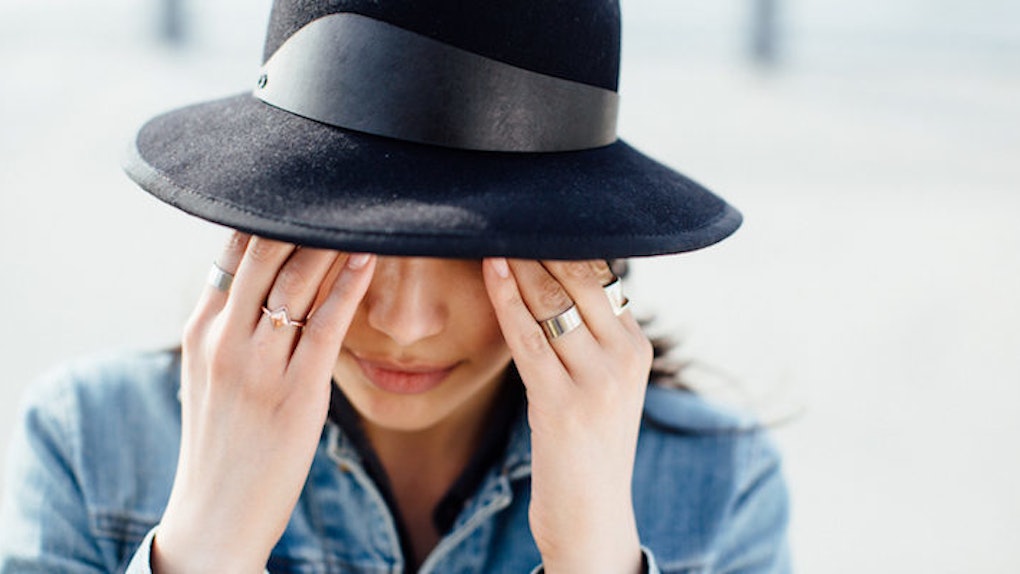 It's difficult to try to explain to a person ignorant of trichotillomania why your $10 mascara is your favorite, most prized possession. She doesn't understand, but with good reason. To her, adorning her lashes is a natural, everyday ritual. It's not much different from brushing her teeth or washing her face.

She wasn't there when you were still a small child, tugging out your eyelashes with no concept of what that meant. You just knew that something in you felt you should. Your mother threatened you, pleaded with you and demanded you stop. There were no studies, no Internet searches and no networks to join. She had no idea what you were doing, or why. Mom was powerless to stop you, and you didn't understand why you were in trouble for doing something that felt natural.

She wasn't there when you grew out of picking your nose and biting your nails, but still couldn't manage to stop pulling. By now you knew that this was frowned-upon behavior, but it felt good to you, like scratching an itch. You couldn't stop, and you didn't really care. You didn't feel ugly yet. You were homeschooled, and there weren't any kids around to call you a freak or make you feel bad about yourself.

She wasn't there through your mother's ill-advised tactic of shaming you in front of friends and family to try and stop you. It just made you feel worse, exposed and betrayed by the person who was supposed to protect you from harm. It didn't change your behavior.

If anything, you became increasingly anxious and self-conscious, pulling more than before. At this point, it was only your lashes. Your eyebrows looked normal. Maybe it's not that noticeable, you told yourself. Then, your mother stripped that hope away.

She wasn't there when you started going to public school after your parents divorced. It was eighth grade, and you knew nothing about the social dynamics of middle school. You'd been going through a lot, and the pulling got worse. You'd started in on your brows, and your lashes were in sad shape. People at school started noticing, and kids are cruel.

They began making fun of you, taunting you and asking you what happened to your face. You didn't know what to do or how to defend yourself. By now, you had no mother figure in your life. You moved in with your father after the divorce. You and your mom had become estranged. You had no one to turn to or teach you what to do, so you became depressed and reclusive.

She wasn't there when you began wearing dark makeup to try and hide your problem. You wouldn't learn to apply eyebrow pencil until years later, so for now they remained awkwardly pencil-thin. High school is torturous enough without a physically disfiguring condition that even you don't understand, and you struggled. You did have friends who cared about who you were on the inside, but you remained shy and insecure. You didn't date. Ever.

She wasn't there when you did date, in college. You met a wonderful, handsome guy who improbably loved you just the way you were and you stayed with him for four years. You did not believe that any other man would ever accept you the way he did.

You held on long after the relationship was dead. You were young; you didn't know any better. When he finally broke up with you, it took you months to get over him. You thought you were ugly, and he had seen you as beautiful. You couldn't handle losing that.

She wasn't there when you moved to Los Angeles to pursue acting, despite your affliction. You had periods of temporary recovery in the past, and you told yourself you could do it again. Then, you let your breakup and your excuses sidetrack you for years.

You put off pursuing the one thing you cared about because you were ashamed and insecure about your looks. You had no idea how you would ever face a make-up artist or explain why you could never go barefaced. No one had ever seen you without make-up, not even your college boyfriend. By now, eyebrow pencil and eyeliner were simply a part of the physical mask you wore to try and hide your pain.

She wasn't there when you made the difficult decision to go ahead and try to pursue acting, despite your fears and shame. She didn't hear your awkward conversations with agents, directors, teachers and make-up artists. She never saw you sitting alone, pulling with defiant self-hatred or simple nonchalance.

She never saw you curled up in the fetal position, sobbing with impotent fury at your own inability to stop. You knew better, and yet you just kept doing it. You knew it was ruining your life, making you miserable, destroying any chances you had at a career and you couldn't stop. This felt unbearably idiotic, and you detested yourself.

She wasn't there through the few periods of remission, the times when you actually stopped pulling long enough to develop a full set of eyelashes, only to ruin it all yet again. Those were the hardest times; it was incredibly difficult not to loathe yourself for this. You know you can't help it, but you feel that you should.

How hard can it be? It was something so simple and yet so agonizingly difficult. Your 20-something years of suffering were enough of a testament. She wasn't there when you realized that the endless pulling had taken its toll. No matter what you do now, you'll never have thick, full lashes. You'll never have eyebrows that grow in enough for you to go without eyebrow pencil. You've done permanent damage, and  you must live with it even if you do manage to stop pulling for good.

She's here now, when you're experiencing a time of growth and stability. She doesn't understand because she doesn't know. But, you can change that. You can explain to her what trichotillomania is, and how you've suffered from it for years. You can open her heart by teaching her to sympathize and understand instead of to judge.

If there's one thing you can do with your experience, it's to educate and inform. It's easier to do this when you are in a recovery period, but find the strength to do so when you're going through the dark times as well. There will never be understanding without education.

Demand to be loved and valued for who you are, not for some weird patches of hair on your face. You've spent so many years hiding because you're afraid of what others think of you. Love yourself and value yourself enough to know this: You are not your eyelashes or your eyebrows. You are not the hair on your arms, your head or wherever else you feel it's necessary to pull. People judge because they don't understand. Edify them.

Know you are beautiful, with or without your lashes. Your journey is beautiful. Your strength is in embracing and accepting who you are. That's beautiful. Never let anyone else tell you otherwise, you sweet, vulnerable trichster. Never.