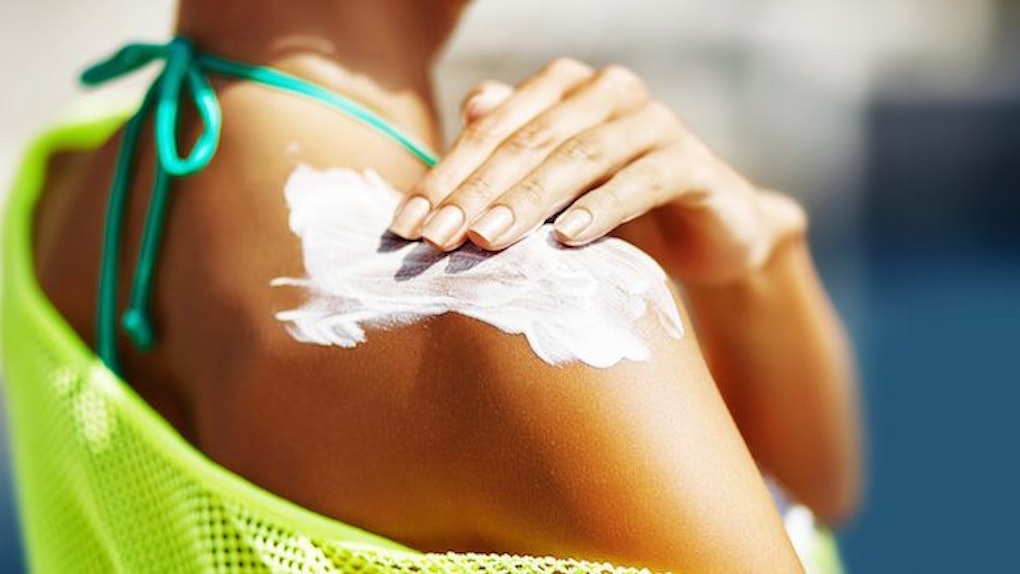 I've been programmed to lather and layer on a high SPF since I was a toddler and while pausing to reapply is definitely worth it to avoid potential burns, science says there could soon be an alternative method that wouldn't require re-application. According to new research, sunscreen made from DNA will ensure you never have to reapply again, and while I can't speak for everyone, my paste-white skin is definitely here for it.

The study was published in the journal Science Reports and details how biomedical researchers from Binghamton University in New York exposed a liquid solution of salmon sperm DNA to UVA and UVB rays in order to assess how the film responds to radiation. Co-author's Guy German, Alexandrai Gasperini, and their colleagues used a spectrometer to control the amount and wavelength of ultraviolet light the DNA was exposed to at any given time, as well as measure the effects each one had on the film.

The results were promising, as up to 90 percent of UVB light was unable to make it through the DNA sample.

We discovered two possible mechanisms. One is called hyperchromicity, that is the increased ability of DNA films to absorb UV light, but also we found that the results that we got suggest a crosslinking density of the molecules themselves.

Normally the longer you're in the sun, the more often you need apply. This new innovation, however, encourages the opposite. The DNA grew more crosslinks the longer it stayed under radiation, meaning the longer the film was exposed to the sun, the stronger the protective barrier becomes.

One application fits all? Sounds good to me.

I can apply and reapply my staple sunscreen multiple times throughout the day and still expect a slight burn at least 50 percent of the time. Maybe this has less to do with the sunscreen, and more to do with formulation in general.

Because my skin is just so pale, I used to drown my skin in SPF 100 on my way to the beach or grocery store to ensure optimal protection. Little did I know the difference between SPF 100 and, say, SPF 30 was how much cash I'd be shelling out for one bottle over another.

According to the Environmental Working Group:

Sunbathers often assume that they get twice as much protection from SPF 100 sunscreen as from SPF 50. In reality, the extra protection is negligible. Properly applied SPF 50 sunscreen blocks 98 percent of UVB rays; SPF 100 blocks 99 percent. When used correctly, sunscreen with SPF values in the range of 30 to 50 will offer adequate sunburn protection, even for people most sensitive to sunburn.

So while you still need to re-apply your sunscreen until this new DNA formula is bottled and sold in your local super, you need not apply the highest SPF on the shelf for optimal protection.

Note: Sun protection is not summertime exclusive, and should be implemented into your skin care routine year round.