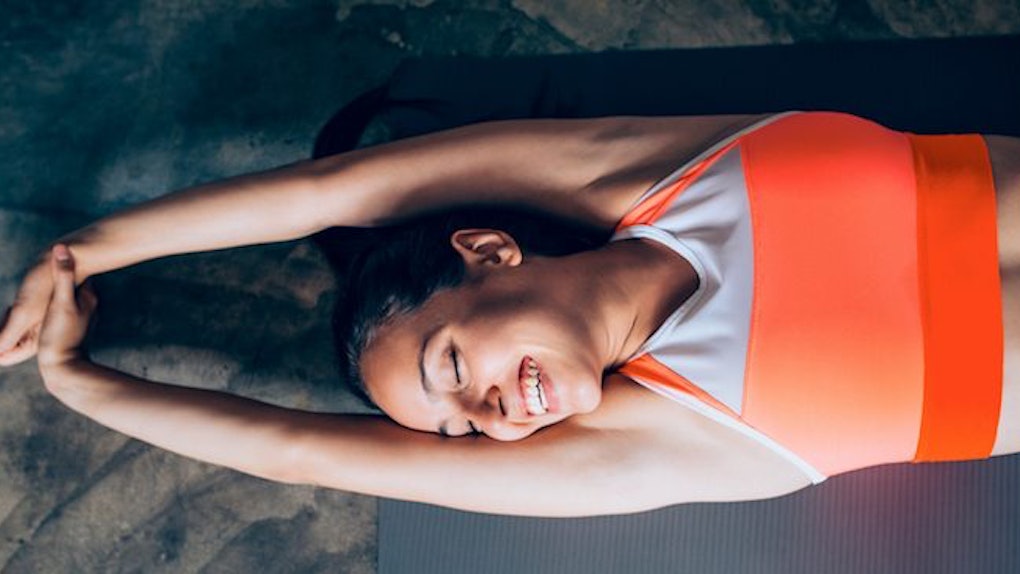 Positive Thinking Can Change Your Workout Results, According To A New Study

If you've ever found yourself in a workout rut, it's easy to dig yourself deeper into that hole and lose the motivation that once kept you going. Maybe you feel like you've hit a plateau, or perhaps you've lost sight of what your fitness goals were in the first place. Either way, you may be surprised to realize a change in your mindset can make all the difference in the results you'll see from your workout.

A new study on the power of positive thoughts when it comes to fitness progress might just help you find that extra boost you've been searching for.

According to the research, which was published in the journal Health Psychology, the way you think about your workouts may have actual effects on your well-being and overall health.

The study looked at over 60,000 adults over a 16-year period, examining not just their level of physical activity, but the ways in which they thought about their overall health, as well.

The results showed that kind inner thoughts about where you are on your fitness journey are just as important as caring for your body physically.

The researchers found that people who compared their gym progress to those around them -- and, as a result, began to think they were less healthy than those who did "more" than them -- were 71 percent more likely to die sooner than their counterparts (even if their fitness levels were exactly the same).

Elite Daily spoke with personal trainer and basketball coach Carmine Rotolo to get his take on the comparison game that often plagues both athletes and fitness fanatics alike.

Rotolo says, since he works with athletes, he sees comparison and competitiveness on a daily basis.

He even admits falling into the comparison trap himself from time to time, as it is simply human nature to do so:

We all want to measure ourselves to gauge where we are compared to others. [This study] just reinforces human nature and the essence of competition.

And, before you worry yourself sick, you're not going to drop dead if you start feeling bad that your BFF went to SoulCycle three times this week, and you've only been able to squeeze in a mediocre 10-minute ab circuit.

But it might be time to shift your perspective and give yourself credit for the incredible things your body does for you each day.

The researchers stress in their study that the majority of people actually underestimate how active they really are.

So quit selling yourself short! Chances are, you, too, are not giving yourself the credit you deserve.

That "mediocre" ab circuit is a lot more significant than you think -- especially tacked on to all those daily activities you already do, like grocery shopping, walking your pup, or running to catch the A train (yep, "every day activities" are all considered active AF).

Bottom line: If you treat yourself negatively and don't give yourself credit for your own fabulous fitness routine (no comparisons allowed), your body will probably respond in a similar way, with resistance and sluggishness.

Celebrate all that you do and where you are in your fitness journey.

Because, as Rotolo says, the greatest obstacle you're likely going to face is yourself:

Being positive is much harder than being negative, and negative self-talk will wreck everything if we allow it to. But if we use it as a positive motivator, it will help us break through and achieve things we never thought possible.