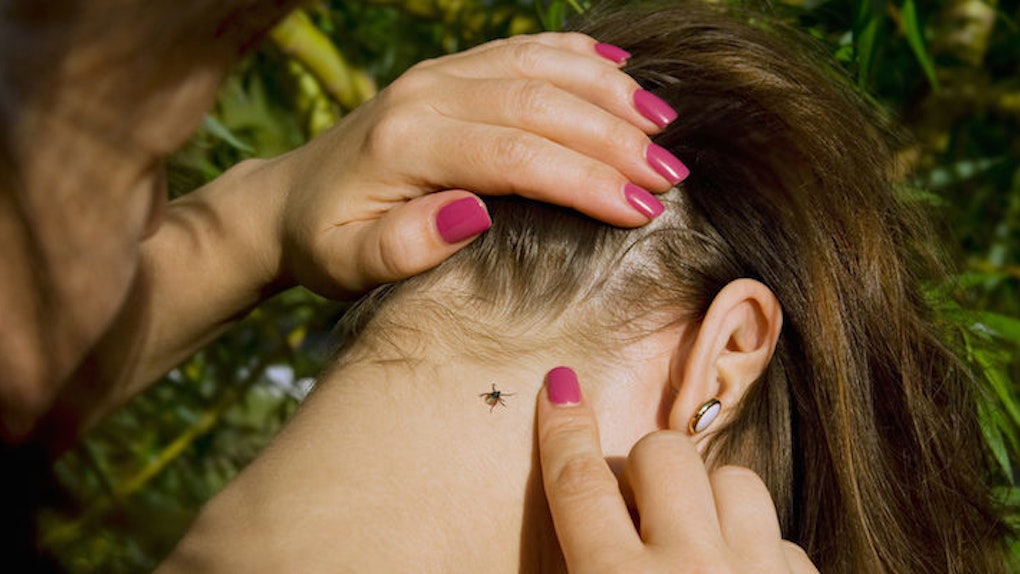 I wasn't hiking through the woods in Upstate New York when an infected tick bit me. I was in a family member's backyard in a suburb in Tennessee just a block from an elementary school.

Ticks are inflicting illness on Americans at a larger rate per year than breast cancer.

Some are the size of poppy seeds making them too small to notice. And by the time you start to feel symptoms, Lyme disease has already invaded your body and become harder to treat. It is the fastest growing vector-borne, infectious disease in the country. It is not rare, nor is it limited to outdoorsy New Englanders. It has been reported in all 50 states.

It's possible to have debilitating Lyme disease with a false negative test and a non-existent rash that is the result of a tick you never saw. This May is Lyme disease awareness month, and it's time you made yourself aware.

1. The bacteria responsible for Lyme disease is scary.

Borrelia burgdorferi is the corkscrew-shaped bacterium known to cause Lyme disease. It's smart, sneaky and elusive. Borrelia has the ability to move through body tissue and hide by altering its form. By the time your immune system has developed an attack against it, Borrelia has changed. It can even form biofilms that allow it to stay dormant until it senses a weakness in the host, such as the flu or even exhaustion.

This is why treating Lyme disease is so difficult and complicated.

Borrelia burgdorferi is not the only bacterium causing trouble. Educate yourself on the numerous tickborne diseases and the co-infections that must be treated alongside Lyme by visiting the Columbia University Lyme Research Center's website.

2. There is no reliable test.

Lyme disease is a clinical diagnosis. Read that line one more time. It is diagnosed based on symptoms, not a blood test. That is because Lyme disease tests are unreliable.

Your doctor will probably start with an ELISA blood test — a simple negative or positive blood test that has been reported by the International Lyme and Associated Disease Society (or ILADS) to miss 35 percent of proven Lyme disease cultures, with only 65 percent sensitivity.

The few options available for more detailed Lyme testing are expensive, dependent on a variety of immune response factors and, like ELISA, cannot provide a truly reliable result.

According to ILADS, less than 50 percent of Lyme patients recall a rash. For years, doctors relied on the appearance of a bull's-eye rash to diagnose Lyme disease. But what if that rash was on your scalp, back or the bottom of your foot and you never saw it? It doesn't itch. It doesn't hurt.

The truth is that you may not get a rash, and, if you do, it may not be in the shape of a bull's-eye. Mine wasn't. I went to the doctor after having a small, odd-shaped rash on my neck for a week. He told me it was a spider bite and sent me home with some cream. He was wrong.

4. Consider your choice of a healthcare professional.

Doctors are human. They make mistakes. After all, the Borrelia burgdorferi discovery is fairly recent.

One of the first doctors I visited told me that Lyme disease doesn't exist in Tennessee so I couldn't possibly have it. As if ticks wander to the state line then turn around and go home?

If your hometown doctor has been practicing 40 years in a state where “Lyme doesn't exist,” chances are he is not well-educated on the topic.

But there are great doctors available to you who have devoted their lives to finding a cure. Lyme Literate Medical Doctors, aka LLMDs, can be found by contacting the people at ILADS. It made all the difference for me. It can do the same for you.

If you know a tick has bitten you, it is vital that you get the proper treatment immediately. The treatment of Lyme is controversial, but this is something in many doctors agree.

The benefits of antibiotics in this case far outweigh the side effects. Put simply, 30 days of Doxycycline at the time of a tick bite may be the difference in living life and fighting for it.

Lyme disease is not easy to diagnose. It's even harder to treat. It may take months or even years to feel like you've found the right combination of medication and supplements. Then your insurance won't pay for it. It is controversial and political. It will rob you of your body and challenge your sanity. But most of all, it will make you feel very sick.

Be proactive. Wear white clothing if you go hiking. Tuck your pants into your socks or wear knee socks. Wear a hat. Generously use insect repellant with DEET.

You must make it a forefront in your mind to prevent tick bites. You must prevent it with the same effort you put into your common preventive measures, like wearing your seat belt or brushing your teeth. You're smart enough to know the consequences.

Lyme disease just might be as close as your backyard. You should be aware.