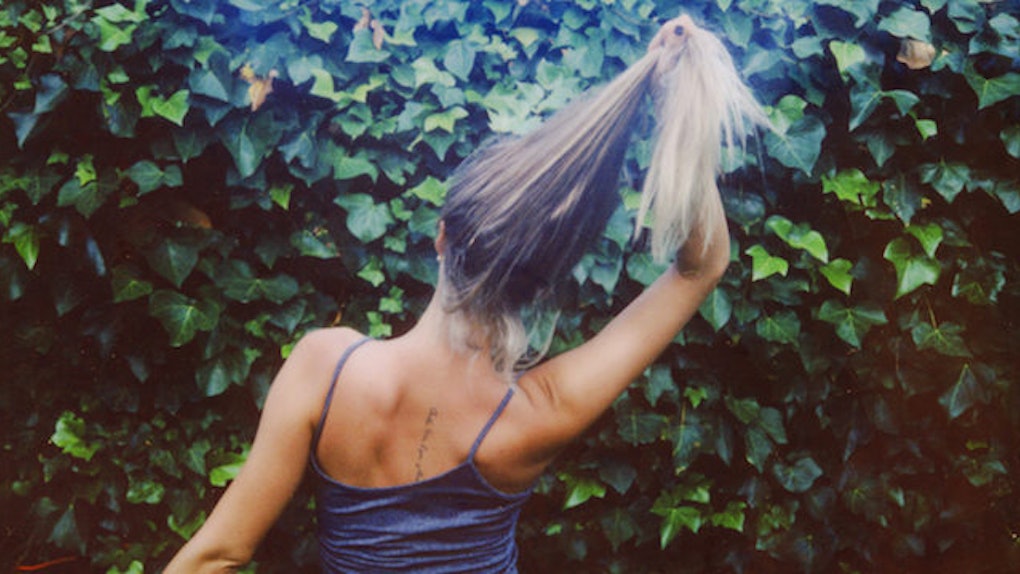 I'm pulling and I can't stop.

Trichotillomania is endlessly maddening because I can't explain it to myself or to anyone else.

I'm a logical, reasonable person and it makes no sense to me. Why would I continue to consciously do something that makes me miserable? Why can't I stop myself from a simple, stupid, repetitive action that means I will cringe at any mirror I pass for the next month or two?

I've read books. I've read research. The information is gradually getting better and more extensive, but I still don't understand what this awful demon is inside me that compels me to disfigure my face this way.

It's obvious that my anxiety affects my disorder, sometimes disastrously. It's also quite apparent to me that depression and low self-esteem are direct results.

I fight it and I try to calm myself and I refuse to resign to a life in which I will always lack eyebrows and eyelashes. I'm insulted when people suggest I get eyebrow or eyeliner tattoos. To me, that's akin to giving up on myself.

Maybe I hate the idea so much because it would force me to admit to the world that I've been giving up on myself over and over for years.

I've never believed I could beat this.

I've never really believed that I could beat this. Every time I've had a period of time when I stopped pulling out of the blue – for reasons still unknown – I have felt happy, but with a looming sense of dread.

I know the other shoe will drop. I know I'll start pulling again at some point and won't be able to stop and I'll end up disappointed in myself all over again.

This has been my narrative for so many years that I'm at a loss for how to change it. I've grown and blossomed in many ways lately, but that is one area where positive development still manages to elude me.

I stopped this past year for over seven months, and it was beautiful. It had been several years since my last long period of abstinence. As usual, I don't really know why I was able to stop. I just did. For a while.

A full set of lashes grew in, and I was able to wear mascara and forgo my ever-present eyeliner for a good few months. I loved it. I loved going virtually makeup-free and not worrying about how I looked.

No matter what, I never grew too smug or excited, because I knew I would fuck up. It's been the pattern for years. Why would it change? I don't honestly believe that I'm capable of stopping indefinitely. I enjoyed my eyelashes while they lasted, because I knew it wouldn't be long.

I've been back in the hardcore pulling zone for several months again now. I try to encourage myself with goals and memories of my happy trichotillomania-free days.

I try to consciously stop myself or get up and do something else when I start pulling. Nothing works. I know exactly what I'm doing and how horrible it makes me feel, and I do it anyway.

I must be some horrible kind of masochist.

I must be some horrible kind of masochist.

I hate myself for doing this. Then I hate myself for caring so much. It doesn't matter in the grand scheme of things whether I have a beautiful, lush, thick set of eyelashes and eyebrows or not … but it sure does matter to me.

I guess I'm more vain than I like to admit. I'm tired of feeling bad about myself, but apparently not tired enough to actually solve the problem.

I know – I shouldn't be so hard on myself. It's a compulsive disorder. It's not something I can help. I've been doing this for years and years, but I still can't quite accept that it's a part of who I am. I tell myself that I accept it, and yes, I've come a long way. Still, I know that internally I fight against it being a piece of my puzzle.

I have to accept it wholeheartedly and practically. I think that only then can I begin to make real strides to combat it. I'm not sure how to get there, but that's what has to be done.

Nothing else has worked for very long thus far. I want to be able to feel comfortable going camping or sleeping in the same house as someone else without worrying about my makeup coming off or needing to bring it along everywhere.

I'm tired of feeling ugly and avoiding making eye contact with people, as if somehow that keeps them from seeing my affliction. I'm tired of wearing a mask everywhere I go.

I have made some strides in the last couple of years as far as my confidence is concerned, but I have a long way to go. I long for those few precious periods of time when I could walk around in public makeup-free with sad nostalgia.

I tell myself that I'll get there again, only to end up pulling a day or two later. I'm in this rut of resentful resignation and I feel like nothing will ever change. I have all the power and absolutely none at the same time.

I have two choices. I can accept that I'm never going to look the way I want and deal with it, or I can commit to the exceptionally difficult and daunting work of changing a compulsion I've dealt with for the past 27 years.

That's a long time. Reforming my behavior will probably be the hardest task I've ever taken on in my life. Committing to the change will be even more frustrating.

On the other hand, it can't be worse than the anxiety and depression I've felt for almost three decades now. Perhaps if I put it in perspective that way, I can finally adopt the behavior modifications I need.