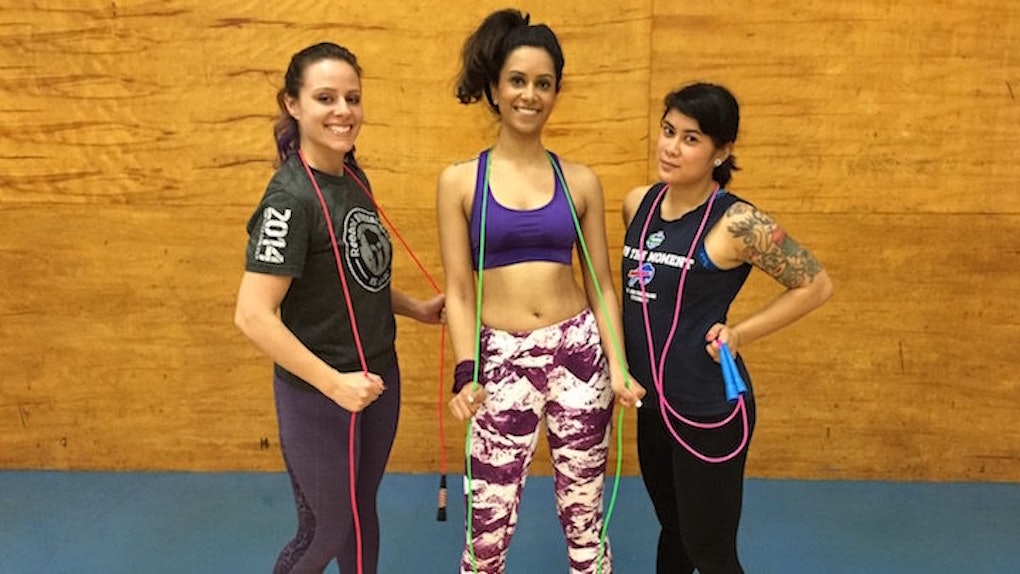 Niche exercise classes make you work out the hardest you've ever worked. Yes, working out on my own is always a cathartic experience and a fulfilling release. But I always feel super accomplished after I take an exercise class, because I know that everyone else has probably taken the class for a while.

I've tried almost everything. Zumba? Check. Trampoline class? Yep. Sign me up for anything -- I love a good challenge.

I've always loved jump roping. Like jumping on the trampoline, it's an activity that brings me back to the big-ass backyard of my childhood. So I figured I'd give Punk Rope -- a class where you jump rope to a punk rock soundtrack -- a try.

Also, I really wanted to channel the Ramones's “Sheena Is A Punk Rocker” by being Sheena the Punk ROPER. (Hehe. No? OK.)

I went to the YMCA in my neighborhood, where Tim Haft, the founder of Punk Rope, and Shana Brady, the director of training, were both waiting by the entrance. Their ear-to-ear smiles and enthusiasm spoke volumes about what a high-energy class this would be.

Tim asked me if I knew how to jump rope. I told him that sure, I did some jump rope in my day, but I was by no means a pro. He reassured me there was nothing to worry about. Then he showed me the basics of jump roping, which included keeping my elbows as close to my sides as possible and using only my wrists to turn the rope. This would help me get a great leg and arm workout.

Sizing the rope is also important. You have to make sure that when you stand on the middle of the rope, the handles come up to about your shoulder; otherwise, the rope is too long, and you could trip.

Tim and Shana structure each class with fun themes surrounding real-life events. “Tax Day” was the theme of this class since, you know, April 15 is Tax Day. We got started with an easy warm-up, which included just regular jump roping. But that quickly turned into jumping by balancing on one foot, and then jumping twice while the rope was in the air. Jumping just once while the rope was mid-air was hard enough, so I looked silly AF trying two. That was something I could probably work up to after doing this for a few more weeks.

Sometimes Tim and Shana even get special guests to play live music while people jump rope -- like this woman, who was there when I was. She was a badass at violin and helped motivate us all.

For the most part, though, the music was classic punk rock. I've never jumped rope to punk rock before (I don't really associate jump roping with ~hardcore~ music), but I will say its intensity really helped move me along. It all felt very '80s.

We started to do conditioning drills -- crawling in and out of planks, high knees and lunges. It was nice to have those in the routine because they were breaks from the cardio. They weren't exactly the most relaxing of breaks, but they were breaks nonetheless. If we wanted to take real breaks, we had the option of putting the rope in one hand and criss-crossing it back and forth on the ground to keep our heart rates up.

Because the class's theme was Tax Day, we were given fun little challenges, like trying to make dollar signs while jumping. Man, that involved a whole lot of multitasking (something I'm not very good at) because you had to look where you were going AND consistently jump an inch off the ground. But moving while jumping is a better workout than jumping in place, so I was determined.

We were then instructed to get into teams and sprint to the middle of the room, where we stomped on W-2 forms and then tagged our teammates so they could do the same.  It was a cute idea. Sprinting is probably my least favorite thing to do, but this was probably the most fun way there is to do it.

Punk rope was all about incorporating team games, and it kind of made me feel like I was in middle school gym class again. I can't stress enough how motivating it is to work out around other people: They lift you up when all you want to do is give up.

Here's me and my teammates (and new friends), Jaclyn and Kimmie. We crushed it:

Straight cardio was the name of the game until the last fifteen minutes of class, when we did a bit of core work. By the time we started doing it, I was beyond dead. Jump roping completely wears you out (you try jumping up and down for nearly an hour!).

Looking around the room, I realized that I was definitely one of the slower ones in the group. Some of these people -- who were mostly veterans, including Kimmie (on the right) -- were even faster than the music. The way Kimmie's feet moved was a skill only people with major hand-eye coordination have. Folks, as a gym rat, I'm telling you that she's living proof that there is such a thing as being a pro jump-roper.

So I made it out of punk rope class alive. And for all my hard work, I got this nifty little pin.

I would definitely go to this class again. Cardio is never fun (seriously, never), and it's always nice to try out different cardio classes to see which one is fun enough to become part of your routine.

That being said, I'd recommend Punk Rope for anyone looking to lose weight. This class can torch up to 600 calories, which is WAY easier to burn with a jump rope than a treadmill.