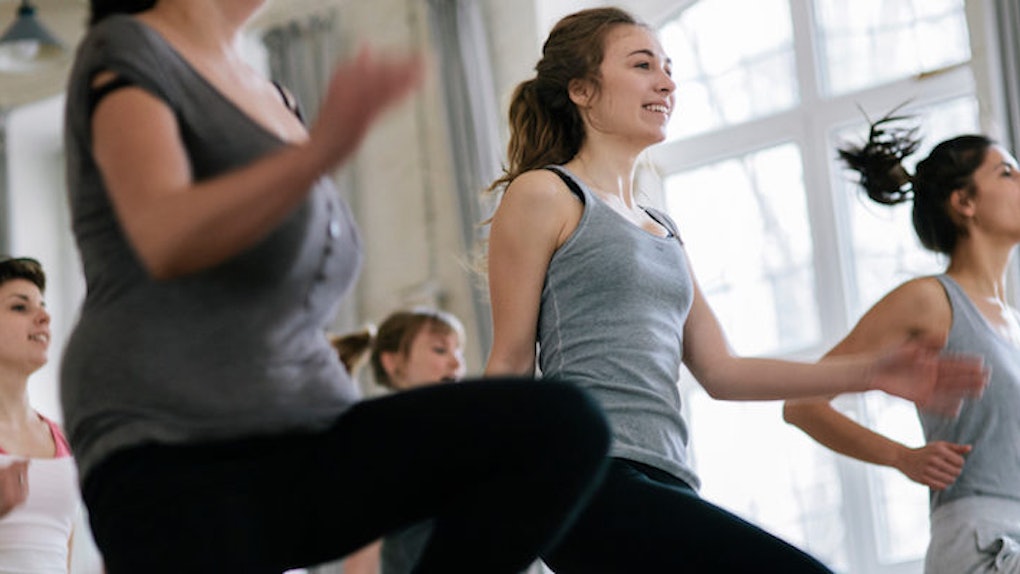 This Fitness Challenge Actually Works, So You Can Start 2017 Strong

In 2017, however, that's all going to change. If something is broke, you GOTTA fix it, so we're taking a new approach to healthier eating, smarter (and more fun) exercising and cleaner living.

We've made a pact to ditch fad diets and less-than-thrilling sweat sessions and commit to something new and more effective: Elite Daily staffers are banding together over the next two months for a #STRONGer2017 challenge — and we're recruiting you to join us. (It's all about strength in numbers!)

So, what does this #STRONGer2017 challenge entail? Well, it's all about living a healthier lifestyle, building strength over time, exercising smarter and actually having fun while doing it. The workout that sits (or maybe runs) at the heart of this challenge is STRONG by Zumba.

Let's just get this out of the way: STRONG by Zumba is nothing like the Zumba classes you might have taken in the past. It's a brand new high-intensity interval training (HIIT) program that uses only your body weight to provide a full cardio and strength-training session. Apart from helping you drop weight and tone body parts like your glutes and abs, HIIT workouts "burn more calories than traditional workouts, especially after the workout," according to the American College of Sports Medicine. In other words: They deliver better results.

STRONG by Zumba is also reverse-engineered to music mixed by producers like Timbaland, which means that every lunge, burpee and squat is synchronized to original music that was literally created to push you further. (We'll take a deep dive later this month into research that shows music has a substantial impact on athletic performance.) If you've ever found yourself stuck in an exercise class with terrible music — I once had the misfortune of taking a spin class whose soundtrack consisted entirely of remixed versions of Scottish bagpipe songs — then you know how hugely important good workout music is.

And here's where you come in. Working out, eating healthier, living better — we want you to do all of this with us. Remember that strength in numbers thing? Yeah, we weren't kidding around.

Join us in making 2017 the year we ACTUALLY achieve our fitness goals (without having to die a little inside every day). We'll be here along the way, sharing our goals and progress and offering tips and tricks from diet and exercise experts. It's time to kickstart your year with this two-month program that's specifically designed for busy Millennials.

Here's a simple breakdown of our #STRONGer2017 resolutions. Check them out, make a commitment to stick with it and join Elite Daily as we start this year off on the right foot. (Plus, after 2016, things can only get better, amiright?)

Commit to not flaking.

Let's face it: You could do the most intense, muscle-crushing, sweat-dripping workout on the planet, but if you only do it once a month, you're not going to see a difference in your fitness level.

Since results only start to show when you commit to regular exercise sessions, we're setting a goal of two to three STRONG By Zumba classes per week in January; in February, we'll ramp that number up to at least three weekly classes. We'll also devote one additional day per week to a cross-training class like yoga or spin.

Whatever it takes, we're committing to *staying committed* throughout this challenge.

Don't do it alone.

Exercising by yourself is just sad, plain and simple. There's no one to commiserate with after that tenth push-up or to laugh with when you trip over yourself mid-routine.

But working out with a friend — or better yet, friends! — gives you a dose of much-needed accountability: It's 100 times harder to flake on a workout when your BFF is stalking you with those non-stop “Where TF are you?!” texts.

So, whether it's your co-worker, your significant other or a random passerby on the street, recruit a challenge-buddy to sweat alongside you on your journey to fitness nirvana.

This one's major. Even though we'll obviously be killing our workout game throughout this challenge, that doesn't entitle us to start eating like trash. Since we know that working out isn't as effective if it isn't coupled with a mindful diet, we're committing to eating better — a topic we'll explore in-depth during the month of February.

But before you go into full-on panic mode and purge your kitchen of all things delicious, hear this: A healthy diet doesn't have to mean an extreme one. Cheat days are a-okay in our book — just as long as you don't let them get the best of you.

Just like fitness isn't only about looking hot in spandex, overall health encompasses way more than just eating clean and sticking to your workout routine. It's easy to forget about all those other elements — those elusive x-factors that majorly affect how your body performs day-to-day.

Seemingly minor slip-ups like skimping on sleep, not drinking enough water and indulging in the occasional midnight cigarette can actually have a huge, not-so-good influence on your long-term health.

That's why, throughout the STRONG By Zumba challenge, we're taking a holistic view of well-being. Translation: We're vowing to be better about the little stuff, and nix toxic habits once and for all.

There's no better time than now to set yourself up for a #STRONGer2017. Find a STRONG by Zumba class near you and join Elite Daily as we get healthier and stronger together.