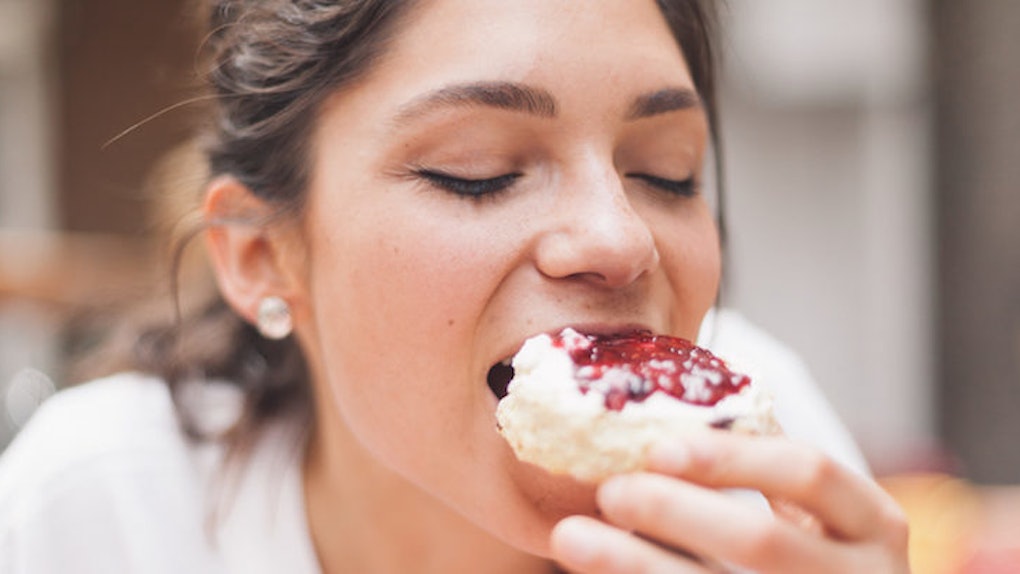 In Defense Of Dessert: Why 'Guilt-Free' Has No Place In Holiday Treats

Enough is enough with the sugar-free, gluten-free, dairy-free and guilt-free.

A quick scroll down Pinterest in the “dessert” tag yields an array of recipes trying their hardest not to be desserts.

Although they have chocolate drizzled on top, or they are baked using a cookie sheet, these "desserts" hardly qualify as the delicious, decadent treat a real dessert should be.

I don’t want to see 27 ways I can use avocado for dessert.

Avocado, while delicious in its own right, should not maneuver its way into the realm of sweets.

I want a chocolate cookie, not one baked with zucchini.

The health craze, fueled by magazines and celebrity culture, has left everyday people feeling guilty each time they pick up something over 100 calories.

Now, that isn’t to say people should overeat.

Physical health is important, and monitoring your daily intake of calories is key, as is keeping a (mostly) well-balanced diet.

Sometimes, you just need an extra scoop of ice cream, a second cookie or a milkshake, and often it’s to help numb the pain from a bad day.

“Healthy desserts," an oxymoron, try to reduce the guilt you feel looking at a crumb-filled plate or your bloated stomach in the mirror.

Instead of striking a balance between pleasure and health, they only create guilt and frustration.

These "skinny," "guilt-free" recipes are waging a war against the typical decadent, unhealthy recipes, and I refuse to let them win.

Their intentions are bad.

The very notion of something being "guilt free" implies there should be guilt to begin with.

Eating something sweet is a treat, and it deserves to be enjoyed fully.

The shameful rhetoric used in these alternate recipes only makes people unnecessarily self-conscious.

There’s no need to punish yourself for going the decadent route instead of the low-cal, sugar-free one.

More importantly, dessert is for people who live to eat, and there's no shame in it.

It’s a treat, and treats shouldn’t have qualifications.

Whether you’re celebrating or emotionally eating, you need a real dessert, not a low-calorie stand-in.

Restricting yourself to the healthy version removes the pleasure from the situation, which makes the whole act of eating it worthless.

If you’re going to eat dessert, eat a real one.

You’re already going out and eating more than you need for the day, so why not embrace it?

With the holidays coming up, the fight for real dessert becomes increasingly relevant.

It's true people tend to overeat when the holidays roll around, but sweets after a holiday meal are social meals.

By skipping out entirely, you'll miss out on bonding, and you'll likely offend a distant relative who toiled over the pie you’re passing up.

If you bring an avocado-filled pseudo-dessert, you’re offending other people who mean business when they’re told to bake a treat.

If you have to go to war with dessert, don’t challenge the entire notion of it.

Instead, attack the plethora of packaged mixes or pre-made, artificially colored and flavored individual cakes and cookies consuming every grocery store nationwide.

Although a homemade cake may still be unhealthy, you at least get some control and can avoid ingredients you can’t pronounce.

If you're hell-bent on making dessert healthier, bake it at home instead of buying out, but don’t force an avocado into a brownie and then label it guilt-free.

Dessert is never going to be healthy, no matter how many ingredients you cut or substitute.

You may as well just go all out.

There is never going to be a health benefit from dessert.

The real benefit — and the reason it has become a staple of the modern diet — is because it makes people feel happy.

Guilt-free, skinny recipes try to destroy the escape biting into a cookie gives you, leaving nobody satisfied.

Dessert should stay a treat, so ignore the guilt and pile the plate high.