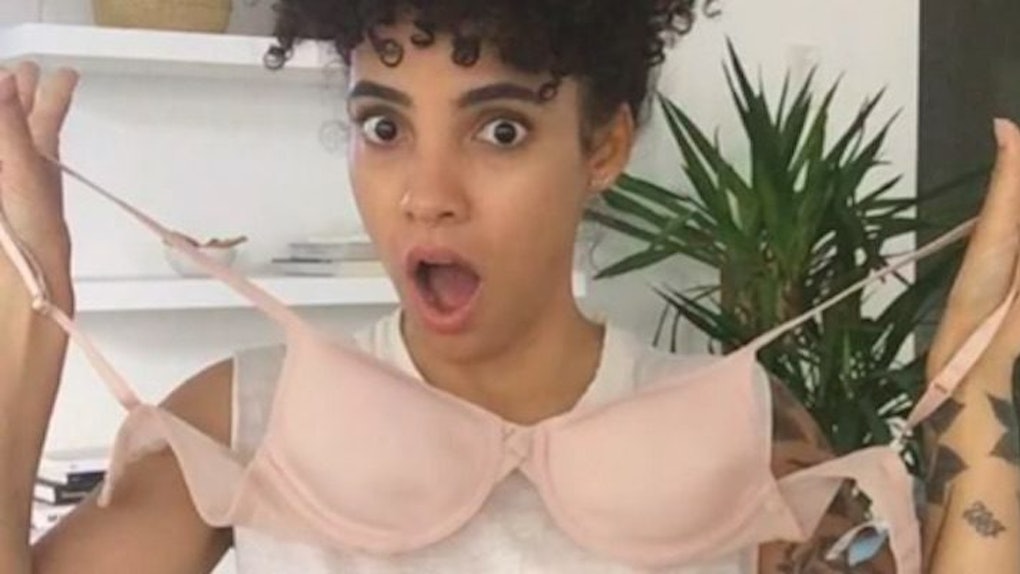 Some people really let their Insta-fame go straight to their heads.

One minute, you're just a normal person with a cool Instagram. The next, you hit 50,000 followers and you're suddenly a self-appointed personal trainer, nutritionist or, in this case, an oncologist.

Yep, Nikisha Brunson, a social media influencer and co-creator of the skincare brand Urban Bush Babes, is feeling the heat after she used her massive reach to spread a message about the risks of wearing bras. The post totally backfired.

Brunson published a video in which she warned ladies that wearing bras can cause breast cancer.

She preached that it's best to let your lady bits live freely because "bouncing bosoms help clear the lymphatics."

During the short clip, Brunson told her followers that bras make your "lymph valves and vessels close."

Which then affects your body's ability to flush toxins from the breasts and drain the lymphs.

The video has since been viewed over one million times, and some people are pretty pissed.

They're saying Brunson is filling her followers' heads with frivolous medical advice. And they're not far off.

Many of you understandably can't believe this is true. Seriously. 1m views for the video on this. Disgraceful. pic.twitter.com/UeciaKf0Hl — Sali Hughes (@salihughes) September 13, 2016

A lot of people feel it was extremely irresponsible for Brunson to use her influence to spread misleading information about breast cancer.

Some outraged Twitter users have criticized Brunson for preaching incorrect information during her video.

As if self appointed dietitians weren't bad enough. Now we have YouTubers as oncologists, talking about "contracting" breastcancer from bras — Sali Hughes (@salihughes) September 13, 2016

Others have called the influencer out for spreading claims supported by a bogus study.

The study was conducted by Soma and Syd Singer, and it is widely believed to have no scientific merit.

In the caption, she said the study concluded that "three out of four women who wore their bras to sleep contracted breast cancer."

She also wrote, "one out of seven women strapped into a bra more than 12 hours a day" also developed the disease.

She goes on to say that "bra-free women have just a one in 168 chance of being diagnosed with breast cancer."

She even claims that bra companies and cancer research organizations are keeping these statistics on the down low.

If you're really worried about breast cancer, you should probably stop listening to clueless internet bloggers and follow the advice of medical experts.

Yes, we're looking at you, Brunson.

Citations: People are calling out this 'wellness influencer' for claiming that wearing a bra causes breast cancer (Metro UK)