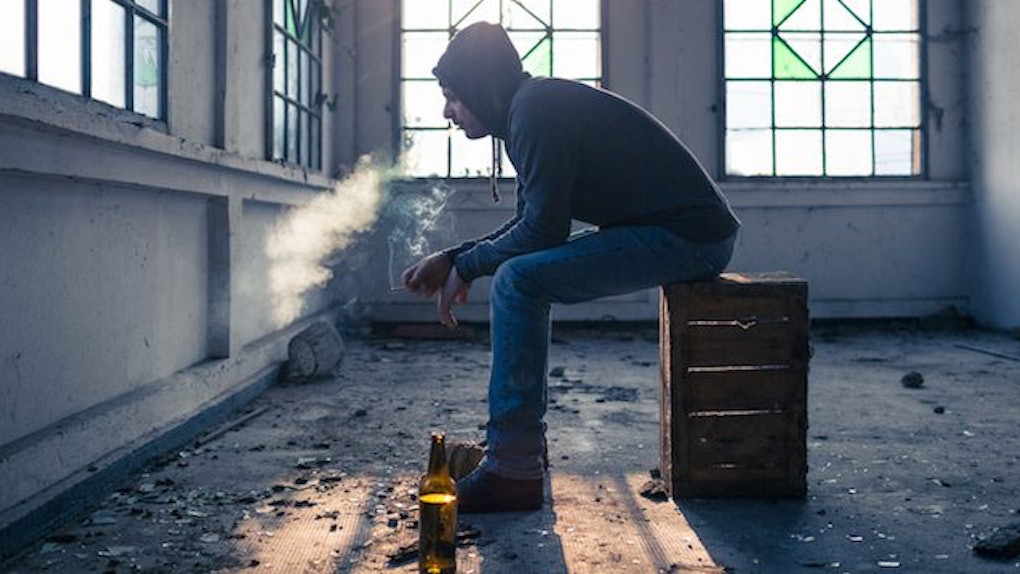 Being In Love With My Therapist May Have Saved My Life

This article is second in a series of four autobiographical essays detailing one man's struggle with alcoholism and his recovery.

Loneliness and depression in my late-teens and early 20s led me into an addictive lifestyle. An awkward teen and young adult, I desperately craved connection.

By my mid-20s, addiction had reduced me to shreds.

In the days leading up to my first stint in rehab, I stood outside in the rain in New York City with a 40-pound duffle bag over my shoulder, homeless.

The first day, I experienced having no money and nowhere to go, and a panhandler stopped me as I hiked down Broadway on the Upper West Side.

He paused in his tracks, a puzzled look on his face, and said, “Really, man? Sorry to hear that.”

I called friends and acquaintances, desperately looking for a place to crash, and finally I found a recent former roommate who took me in while I figured out a way back home, to the Midwest.

Not long after that, I admitted myself to a treatment program for alcoholism.

Suddenly, I was lavished with attention I'd been severely lacking. They swept me into a structure of camaraderie and intimacy. It felt good.

That's when I met a young woman physician who was there working through part of her psychiatry residency training.

She was quiet, demure and keenly observant.

She was attentive and deferent to her attending physicians. In the fierce hierarchy of medicine, those traits make one a "gold-star" student.

Occasionally, in group sessions, she flashed from her quiet student persona to call someone out on their bullshit.

Anyone and everyone in their earliest stages of an addiction treatment group are by default, full-of-it. Just ask anyone who has been in recovery.

For example, when a guy whose partner who had reported finding him passed out in a chair with a half-empty bottle nearby, every single day after work, tried to say he was, “not in denial,” I could sense it ruffled this young doc's feathers.

"Really?" she'd ask, and then she's challenge the patient to take a little harder look at himself.

It would accompany a brief look that was like getting hit by a blowdart dipped in Tabasco sauce. (I was on the receiving end of this a time or two, perhaps.)

Those fleeting moments of seeing bits of her true colors, coupled with her seeming black belt-level self-discipline, on some level, attracted me instantly.

Is it possible to get "intellectually aroused," and might that have been one of the unmet needs that was driving me to drink so much for so long?

The offices in the resident psychiatry clinic were very small, grey and bare. There was never anything personal on the desks or on the walls because the residents had to share the space.

Picture visiting your teaching assistant for help on a paper — that sort of minimalist vibe, not the wood panels, leather couches — and Tiffany lamps you see in the movies.

“You start,” she'd say. Total ambiguity kicked off each session.

Sometimes I'd shift uneasily, leaning one elbow on the desk and avoid eye contact for a minute before my first utterance.

Once, I even said, “Umm, well, to tell you the truth, I've been drinking on and off since I saw you last."

Sometimes when the conversation headed down that path, the one of my ongoing struggle to achieve sobriety, I'd try to evade her.

Naturally, the truth was uncomfortable.

“So, have you seen that episode of 'Dr. House' where the patient becomes spontaneously drunk without having drank?” I asked. “The one where they discovered the pizza he had eaten had a type of yeast that started spontaneously fermenting in his stomach?”

She rolled her eyes slightly and smiled for a few seconds.

“Yeah,” she said. “I think I heard a couple of the other residents were talking about that one once.”

That flash of geek kinship and the friendly moment would always end quickly, as she'd nudge the conversation back into professional therapy mode.

At the time, I had no other real friends nearby and definitely no girlfriend.

I was lonely, and those fleeting moments of personal connection with my doc were so powerful that at times, they provided enough motivation for me to forcibly stop drinking for a few days, just so I wouldn't miss my appointment with her.

Later in the three years she saw me, I gave her a handwritten card expressing some general affinity and "thanks" for her ongoing help.

By then, I began to have a glimmer of insight that giving her something that could be construed as a gift — even just a handwritten card — might be crossing some sort of boundary.

I was confident there was mutual understanding, though never explicitly stated, that I liked to see her and that on some level, she liked to see me.

I was more than just a number.

And I didn't want to lose her.

Though I'll never know for sure, my guess is, the topic of boundaries arose with her supervising physician at least once during those three years.

It's a sensitive, still taboo topic in psychotherapy.

So partly driven by guilt and partly by fear, I brought it up in a session, using the card as the pretext for the conversation.

I asked if giving her the card was crossing any lines, and I was pre-apologetic if it was.

She explained that she receives little things from patients all the time. She reminded me it'd be her job to tell me if something in the context of my treatment crossed a boundary, ethical or otherwise.

Eventually, we would have to discontinue our visits, as she had accepted a fellowship in child psychiatry.

Months before that, we began to discuss my fears of letting go of her and moving on to a new provider.

“A man or a woman?” she asked in one of the last sessions, rapidly clicking through profiles of other doctors in the area.

“Do you prefer a male or a female provider?” she clarified.

I think she might have been testing to see if I had any insight about my tendency to become anxiously attached, especially to women.

“Uh, I guess I have no preference,” I said, not knowing what to say.

Discussing the transition of care was a reality check I'd no longer have her in my life.

In one of those sessions, toward the end, I admitted I had cried a few nights prior and took a sedative I wasn't supposed to have.

In a sense, she was providing grief counseling for the loss of herself out of my life. With gentle tact and care, she guided me toward acceptance that there would have to be total closure.

My doc did find me another psychiatrist, a male resident native to Switzerland who ended up being an excellent fit.

And I continued visits with him for yet another three years. During that time, I was able to get more honest with both myself and him.

Total closure from the tender relationship, or “therapeutic alliance” as she coined it, with my first long-term therapist took years.

But all love comes with eventual pain, and looking back, I would not have had my treatment play out any other way.

She was who I needed at the time, and I don't think I could have done it without her.