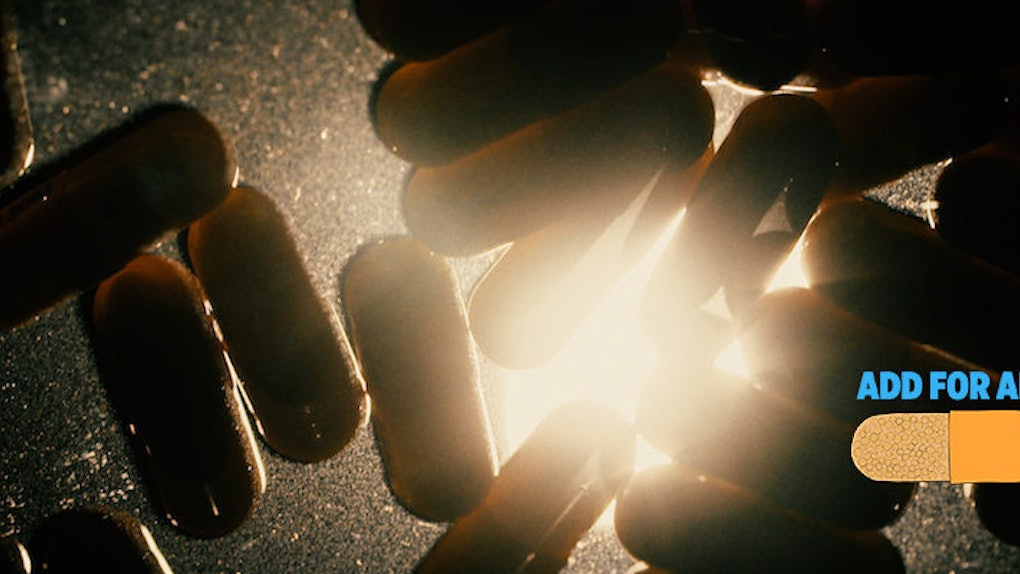 How Adderall Became Overprescribed And Underestimated

It's the focus during dead week when you're overwhelmed by exams.

It's the pick-me-up at a pregame so you can last all night long.

It's the daily dose to get you back to feeling "normal."

It's the addiction that will consume you whole.

People take Adderall for a variety of reasons, and, like any drug, it affects everyone differently; however, with the power of this Schedule II controlled substance, the effects can be life changing.

Adderall is an amphetamine used to treat attention deficit/hyperactivity disorder. The three characteristics associated with ADD/ADHD are inattentiveness, impulsiveness and hyperactivity. For someone who shows these symptoms, Adderall can be extremely helpful in regaining focus and clarity.

The prescription process still has quite a ways to go in established diagnostic procedures, particularly in how physicians renew prescriptions and how much time is spent with patients to monitor side effects accurately.

The first thing that came up when I Googled "Adderall test" was "Adderall Tips: How To Convince Your Shrink You Have ADD/ADHD." The article begins with the ACHD logo altered to say ADHD.

It's the public's desensitization to this amphetamine that gives it the most power.

Adderall is so normalized, I feel like a square if I warn anyone about its harmful effects. But after meeting some of people within the documentary, I can't help but vocalize my stance on abusing prescription pills.

There is currently no known, definitive cause of ADD/ADHD. There is no standardized clinical test to diagnose.

The most common means of diagnosis is a basic symptoms checklists; it contains questions like, "Do you get distracted easily?" or "Is it hard for you to concentrate on one task?"

With no universal diagnosis procedure, it's not surprising a study found that 93 percent of people could acquire Adderall prescriptions by faking symptoms.

So what's the solution?

Dr. Zarfati sums up the effect of Adderall perfectly in this piece:

If you do suffer with a condition like ADD, you know it can really change your whole life. Just everything, your relationships, your work, your school. And if you do seek treatment and you get the right treatment, I mean, it could change everything.

When Adderall is prescribed and used effectively

Meet my friend Alex Malecki, 29, who has a positive story to tell about his journey with Adderall.

He is prescribed, and has been taking it for over 10 years. As an operations manager for a top 25 consulting firm in New York City, Alex largely attributes his success to Adderall:

I wouldn't be where I am today if it wasn't for it. Imagine having terrible vision and trying to get through high school, college and everyday life without glasses or contacts.

Alex was diagnosed in the second grade; he doesn't really remember feeling different or like he had any kind of "disability."

He started off with Ritalin, which stunted his growth a bit; although, he now stands at over 6-feet tall and jokes he doesn't have much to complain about.

In high school, he switched to Concerta. Before Concerta, Alex was regarded as a very upbeat, outgoing and overall positive person by everyone he knew. After about year on Concerta, however, his personality took a drastic shift in the other direction.

I was depressed, had thoughts and plans about how to kill myself and my grades and social life took a steep decline. My parents and psychologist saw this and realized that I should try a different medication.

This led Alex to Adderall at the age of 15. While on Adderall, his grades soared; he joined several extracurricular activities, holding seven leadership positions; and he experienced an overall positive shift in his mood and social life.

Though I did stop taking it for a while, I do see how much it improved my life. I was able to excel in college and jobs after graduation because of my improved focus.

It's important to Alex that he doesn't become dependent on his medication. He only takes it for his full-time job, and he can definitely tell the difference between how he operates at work and out of work.

Outside work, in social situations, Alex's friends might make the joke, "It looks like someone didn't take their meds today." But he's fine with that. He'd rather risk not being as sharp when he isn't under the pressures of his corporate duties if it means he can maintain control.

He'd rather risk not being as sharp when he isn't under pressure... if it means he can maintain control.

What Alex hasn't been able to come to terms with is why so many other people believe they need Adderall. They're drawn to its ability to accelerate them to fit into society's standards of success.

The truth is this isn't the best path for many people.

I can tell you no one has ever asked me what my GPA was after college. Sure, I'm in a creative field, but all they wanted to know was what video/article ideas I had.

They cared about my experience in the field, not my academic ranking.

Although it's a personal choice for Alex to refrain from taking his meds on the weekend, he said it's helped him to keep his dosage on the low (10mg a day).

Alex says seeing his psychologist is just as significant to his continued success as is his medication.

My psychologist got me into the routine of creating lists to stay organized and focused, how to evaluate decisions before I do something impulsive and how to create other routines that allow me to concentrate on other priorities.

Unfortunately, for many, fighting off an Adderall dependency isn't as easy.

When symptoms are faked and the outcome is fatal

Parents Richard and Kathy Fee from Virginia Beach gained national attention in 2013 when their son, 24, took his own life while dealing with an aggressive addiction to Adderall.

Class president, straight-A student and baseball player, Richard showed no symptoms of having ADD/ADHD growing up. It wasn't until he got to college that he tried Adderall. He got the pills from someone who was prescribed but who only took the pills when they had to study.

After he graduated, moved back home and started applying to medical school, he missed the competitive edge the pills provided. And so, Richard gave all the right answers to the checklist and obtained an Adderall prescription easily.

Between two doctors, he was able to get frequent refills despite evidence of his growing addiction and a looming psychiatric breakdown.

What makes Richard's story so notable is how much it exposed the prescription pill industry. He may have manipulated the system, but every health professional failed to save him.

He was clearly abusing Adderall, and both doctors turned a blind eye and fed him more pills.

In Virginia under HIPAA, physicians are required to input medical records, but not necessarily to look them up when prescribing a patient medication.

As a result, Richard was able to receive a prescription from two different doctors; he would go through a month's dosages in a week or two and then go through severe withdrawals.

When Richard's parents become concerned with his Adderall usage, he assured them: "A doctor would not give something harmful to me."

A doctor would not give something harmful to me.

Eventually, his addiction morphed into psychosis. He would sit on the roof and talk to the moon and stars; take long, sporadic drives; cut up pieces of the map and try to explain why they could easily fit into other continents in real life.

When he'd go through withdrawals, he'd lash out at his parents, throw furniture in the pool and demand he get more medication.

Richard's parents did everything in their power to save Richard's life.

They tried to manage his pill consumption day to day, and they even went to his doctor's office to try and stop the prescription all together. Unfortunately, because he was over 18, his parents weren't able to intervene legally.

His father recalls begging the doctor to stop, saying, "If you don't stop giving my son Adderall, you're going to kill him."

If you don't stop giving my son Adderall, you're going to kill him.

The Fees have denied most media coverage over the years for the fear of being exploited; however, they graciously shared Richard's story with Elite Daily in hopes that a platform that reaches millions of millennials can make a real impact.

The dangers of using Adderall without a prescription

Richard first obtained the drug from someone at his college who was prescribed it, and this is very common.

A study Elite Daily conducted determined 63 percent of millennials first tried Adderall in college; of that sample, a whopping 88 percent did not have a prescription.

ADD and ADHD diagnoses refer to specific chemical imbalances that Adderall, when used correctly, can help to right.

If someone without ADD/ADHD takes Adderall, however, they will not feel "normal."

People who take the drug without a prescription often report feeling jittery, wired and talkative. Respondents to the Elite Daily study who have taken Adderall reported some of its more common side effects: loss of appetite (71 percent); dry mouth (54 percent); insomnia (50 percent).

On top of that, 43 percent reported feeling anxiety and 25 percent said they experienced sadness/depression. That's not normal, and it's not good.

When you take the drug without having ADD/ADHD, or when you're taking too much, the results can be monstrous.

Taking Adderall for the first time when you don't need it is like drinking a strong cup of coffee (or several) for the first time (or, maybe it's more like snorting cocaine). You feel a high you continue to chase every time you use, but the drug becomes less and less effective.

You get to the point that you just need it to function.

When you combine our bite-sized, meme-making, 140-character-limit, frenetic "ADD culture" with a society that has normalized the use of amphetamines, it's not surprising we have one big pill-popping nation on our hands.

Treatment for Adderall addiction is available. Treatment may be sought in an inpatient residential rehab center or in an outpatient program. If you need help finding treatment, call 1-877-446-9087.