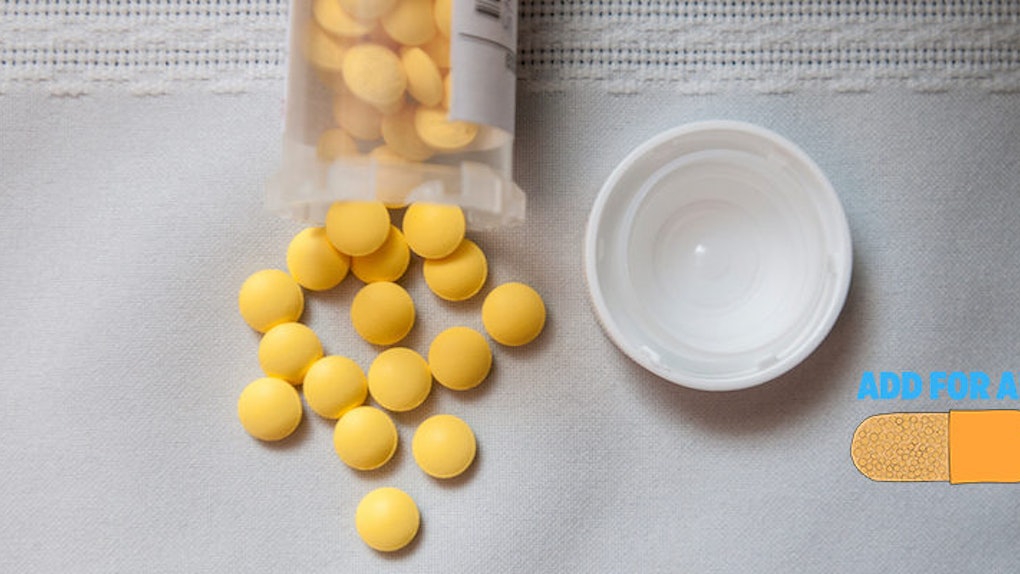 Most Millennials Use Adderall Without A Prescription Or ADD

At my college, Adderall was everywhere. You just had to know where to look.

I first encountered it the weekend before finals during my fall semester freshman year.

Like the anxious freshman I was, I had spent a week in the library speed-reading an entire semester's worth of medieval and 17th century poetry. I was fueled by double espressos (four a day, yes I know) and fear of failing.

The library was disgusting during reading period. It stank of stale Red Bull, congealed quesadillas and sweat. You often saw people brush their teeth in the bathrooms: Yes, they brought their toothbrushes because they knew they'd be sleeping there.

I was about to get another coffee when some guy I didn't know came up to me. We were near the library exit and I was zipping up my coat so I wouldn't freeze in the blizzard outside. Boston winters are the worst.

"You've been here forever. Do you need some Adderall?"

I think I gave him a curt “no thanks” and walked away feeling a bit confused.

But when I told my roommates about it that night, they said I should've said yes.

“Nah, it just makes you better. More focused. I took it for my SATs. Everyone does it.”

I've never been one to do things just because “everyone” does it.

But I did wonder if I was missing something. After all, these people all got into our Ivy League university and I did spend a lot of time procrastinating.

If I could be more focused and get through that bloody medieval poetry more quickly, that'd be ace, I thought.

No prescription, no problem.

It turns out my experience was pretty normal.

Study drugs are really common on college campuses, especially in the United States.

Where I am less typical is here: I've never taken Adderall.

According to our survey, 74 percent of people aged 18 to 34 have taken Adderall or some form of study drug. Most of them (63 percent) have never been diagnosed with ADD or ADHD.

So I guess my friends were right when they said “everyone” was using Adderall.

As a generation, we usually try Adderall for the first time in college, without a prescription (76 percent) and to help with studying (90 percent).

To be honest, it doesn't surprise me so many people take Adderall in college.

But I've always been kind of shocked that prescriptions seem irrelevant for those who don't technically “need” the drug. I mean, it's still an amphetamine.

Freshman year wasn't the only time someone offered me Adderall. It happened pretty regularly. You didn't not take Adderall because you couldn't get it: You chose not to take it.

You didn't not take Adderall because you couldn't get it: You chose not to take it.

Three percent. Even that seems high – unless they don't have access to healthcare.

Put aside how easy it is to get Adderall without a prescription in any campus library, online or from someone you know.

In college, I had friends who would Google “ADHD symptoms” and fake them at the university health service so they could get a prescription. It's not like the diagnosis is based on a blood test or a brain scan.

Usually, they got prescriptions because they were paranoid other people's Adderall wasn't real, or they wanted their own stash. Almost all of them shared their prescription with friends. Some sold the pills individually to make some cash.

Obviously, they did their best business during finals.

Is it cheating, or not?

So, SURPRISE SURPRISE, a lot of us (69 percent) have taken Adderall before a test. Most of these people (54 percent) have never been diagnosed with ADD or ADHD.

But just like it is with prescriptions, nobody cares.

Our survey found 91 percent of respondents believed taking Adderall before a test was not cheating.

Are we all in denial? Maybe.

But I guess since there's no quick, definitive way to prove you have ADD/ADHD, it's difficult for colleges to have a cheating policy on study drugs they can enforce. So they don't bother.

Not just for studying.

It wasn't long after freshman fall that I realized Adderall wasn't just for finals and essay crises.

It was 10 pm on a Friday night and I was tired. Like, really, really tired. The last thing I wanted to do was party.

When I called my friend to say I was bailing, she called me out.

Yep – the same drug that keeps you awake to study also helps you party.

According to our study, two-thirds of 18-34s who've taken Adderall without a prescription have used it for more than one reason. Studying may be the main one, but “recreation or fun” is also popular.

The most frequent combination is studying plus recreation/fun: 55 percent – yes, more than half – of people who used Adderall to study also used it for recreation/fun.

On top of this, 36 percent of those who used it to study ended up using it in their jobs or careers.

None of these people had a prescription for Adderall. Most hadn't ever been diagnosed with ADD or ADHD.

Our respondents told us about their experience using Adderall to party:

Used it to stay up at a music festival. Was exhausted the next few days. Never really took it consistently, just here and there to stay up and party. I only used it for big assignments or for a party or two. [Adderall makes you feel] soberness but you're really drunk. [I gained an] ability to drink a lot more.

Nobody wants to be the drunk, sleepy girl (or guy) at a festival, amirite?

There's no stigma. You're a stigma.

Sure, you occasionally heard stories about people getting a D on a test because they were sleep-deprived from taking too much Adderall the day before.

And there was that guy in economics class who took so much Adderall, he spent the exam coloring in the first three pages of his notebook instead of answering questions. Yes, he handed in a blank notebook with three pages of solid black at the front.

But for each of these stories, there are “success stories,” too.

I'm not just talking about people with ADD or ADHD who take prescription Adderall to function in their daily lives.

The guy I know who took Adderall most consistently throughout college graduated Phi Beta Kappa with top honors and landed a swanky job in private equity.

Could he have done it without Adderall? Maybe. But also, maybe not. Either way, he definitely didn't have ADD or ADHD.

Most people I know who took Adderall in college were focused and ambitious. They studied hard and partied hard. Most of them didn't have ADD or ADHD.

None of them flunked out or got seriously sick from Adderall, as far as I know.

So perhaps it's no surprise that even though 97 percent of people experience at least one negative side effect when they take Adderall, the vast majority (85 percent) of people aged 18-34 believe Adderall and study drugs are “not dangerous” or neutral.

Maybe, also, it's because the most common side effect is loss of appetite and that doesn't really seem all that dangerous.

Of the people we surveyed, 70 percent reported losing their appetite with Adderall.

This makes sense when you realize Adderall was originally created as a weight loss drug called “Obetrol” – which, as far as names go, sounds unappealing AF. Adderall has a better ring to it.

But it gets worse.

Of our respondents, 53 percent got a dry mouth, 49 percent had insomnia and 43 percent started grinding their teeth.

Others felt dizzy, got the shakes or experienced changes in their sex drive.

Most people (81 percent – more than four in every five) experienced two or more negative side effects.

This is the part I don't get.

Are the benefits of Adderall so great that people just live with the side effects until they get extreme?

If you had a dry mouth and insomnia, would you keep taking the thing that's causing it, knowing you'd be fine without it? I wouldn't.

It doesn't even stop there.

Some of our respondents had more intense experiences:

Other times, it spiraled:

Overdosed, had mini-heart attack, had to stop. Got addicted. Went to treatment. 2 years clean.

Elite Daily's documentary team told the story of a millennial whose Adderall use ended in tragedy:

These stories can be scary. But they show what Adderall is capable of, not what it was designed to do.

As a generation, we've grown up with Adderall or close to people who've taken it.

Adderall is easy to get. It seems safe enough. Everyone's using it. Sometimes a Red Bull doesn't cut it. Trust me, it's also bad to drink eight shots of coffee a day. No, I don't still do that.

Given all this, it isn't surprising that off-prescription and recreational use of Adderall are so “normal” for our generation.

But this isn't new. We've been hearing about Adderall in colleges since the early 2000s.

And yet, nobody takes responsibility: not the pharmaceutical companies that are profiting, not the doctors who are writing prescriptions, not the universities that turn a blind eye and not the hospitals that deal with cases that go wrong.

Or perhaps that's the point, and "ADD For All," the phrase that inspired the name “Adderall,” was the plan all along.

Source: Elite Daily's 2016 Adderall survey had 1,258 respondents. For the purposes of this article, all results have been filtered to reflect responses from men and women aged between 18 and 34 only. The sample size of this segment is 1,133.

Note: Most people our age aren't aware off-prescription Adderall and Ritalin are Schedule II illegal substances, which is the same bracket as cocaine and crystal meth. If you're caught dealing, the minimum sentence is five years in prison.