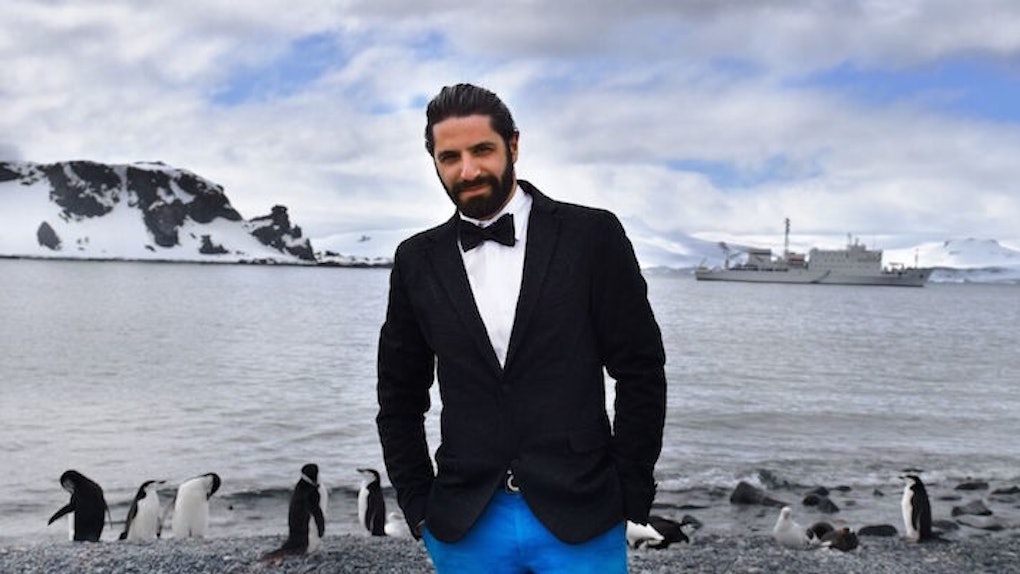 Jon Levy nearly got trampled by bulls in Spain, almost got his throat cut in Ethiopia and found himself close to falling off Bangkok's Ghost Tower, among other near fatal incidents, to find an answer to a simple yet profound question: What defines an adventure?

Levy, a behavioral scientist and author, traveled to all seven continents, visiting somewhere between 30 to 40 countries (he's lost count) to research this topic.

I am vehemently opposed to the monotony of life.

The 36-year-old behavioral scientist recently sat down with Elite Daily to discuss his findings, which he outlined in his new book, "The 2 AM Principle: Discover the Science of Adventure."

He concocted a four-step formula for how to have a true adventure.

These steps aren't just applicable to your next big vacation, but also to life in general.

Step one: Surround yourself with the right people and go somewhere new.

If you've ever traveled with a group, then you probably know one person can ruin the entire experience for everyone.

This is precisely why Levy is a huge believer in choosing the right crew for your adventure. He told Elite Daily,

The first stage is you put the right elements in place so that anything can happen. The most important by far, is the people you surround yourself with. The right group can make a terrible party awesome, but the wrong group will make the greatest experience absolutely miserable.

You also need to be willing to embrace novelty. So, go somewhere you've never been.

As Levy put it,

Our brain is designed to respond to novelty... New location actually causes you to explore and experience. It's preferable if you can go to a new location.

Research shows novelty is more likely to induce the recording of memory, which is why vacations, or travel, often lead to our most unforgettable experiences.

Reject repetitiveness -- it's the death of adventure.

Step two: Be willing to step outside of your comfort zone and take risks.

Levy realizes not everyone has the means to travel to another country, but you don't necessarily need to do this to have an adventure.

He's found a willingness to try new things and step out of your comfort zone is adventurous in and of itself and can lead to immense personal growth -- even when done on a small scale.

I believe that there's a world of wonder and adventure out there and you don't have to be rich to explore it, you don't have to have incredible contacts. I believe that the scope of our life is in direct proportion with how uncomfortable we're willing to be. If you look at all the research on personal growth, development, satisfaction -- it's when we're doing something just outside of our comfort zone or skill-set that we're most satisfied.

I believe that the scope of our life is in direct proportion with how uncomfortable we're willing to be.

This doesn't necessarily mean risking your life in the same way he has or traveling to every corner of the globe.

Rather, it's a matter of accepting a certain level of uncomfortableness:

You don't have to be traveling around the world to have an adventure... What's your tolerance for novelty and risk? There's plenty of stuff you can do that's nerve-racking that doesn't require [risking your life]… Ask somebody out, play PowerPoint karaoke…People get super nervous about these things.

Simply put, welcome the unexpected and test your limits when you can (but don't get yourself killed).

Place limitations on yourself or the group you're adventuring with; set goals.

Levy, for example, likes to travel to foreign cities by himself with no money and no prior knowledge of the place, and tries to convince a stranger to put him up for the night. If he fails, he sleeps on the street.

But, you don't necessarily need to go to such extreme lengths.

Levy is sensitive to the fact that being a certain race or gender can make traveling to certain places and pursuing certain activities highly impractical -- and even dangerous.

Yes, he urges people to take risks and challenge themselves but within reason. He explained,

You can begin small. …You don't have to do the crazy stuff if it's not you. But it is about getting outside of your comfort zone.

This could be as simple as limiting yourself to $5 on a night out.

Doing so would force you to talk to more people and interact with your environment more (would also save you money and make you more likely to remember the night).

Setting limits on yourself helps you be more creative, which makes you more spontaneous, intrepid and adventurous in the future.

Step four: Know when to stop.

This idea of pushing yourself but also setting limits is where the title of Levy's book comes from. He told Elite Daily,

When I was going out a lot I realized there was kind of this marker, this line in the sand that differentiated a great night out from being either incredible or deteriorating into a pizza place at 5 in the morning with my guy friends trying to convince me they'll still meet a girl. Being able to traverse that is an art form. My belief is that nothing good happens after 2 am except the most epic experiences of your life. So either make it incredible or just go home. We remember not the duration of pleasure or pain, but the peaks of an experience and how they end. If you let the experience deteriorate, you'll remember it less fondly -- making you less likely to participate in the future.

In other words, know when to push yourself, but also when to call it quits.

This is the balance we need to find if we wish to have truly memorable adventures and experiences.

You can make your life as rich and exciting as you want it to be. But, you also have to be willing to step outside, shake things up and get a little uncomfortable.

Long story short, the secret to having a true adventure is reveling in the awkwardness of our strange, beautiful existence.

If you want to learn more about the science of adventure, click here to hear more about Levy's book.