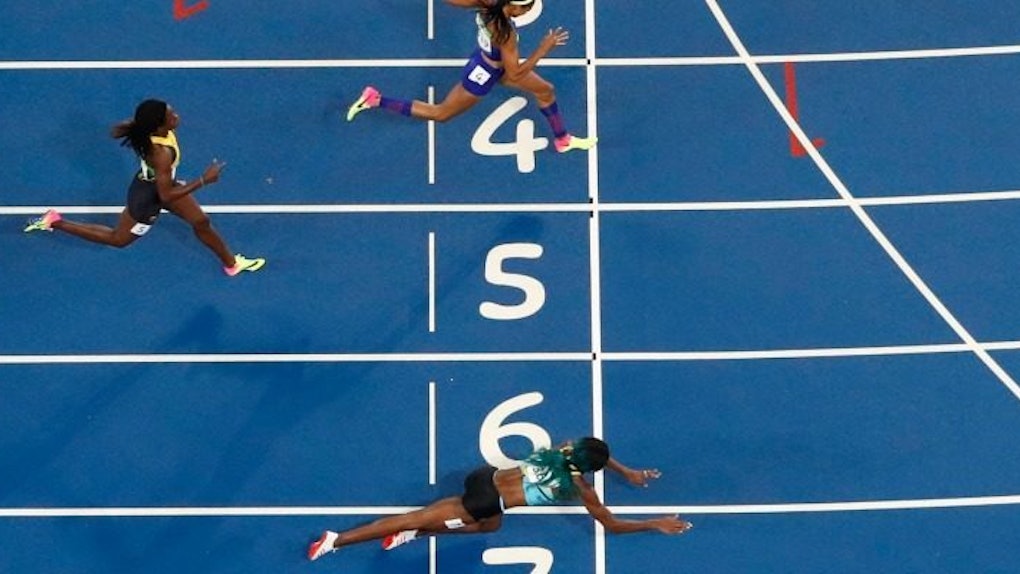 US sprinter Allyson Felix might've already been thinking about that gold medal around her neck, but Bahamian sprinter Shaunae Miller had other ideas.

As you can see in the video above, Felix was on the verge of winning gold in the 400-meter dash Monday night at the 2016 Summer Olympics in Rio de Janeiro, Brazil, when Miller dove over the finish line to ensure a first-place finish.

As you might imagine, Felix was crushed by the shock defeat to Shaunae Miller, and it reportedly took her an hour to even address the media after the race.

At the moment, it's just painful. I feel emotionally and physically drained at this point... Just disappointment, you know. I don't think I've quite had a year this tough. I just really wanted it.

Damn, son. Not only did Miller beat Felix on the track, it seems she trashed her psychologically, too.

I've never done it before. I have some cuts and bruises, a few burns… it hurts. When I was on the ground I didn't know I'd won. I still don't know how it happened. What was in my mind was I had to get a gold medal. The next thing I was on the ground. It's an amazing feeling.

This is quite possibly one of the greatest moments of the 2016 Rio Olympics. Miller wanted to get that gold so badly, she literally put her body on the line.

I'm amazed, and it looks like I'm not the only one who's more than a little impressed by Shaunae Miller's win-at-all-costs mentality.

Honestly, this is what the spirit of the Olympics is truly about.

Citations: 'It's just painful': Allyson Felix tells of her heartbreak after losing 400-meter gold to Bahamian runner who dove across the finish line (Daily Mail)