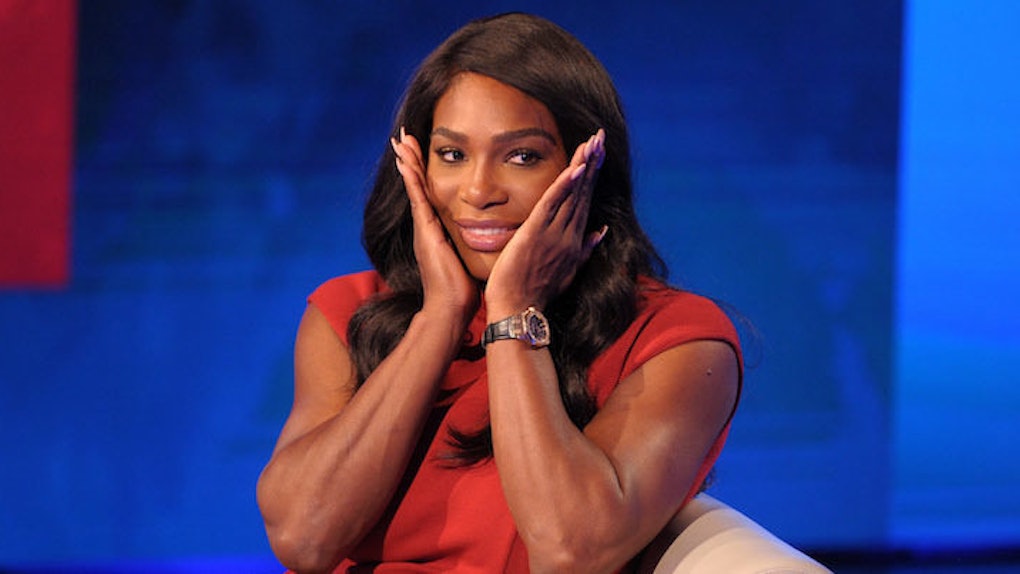 Serena Williams finally shared a photo of her engagement ring with her fiancé, Alexis Ohanian.

But I have a bone to pick with her.

Serena, I truly love you. I rave over your Instagram posts. I watch every single one of your Snapchat stories -- with the sound turned on. That's just how much I care.

A photo of you wearing a fire outfit and casually carrying a gigantic tennis trophy has been my phone background for like two years. Sorry if that's weird.

And yet, despite all my devotion, you've been choosing to share all of your engagement news on REDDIT of all places?

It's not like I want you to send me a text with all your updates or whatever (JK that's exactly what I want), but I just want you to share your love on the social media platforms on which I'm already following you.

So far, Serena has shared both the original news of her engagement and the first photo of her ring on Reddit.

To be fair, that makes a lot of sense.

Williams is a smart woman who understands branding. Ohanian is a co-founder of Reddit. Of course they're going to find a way to promote that platform.

The news of their engagement first hit r/isaidyes last week.

Across her regular Insta and Snapchat postings, there was no word at all of the engagement. If you weren't on Reddit or checking your "Serena Williams" Google alert, you'd have no idea this woman was engaged.

The first reference she made to being engaged on her personal pages was a hilarious picture she posted on Instagram.

Williams is a jokester, so this totally fit with her character.

She knows we're all clamoring to see her ring, so she trolled us with this photo of a taco ring.

If you watch her Snapchat, you know she's obsessed with tacos. Very on-brand.

Then she went off to New Zealand, Ohanian in tow, and again refused to show off the ring.

The press followed her, but she turned the ring to face her palm, so they couldn't get any pictures of it, according to New York magazine.

Because if there's ever been anything Serena is consistent in (besides a decade and a half of athletic dominance), it's defiant control.

She's not going to show a world full of strangers (and haters) her ring just because she knows everyone's dying to see it.

Anyway, the whole traditional "engagement ring pic" is pretty weird because it's basically a picture of "this is how much a man thinks I'm worth," but that's a "screw the patriarchy" rant for another day.

So Serena finally let the world see her ring in a picture she picked and posted herself on Reddit.

Aside from promoting Ohanian's site, she's promoting the brand that gives her a lot of cash.

The picture was posted both on r/isaidyes and r/Sneakers. Because in an extremely on-brand move, the first picture Serena let the world see of her ring featured her wearing a skirt and Nike sneakers.

Hm, so weird -- wonder why she possibly would've wanted to so blindingly promote Nike in that picture... It's almost as if they give her a lot of money or something...

The picture itself just barely shows off the ring.

But, uh, a ring that size really doesn't need all that much to show it off.

Babe, that thing is HUGE.

I mean, that picture is from so far away and still that rock is blinding.

Also, shout out to Serena for having that hair tie around her wrist. I see you.

Williams has always been protective of her personal life.

She chooses to only let the world see what she wants us to see, and this past week of her engagement has been a true example of her control.

After all, there are more important things we should be paying attention to, like how she's going to perform in her profession this year.

Any idiot can get engaged. But there's a reason they call it the "Serena Slam."

Update, 8:30am EST: Serena actually now has posted the photo on Instagram (sounds like she heard me, right???):

But again, she did it in typical Williams style -- by covering the ring with a taco.

Citations: Serena Williams Happily Flashes Her Engagement Ring While Out With Fiancé Alexis Ohanian in an on-Brand Photo (New York)