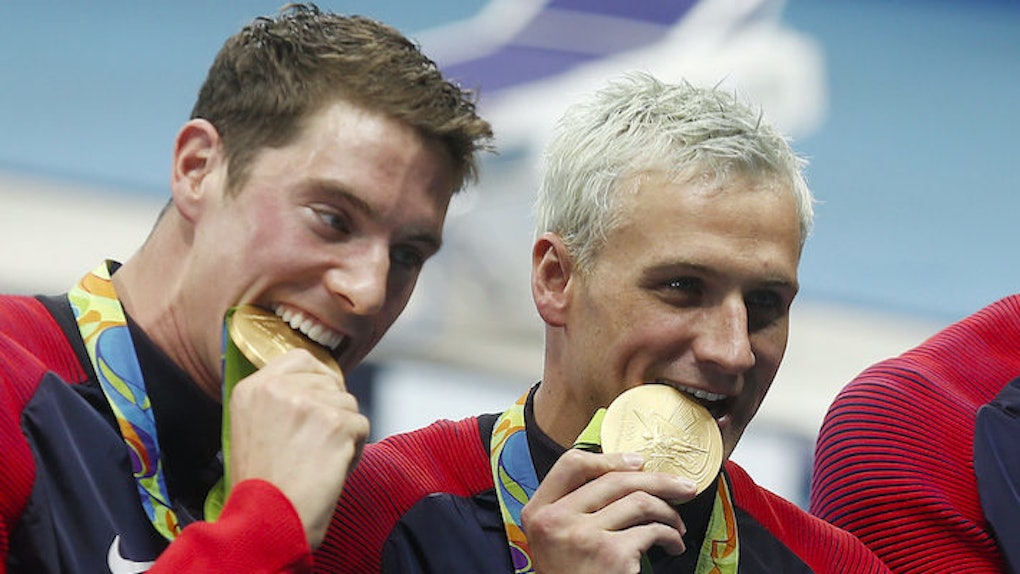 Watergate version 2.0 just got a little more out of hand.

If you haven't been keeping up with the ongoing saga that surrounding Ryan Lochte's storytelling sesh let me give you the tl;dr version.

Ryan claimed that he and his teammates were robbed up at gunpoint. Then began a rollercoaster of changing stories and plot holes on the same scale as those in Tim Burton's "Planet of the Apes."

Since then, security camera footage seems to refute Ryan's claim, and Brazilian police say that the four teammates "vandalized the bathroom on the side of the gas station, damaging mirrors and other property."

That's funny, because Ryan's probably looking at the man in the mirror and asking him to change his ways right about now.

Brazilian authorities also allege that the gun in question was used by a security guard and a legal weapon, and that no robbery occurred.

In fact, we here at Elite Daily have provided a detailed breakdown of the security camera footage. You should check it out.

Fast-forward to now. The Federal Police of Brazil (what an epic idea for a band name) told ABC News that both Ryan and Jimmy Feigen have been indicted on charges of falsely reporting a crime.

Naturally, Twitter had some those things to get off its chest about Lochte's indictment.

Here are some of the most fire tweets written after the news of the indictment was announced.

One person thought the real crime here is Ryan's hair.

How 'bout those jeans though? Lock those up forever, Ryan!

Someone caught a typo a news source had used and had an epic response.

How would Trump feel about #LochteGate? Answer:

There are those who believe we all need to collectively heal from #Lochtegate.

One person thinks that Lochte's original story might have been too familiar to use...

Guys, the true hashtag was right in front of us the whole time.