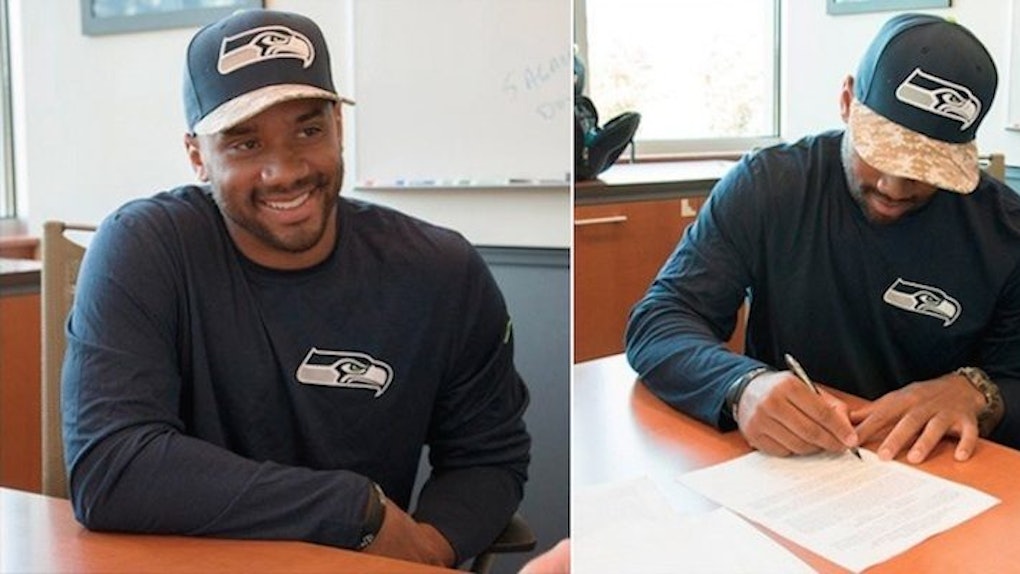 How Russell Wilson Got A Massive Contract Without A Football Agent

Russell Wilson's deal does not have the most longevity -- that distinction goes to Jay Cutler and his seven-year, $126.7 million pact with the Chicago Bears.

Russell Wilson also does not have the largest amount of money attached to his contract -- as of now, he is not even in the top 10.

And yet, there is a strong argument that the four-year, $87.6 million contract the Seattle Seahawks quarterback signed last week might be the smartest deal signed in the NFL.

The genius of Wilson's contract lies in three huge factors.

Second, Wilson will have the chance to earn an improved salary in four years when the market will surely be inflated.

Last, Wilson will get that chance while still getting around over $60 million guaranteed, which amounts to around 70 percent of his contract.

In short, the type of deal Wilson signed (short-term, but still with lots of money guaranteed) is unheard of.

Cam Newton and Ben Roethlisberger earn just as much guaranteed money, but with longer commitments to their teams.

Russell Wilson (@Seahawks) will be one of the highest-paid players in the NFL. Context here: http://t.co/NtL9MB0wIi pic.twitter.com/my75k27ZUC — ESPN Stats & Info (@ESPNStatsInfo) July 31, 2015

What's even more remarkable is the fact that Wilson accomplished this deal without a football agent.

The quarterback then decided that he would have his negotiations handled by the man who, according to MMQB's Andrew Brandt, introduced Cook to Wilson, Mark Rodgers.

Rodgers is not a name familiar in football circles, and that's because he has no NFL clients besides Wilson.

But Wilson's relationship with Rodgers stems from the former's baseball days at NC State.

Wilson's baseball career is mostly a footnote -- he got drafted by the Colorado Rockies, and played 93 minor league games (as the chart below shows) before informing the organization that he wanted to pursue a football career.

While Wilson's baseball career didn't last long, it lasted long enough that he needed a good representative, and that man was Rodgers.

Rodgers' presence in this negotiation was important because as ESPN's Bomani Jones put it in a conversation on his radio show with SI's Doug Farrar, "baseball agents don't understand this non-guaranteed money we talk about in this cooky football world."

As Farrar put it, Wilson wanted to create a paradigm shift, which was behind his move to go back to Rodgers, and Rodgers in turn helped Wilson create that shift.

Wilson was coming from a very low starting point, set to make only $1.54 million for the 2015 season, which is a lower salary than 10 backup quarterbacks in the NFL.

Wow this stat is crazy! Eight backup QBs are scheduled to make a higher base salary than Russell Wilson this season. pic.twitter.com/t398bcaHVN — Nathan Lee (@WildcatN8) July 6, 2015

Wilson had to win big, but he couldn't be desperate enough to give in to the Seahawks' demands to sign a contract that would only be team-friendly.

In that context, Rodgers was the perfect man for the job.

In an article that named Rodgers the 48th most influential person for the 2015 NFL season, off the strength of representing Wilson alone, Brandt wrote,

Perhaps, however, we have a different agent and player mentality here. Rodgers appears not worried about losing the client, and Wilson is a player who has lived without big earnings for the past three years, makes solid money in endorsements and appears unwilling to jump for immediate cash.

That mentality likely contributed to Wilson's confidence in setting a strict deadline for negotiation.

How real was Russell Wilson's deadline? His agent Mark Rodgers has been in Seattle all week. Had a flight scheduled this morning if no deal. — Ian Rapoport (@RapSheet) July 31, 2015

And it certainly contributed to the end result.

Agent Mark Rodgers said goal for Russell Wilson was to get a 4-yr deal instead of more #Seahawks cap-friendly 5 so QB could be FA at age 30 — Gregg Bell (@gbellseattle) July 31, 2015

Now, Wilson has a huge guaranteed number with only four years committed. $31 million of his $86.7 million, furthermore, will be paid up front as a signing bonus.

And $20 million of that bonus is due to be paid on August 10, which means that direct deposit is about to be serious.

That should pay for more than its fair share of dates with Ciara.