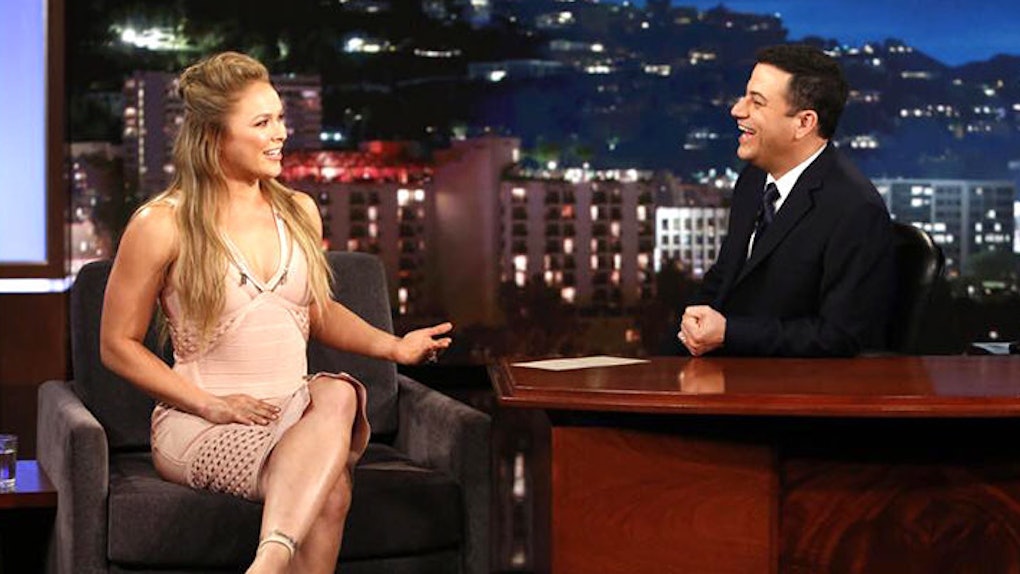 5 Reasons Ronda Rousey Is A Strong Woman Inside And Out

Ronda Rousey is the uncontested, most badass woman in the world. She has superhero strength, effortless beauty and one more win to contribute to her undefeated record of 12-0.

The 28-year-old's superstar recognition is well-deserved: She is the reigning UFC Women's Bantamweight Champion. She's also the first US woman to ever earn an Olympic medal in Judo, and she's undefeated in mixed martial arts.

Her Instagram account boasts countless videos of her skillfully beating up men, who have both inches and weight on her.

But, Ronda Rousey is so much more than her fighting accolades. Her strength goes far beyond jabs and chokeholds.

Here are the five reasons Ronda Rousey is a strong woman inside and out.

1. She calls people out on their bullsh*t.

Rousey isn't afraid to call anyone out. During last month's ESPY awards, she threw shade at Floyd Mayweather after receiving her award for Best Fighter:

“I can't help but really say, I wonder how Floyd feels about being beaten by a woman for once. I'd like to see you pretend you don't know who I am now.”

She also isn't afraid to call out her opponents.

Prior to Saturday's fight, Rousey posted a photo on her Instagram comparing her stats to Bethe Correia's. In the caption, she stated:

“I will make sure you feel every moment of the lesson I'm going to teach you.”

2. She turns heartbreak into motivation.

As a child, Rousey experienced horrific heartbreak when her father took his own life.

Her UFC 190 opponent even capitalized on her pain, making reference to suicide by stating in an interview with Combate:

"Please, don't kill yourself — don't commit suicide, because I will give you the rematch."

"@bethecorreia suicide is no joke or selling point. My father will be with me the day I hand you the comeuppance you deserve."

After beating Correia and maintaining her title, Rousey stated her hopes that no one would discuss her family again.

3. Her body is the ultimate fitspiration.

Weighing in at 135 pounds, the 5'7" athlete is the very essence of physical strength and fitness.

She is not skinny; she is healthy. She has mastered her body. It's her greatest weapon, and she is in control of it.

Too many women fall victim to “thinspiration.” They see images of stick-thin women waddling around in yoga pants during their juice cleanses.

But, Rousey works for her body. She fights for it, and she cares for it. She is what women should look up to.

4. She puts her pride aside for the sake of advocating against domestic violence.

There is no doubt Rousey could take on a man on the ring. However, she firmly stands against it, saying:

"I'll never say that I'll lose, but you could have a girl getting totally beat up on TV by a guy — which is a bad image to put across. "With all the football [domestic violence] stuff that's been happening, not a good idea. It's fun to theorize about and talk about, but it's something that's much better in theory than fact."

And there are training session videos to prove it. She could undoubtedly take on men in and above her weight class.

She stands by her values, and she refuses to contribute anything that could insinuate the approval of domestic violence.

Rousey handles herself with grace and poise, but she knows when to throw a punch. She manages to be one of the toughest women on this planet while also maintaining a sense of femininity.

She doesn't shy away or back down. She is unapologetically herself, and that is what measures her strength inside and out.