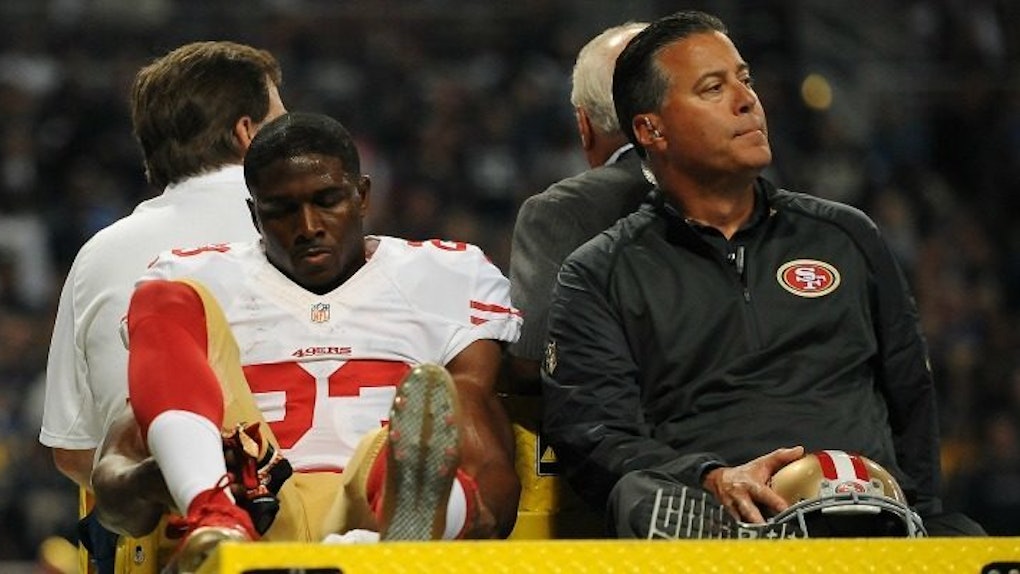 Here's What An Attorney Thinks About Reggie Bush's Case Against St. Louis

Last week, San Fransisco 49ers running back Reggie Bush announced he was planning on suing the city of St. Louis for gross negligence following a season-ending MCL tear he suffered in a game against the Rams in Week 8 of the NFL season.

Bush is looking at suing the city because his injury occurred at the St. Louis-owned Edward Jones Dome, the home of the Rams, and because the injury didn't have as much to do with football as it did a ring of exposed concrete that surrounds the Rams' home field.

The concrete track area, where Bush slipped, comes up very quickly once a player runs out of bounds, which is why the Rams have reportedly expressed a desire to fix the situation.

St. Louis officials have yet to actually solve the problem, however, which is why Bush is considering taking legal action.

Elite Daily spoke to an attorney to see how Bush's hypothetical case stacks up against the city of St. Louis.

Zachary Levy, 26, an attorney based in Northern New Jersey, says,

At first, the thought of an NFL player suing the owner of a stadium because he was injured during a game seems pretty bizarre, almost laughable. Although Reggie Bush’s case against the City of St. Louis for gross negligence is by no means a guaranteed win, his chances at being successful may be higher than one would think, assuming of course that Bush has not waived his right to sue the City in the NFL Collective Bargaining Agreement or some similar agreement.

Bush’s case will likely depend on his ability to establish that the City’s failure to take steps to reduce or eliminate the danger posed by the slippery concrete behind the end zone was a reckless disregard for his safety. In other words, Bush will need to prove that the City’s failure to reduce or eliminate such dangerous conditions was more than mere oversight or a failure to observe a reasonable standard of care.

Mr. Levy addresses this fact in his assessment of Bush's potential case. He tells Elite Daily,

If Bush’s injury occurred in isolation, his case would probably be dead in the water because it would be very difficult to establish that the City knew that this hazard existed. Obviously the City’s failure to act could not have been made with reckless disregard for Bush’s safety if the City could not have reasonably known that the concrete posed a serious risk of injury. However, the reason why Bush’s case may have some merit after all is because another NFL player, Josh McCown, the quarterback of the Cleveland Browns, was injured in the exact same manner as Bush only one week prior to his season ending fall.

It appears Bush's case is largely contingent on the fact this isn't the first time this type of injury has occurred at the Rams' stadium.

And while Bush and McCown were injured recently, there could be additional incidents of injury that surface if Bush follows through with his suit.

It will be easier for Bush to meet his burden of establishing that the City knew, or at least should have known, that the concrete posed such a serious risk of injury due to the recent occurrence of a similar event. Even after the incident with Josh McCown the City failed to take any steps to minimize or eliminate the risk.

An important caveat to Bush's case, should he decide to pursue it, is the precedent it could set for injuries suffered by NFL players across the country.

Mr. Levy was quick to caution and assess this notion, saying,

In terms of precedential value, it is difficult to say what general effect this will have on stadium owner negligence liability because negligence cases are very fact-specific. While a Bush victory would likely have strong impact on stadium owners taking proactive steps to ensure the safest conditions reasonably possible at their facilities, it could also potentially open the flood gates for other lawsuits where players allege that a stadium owner is responsible for their injuries. For example, a player tearing their ACL when they trip over a water sprinkler head that didn’t retract deep enough into the playing field after the stadium owner failed to repair the known malfunction. If Bush is successful, incidences like these may start to become viewed by players as potential lawsuits rather than merely unfortunate occurrences.

It remains to be seen if Reggie Bush will follow through with his threat to sue the city of St. Louis for gross negligence.

In other words, this season-ending injury could end up being a career-ending one, which might entice the running back to go all in.