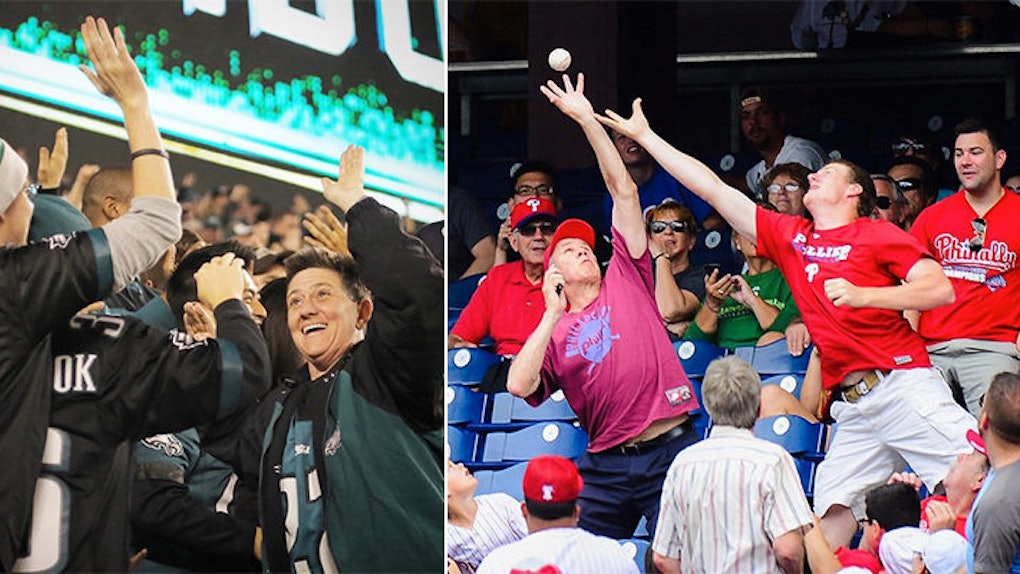 Love or hate us, everyone knows a Philly sports fan when they see one. They have an unmistakable pride for their city, which you can spot (or hear) from miles away.

We may be known as being a bit rowdy, but we just know how to vocalize the city’s pride and support our teams no matter what.

It’s an undeniable trait that Philadelphians are passionate, especially when it comes to sports.

There are plenty of hidden jewels around South Philly, but there will always be certain things that make every Philly fan feel like they’re back in the City of Brotherly Love on game day.

This Philly native is, hands down, one of the most well-known 76ers to ever play. Known as the “Big Dipper,” Chamberlain once scored 100 points in a single game.

Despite his incredible ability to ball, what made Chamberlain such a hero for the city was his love for the game, and more importantly, his love for his city.

Starting off his Phillies career with a grand slam has made Utley a fan favorite.

In addition to being a leader on the team, he also has stolen the hearts of female fans, with his lovable personality and smile.

If the famous statue and steps aren't enough of a hint, Rocky Balboa is, without a doubt, the backbone and spirit of Philadelphia sports.

The famous boxer was born and raised in the city, which allowed him to embody the true Philadelphian underdog work ethic.

One of the most popular Philly athletes ever, Don "Richie" Ashburn is known for being the Hall of Fame center fielder for the Phillies during a majority of the 1950s.

After his baseball career, he became a radio and TV commentator for the Phillies, where he continued to influence the city’s sports scene.

Clarke, the heart and soul of the Flyers team, paired up with Bernie Parent to lead the Broad Street Bullies to the Flyers' only NHL titles in the mid-70s.

Clarke is not only a Flyers legend, but a permanent sports hero in all of Philly history.

Nothing says summer like going to a ball game at Citizens Bank Park. It’s the perfect place to grab a beer and cheer on the Phillies.

Home to the bird gang, this field is flooded with Philly pride. From the 69,000 seats and endless tailgates, you’ll be sure to find some of the proudest and loudest Philadelphia fans the city has to offer.

This is probably one of the busiest places in South Philly. Home to both the Flyers and 76ers, the Wells Fargo Center is constantly packed with sports fans and their love for the city.

Although soccer just recently hit the Philadelphia scene, it’s been demanding attention for the last few years. After the most recent World Cup, more Americans are getting involved in supporting the sport. The Union gives all Philly fans a chance to experience the excitement.

The Union gives all Philly fans a chance to experience the excitement.

One of the most unique mascots of all sports, the Phanatic holds a soft spot in every Philadelphian's heart. Despite not being totally sure what the Phanatic is, he has earned the respect of every Phillies fan.

Chickie's and Pete's famous Crabfries are possibly the most addicting fries you'll ever taste. It's a Philly tradition to get this delicious fries to match your beer for any sporting event.

It’s practically a rule that for every sporting event, there’s a tailgate. It’s what Philly fans do best, and it’s a great way to spend time with people who love the team and beer as much as we do.