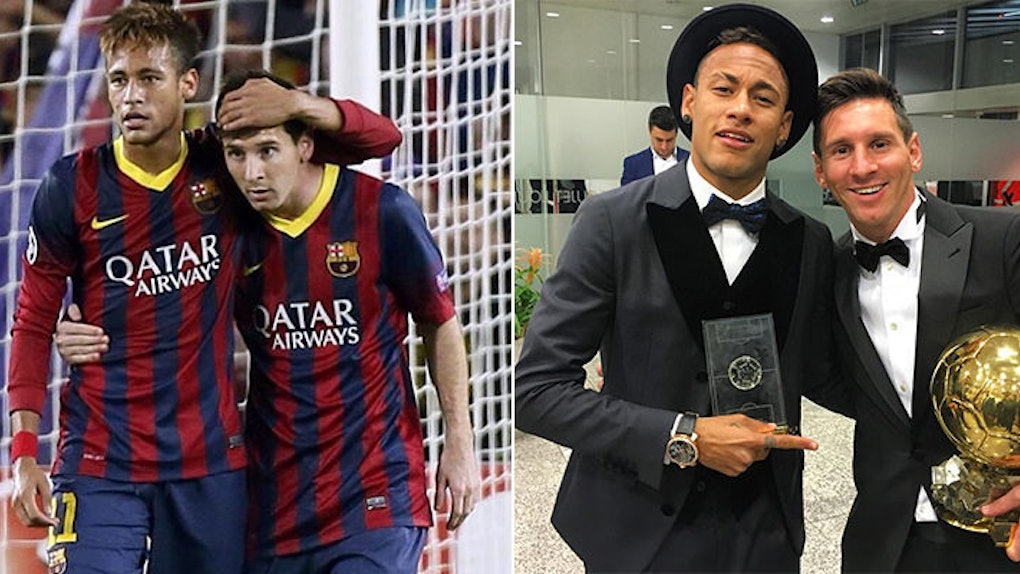 Teammates, especially teammates on one of the best soccer teams in the world, really do make the best friends.

Neymar and Messi may hail from rival South American soccer powers -- Brazil and Argentina, respectively -- but when it comes to FC Barcelona, the pair is more in love than that cute old couple who's been married for 65 years and still hold hands wherever they go.

From Jordan and Pippen to Stockton and Malone, there have been plenty of great tandems in sports history, but none share the love and camaraderie Neymar and Messi do.

Whether they're firing goals into the back of the net, slaying the best teams in Spain and Europe or talking sh*t about a teammate in training, Barcelona's No. 10 and No. 11 are inseparable.

Check out 15 times Neymar and Messi gave us squad goals to live by and a relationship to strive for.

2. But sometimes, these two world-class talents like to chill low-key in track jackets.

3. When they're in training, Messi and Neymar are all about pushing each other to be the best possible versions of themselves.

4. They also know a thing or two about not clashing styles when they go out together to celebrate a hard-earned victory.

5. Some athletes get carried away with selfish celebrations, but Neymar and Messi simply give thanks to one another for making it possible.

6. Which is why more often than not, they end up winning big tournaments like the Champions League.

7. Being friends with everyone is cool, but sometimes you and your BFF just need to hang back and talk sh*t about the rest of the squad.

8. Neymar and Messi know the key to not getting in trouble is simply looking like you're paying attention to everything your boss is saying.

9. We all have that third friend who's not quite as cool but always tries to get in on every picture.

10. The Brazilian-Argentinian duo doesn't respond to the haters with words, but rather by scoring goals and making opponents look silly.

11. Putting in that work during practice will get you results every week...

12. ...but it's important to smile every once in a while and enjoy life as you're living it.

13. Can we just take a moment to acknowledge how strong, yet effortless, the Neymar-Messi selfie game is?

14. Sometimes, we all just need a best friend to put his or her arm around us when sh*t's not going right.

15. And whether you're celebrating life's accomplishments or coping with tragedy, a hug can do more than most people think.

If Neymar and Messi aren't your 2016 squad goals, you need to rethink your role models.