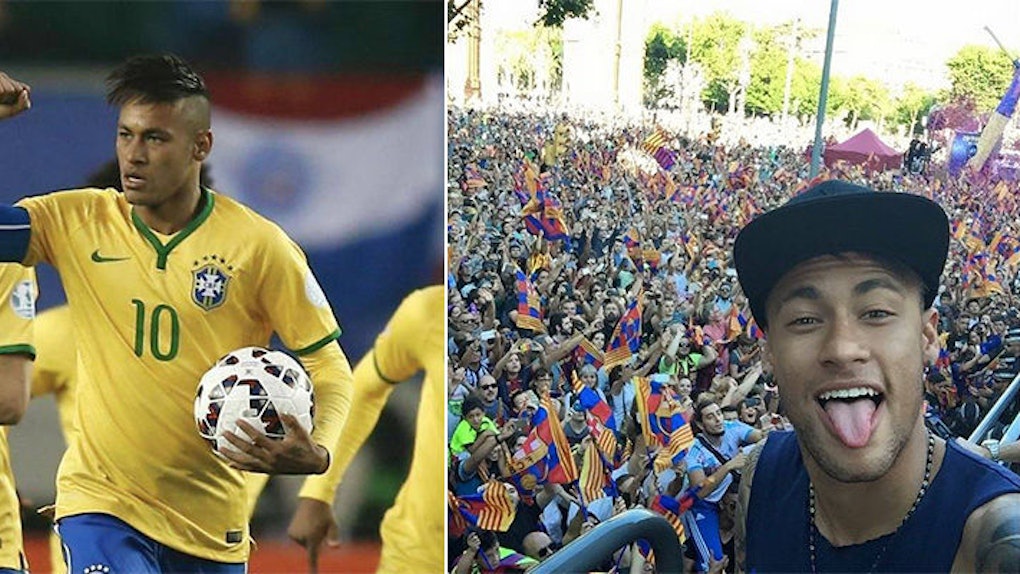 According to the Jordan Brand Facebook page, these are the qualities the most famous basketball player in the history of the sport sought to embody in a sportswear brand.

And by extension, they are embodied by the athletes who are signed to represent that brand.

That list, which is just a small branch of the Jordan family tree, reads like a veritable who's who of superstars from across the sports landscape.

But for a global powerhouse like the Jordan Brand, it's somewhat ironic that there isn't a single athlete on the team who makes a living playing the world's game.

Don't worry, though, Mike, because I know just the dude to rock the Jumpman logo on the pitch.

In his short professional career, the Brazilian has already won back-to-back South American Footballer of the Year honors, scored the 2011 Goal of the Year and was last season's UEFA Champions League top scorer.

And while Lio Messi and Cristiano Ronaldo are currently the two most talented players in the world, here's why Neymar -- the perfect embodiment of soul, performance and style -- should be the first Jordan Brand soccer star.

Neymar may be young, but he knows the importance and pride of wearing the iconic yellow and green Brazil jersey.

And while he goes as hard as anyone on the field, he also knows how to celebrate like a samba king.

Because when you score an abundance of goals like this, you need an arsenal of dance moves at your disposal.

It all started with Neymar scoring the 2011 Goal of the Year while playing for Santos in Brazil.

Since then, he's been scoring goals like this at will.

And embarrassing opponents on the regular with his fancy footwork.

Scoring 31 goals in 59 appearances is impressive, but it means that much more to celebrate with your peers.

The same teammates who never let you get too high or too low in life.

But Neymar is about more than just soccer, which makes him an ideal brand ambassador.

And he's already under contract with Nike, so a move to Jordan would be seamless.

Being on the cover of Vogue is definitely the type of publicity Michael Jordan is down with.

And because real recognize real, Neymar is clearly a fan of No. 23, too.

Soul, huh? Did I mention this goalscorer is also a pianist and Alicia Keys fan?

And is a gold medalist in airplane selfies.

And No. 23 knows a thing or two about gambling, right?

Nothing says team style like having your own private jet.

Or spending $10 million to take your friends to Vegas.

Of course, Neymar went to the Conor McGregor fight... with Vitor Belfort and Lyoto Machida.

After he chilled with James Harden and Trevor Ariza, though.

Most importantly, Neymar's a winner.

Hey, for all we know, Neymar signing with the Jordan Brand could already be in the works.