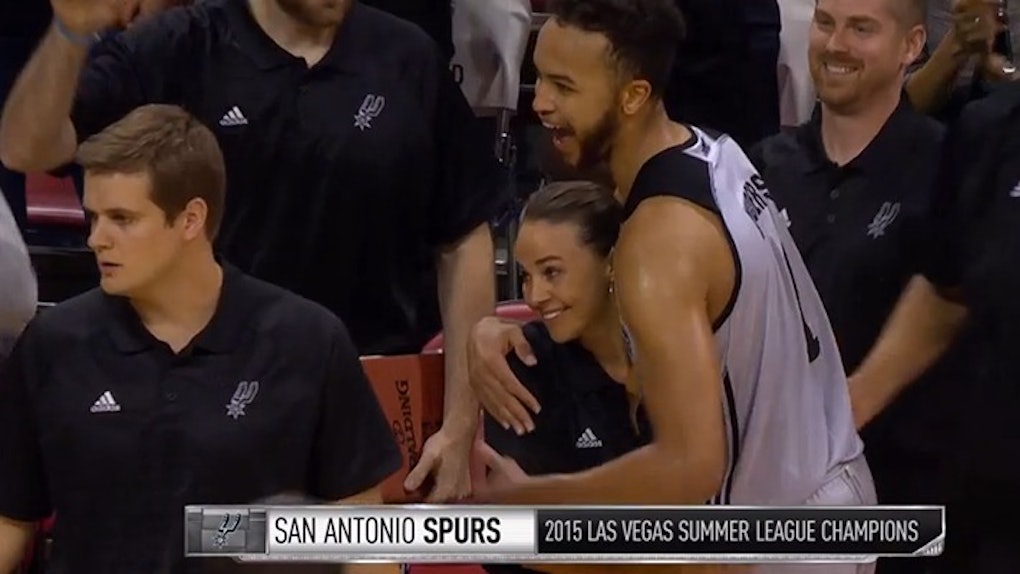 The NBA Summer League serves as a Rumspringa-like period for the league’s young players, a chance for them to see what it's like to be a part of the big, bad NBA world.

During the series of offseason competitions, they will make plenty of bad on-court decisions and learn who they will eventually become as players.

D’Angelo Russell performed poorly, but I still expect him to be a star. Seth Curry was one of the tournament’s standouts, but he will still have to fight for a roster spot.

Despite this, there are some teams that have a reason to smile based on what they saw over the past few weeks.

Whether it's a bright spot following a tough free-agency period or a second-round pick who demonstrated tremendous promise, there are always some advantages to competing in the Summer League.

Here are four teams that should be pleased with what they saw during this year’s series:

The Pistons were criticized for selecting Stanley Johnson with the eighth overall pick when Justise Winslow was still available.

Johnson's problem coming into the draft was his inability to shoot the ball. But, Johnson knocked down three-pointers at a nice clip, and his release was smooth. He was stepping into his shots with the confidence of a seasoned vet.

He does not possess a prototypical release, though. It's very low, but fluid and quick. His release reminds me of RJ Hunter, who was recently drafted by the Boston Celtics out of Georgia State.

As shooting isn't his primary offensive tool, this dedication to improving his game is a good sign.

This should help the Pistons in drive-and-kick situations with Reggie Jackson, and kick-out situations from Andre Drummond in the post.

Lottery pick Myles Turner would have been reason enough to be excited in Indianapolis.

Turner proved to be a promising replacement for Roy Hibbert. Though Turner is a bit shorter, he is much more mobile and has the ability to score all the way out to the three-point line.

However, the real surprise for Pacers fans was second-round pick Joseph Young.

Young led all scorers in the Orlando Summer League (an average of 22.5 points per game), while shooting 51 percent from the field and 45 percent from beyond the three-point line.

He should be able to do an effective job relieving Monte Ellis for what will be a much younger and quicker Pacers team.

The Portland Trail Blazers had rough offseason. LaMarcus Aldridge, Wesley Matthews and Robin Lopez all departed for other teams, and Voodoo Doughnuts wasn't enough to lure any of the other big-name free-agents to Portland.

They were able to trade for Noah Vonleh, however. Vonleh has already been written off by some as a bust after failing to produce much of anything last season as a rookie.

But, he is only 19 years old and already has the makings of a future star. He has a very long wingspan, large hands (measured at 11.75 inches at Chicago pre-draft camp) and a soft-shooting touch reminiscent of Aldridge.

This summer may have been his effective coming-out party, as he emerged with an average of 17.3 points and 8.5 rebounds per game. He also shot 56 percent from the field.

The Blazers may have found a long-term replacement to fill the other half of the dynamic duo with Damian Lillard.

The Spurs proved they are here to stay on the sidelines as well as on the court.

Becky Hammond, during our first glimpse of her as the team’s commander and chief, navigated the team to a Summer League championship.

The Spurs not only broke down barriers, changed the game and proved to be ahead of the curve, but also won. Hammond will only improve in the coming years under Greg Popovich’s tutelage, and the loaded team is ready to make a run at a title this season.

On the court, The Spurs showed they have capable talent that will be able to take over once their veteran core retires.

Kawhi Leonard is the star of the team's future at 24 years of age, and Kyle Anderson was named the Summer League’s Most Valuable Player after averaging 22 points and 5.8 rebounds over six games.

Anderson, a former first-round pick, is a 6’9" point guard whose skill set screams triple-double, and he will see nothing but positive long-term results from having come up in the San Antonio organization.

He could very well turn into a star himself as his and Leonard's roles expand.