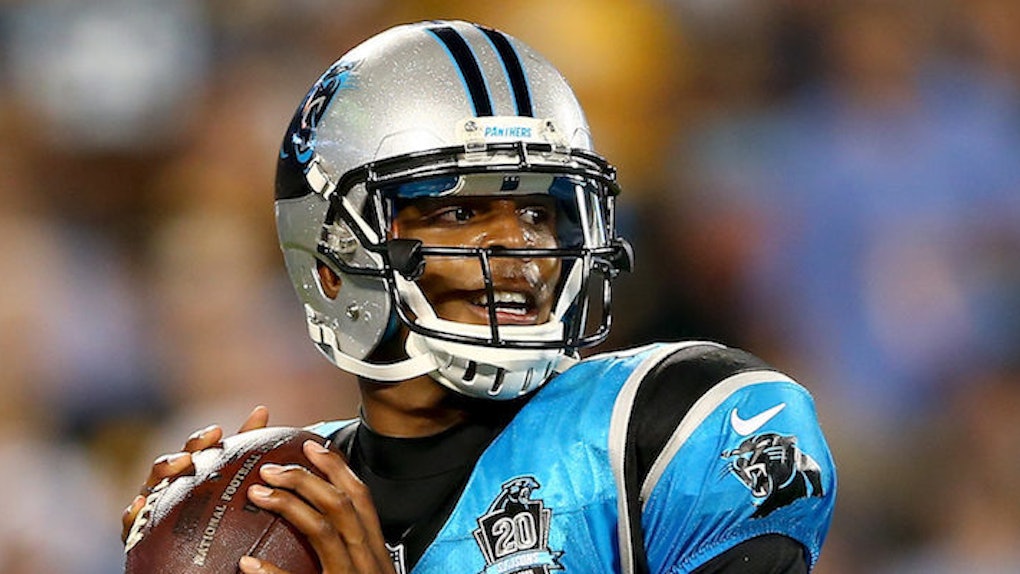 This is America. Everyone should have the right to express his or her view in a peaceful manner.

That being said, I'm not sure why a mom from Tennessee thinks she has the authority to lecture Cam Newton about being a role model.

Rosemary Plorin, a Tennessee Titans fan from Nashville, attended this past Sunday's game between the Titans and Panthers with her 9-year-old daughter.

Rosemary apparently didn't enjoy the Panther quarterback's touchdown dance in the fourth quarter of his team's victory, so she wrote an open letter to Mr. Newton telling him why.

Dear Mr. Newton, Congratulations on your win in Nashville today. Our team played well, but yours played better. Kudos to the Panthers organization.

That game happened to be my nine year old daughter's first live NFL experience. She was surprised to see so many Panthers' fans sitting in our section of the stadium; that doesn't happen much at fourth grade football games. And she was excited we were near the end zone, so we would be close to the 'action,' particularly in the second half. Because of where we sat, we had a close up view of your conduct in the fourth quarter. The chest puffs. The pelvic thrusts. The arrogant struts and the 'in your face' taunting of both the Titans' players and fans. We saw it all.

The shock! The horror! Conduct in the fourth quarter? You mean one of the best players in the league performing in the clutch to keep his team undefeated?

I refuse to believe you don't realize you are a role model. You are paid millions of dollars every week to play hard and be a leader. In the off season you're expected to make appearances, support charities, and inspire young kids to pursue your sport and all sports. With everything the NFL has gone through in recent years, I'm confident they have advised that you are, by virtue of your position and career choice, a role model. And because you are a role model, your behavior brought out like behavior in the stands. Some of the Panthers fans in our section began taunting the hometown fans. Many Titans fans booed you, a few offering instructive, but not necessarily family friendly, suggestions as to how you might change your behavior.

Now, Rosemary is going to tell Cam why he is paid what he is, as well as what type of role model she'd like him to be for her 9-year-old daughter and others.

Let me tell you something, Rosemary. Cam Newton doesn't owe you anything.

His job is to prepare during the week and go out on Sunday -- or Monday or Thursday -- and give everything he's got on the football field, which, considering the Panthers are 9-0 this season, he's done impeccably.

To blame the actions of a few NFL fans on Cam Newton is preposterous. And it's just not fair.

Cam Newton is a 26-year-old, who, unlike several other NFL players, has never been accused of hitting a woman, driving drunk or getting into a physical altercation with teammates.

Cam Newton scores touchdowns and celebrates. You don't like that? Tough sh*t.

How many NFL games have you played in, Rosemary? Have you gone out there with injuries and ailments knowing full well the bodily harm you're causing yourself?

You don't get to judge or reprimand Cam Newton for doing what he's supposed to do.

Citations: A Tennessee mom to Cam Newton: Here's what my 9-year-old saw (The Charlotte Observer)