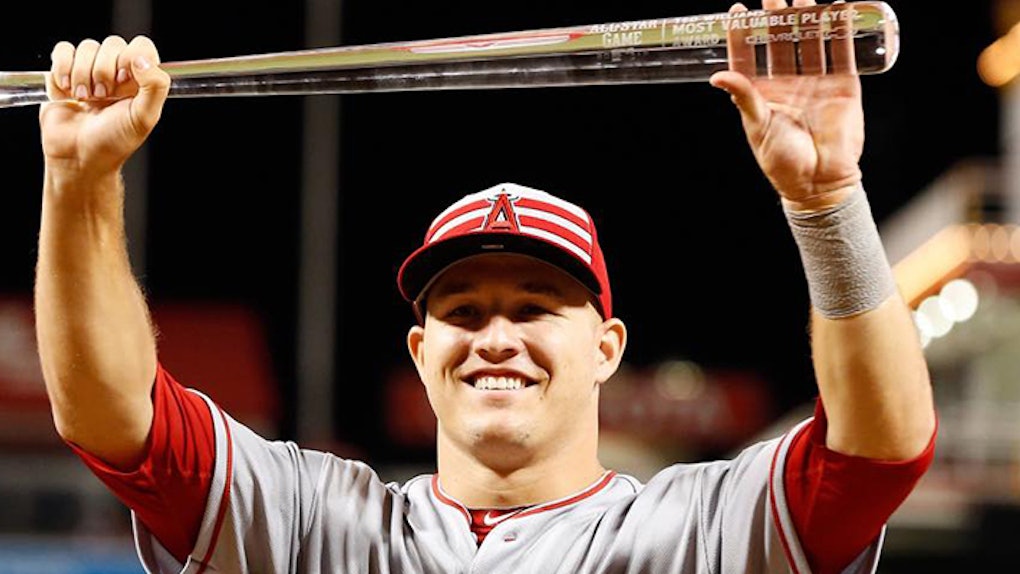 If you know anything about baseball, you've heard the name Mike Trout, who's undeniably the next big superstar.

Trout was drafted by the Los Angeles Angels of Anaheim, with the 25th pick of the 2009 amateur draft.

Talk about coming out of the gate running. In 2012, Trout exceeded his rookie limits. He finished the year with a .325 batting average, 30 home runs and 83 RBIs at the age of 20 years old. Twenty.

Fast-forward to 2015: Trout is now a four-time All-Star, a two-time All-Star Game MVP (back to back) and a three-time Silver Slugger award winner.

The newest baseball statistic, WAR (Wins Above Replacement), is designed to summarize a player's contributions to his team in one statistic.

It isn't 100 percent accurate, but it provides a pretty good understanding of what would happen if a specific player got hurt or was no longer able to play.

Individual WAR values are calculated from the number and success rate of on-field actions by a player with higher values reflecting larger contributions to a team's success.

Clearly, this guy is important.

It's been a long time since baseball has seen this talent. In an article published back in January before the season began, MLB compared Trout to a few outfielders from back in the day.

He was stacked up against Willie Mays, Mickey Mantle, Hank Aaron and Frank Robinson, to name a few.

In all the categories they were compared in, Trout ranked in the top three for all but one of them, where he ranked fourth.

We're talking about some of the greatest fielders and hitters in history! And Trout's numbers were just through his first three seasons.

His batting average will fluctuate throughout the years, but as far as home runs, RBIs, runs scored and total bases goes, those numbers will only continue to climb.

This past weekend against the Texas Rangers, Trout hit his third career grand slam into a fan-made "Trout net."

This net is less than 2 feet in diameter. What are the odds that Trout's grand-freaking-slam would land in this net? They're unbelievable, that's for sure.

On top of being stellar on the field, he's just as incredible off the field. Trout knows his presence is appreciated. He said after his grand slam:

After all of the excitement, Trout stepped out of the dugout and tipped his hat to the fans. Manager Mike Scioscia had some words in regard to Trout's talent:

"Our fans understand what they're looking at. This guy's a special player, a special talent. And when Mike does something special like that, even though it doesn't happen here very often, you just have to tip your cap and acknowledge it."

He finished that game going 4-for-4. The multi-home run game was his fourth of the season and the seventh of his career.

If it's not already, Mike Trout is a name that will come out of fans' mouths with nothing but great things to follow. He will be a household name, one that will surely be in the history books.

Personally, I feel pretty lucky I get to watch him for his entire career and see the amazing things he accomplishes. Mike Trout will be appreciated by kids and grandparents all over for years to come.