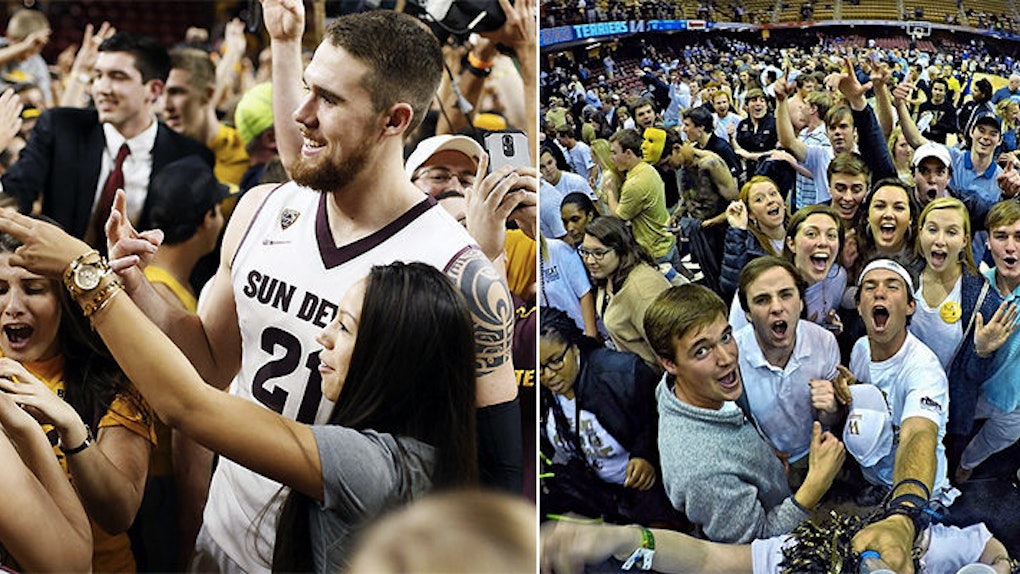 Almost a year ago to date, I cried in a bar.

It should first be said this is not typical behavior for me. I mean, I cry a fair amount, but usually in my home. It’s happened once or twice in public, but that’s just an occupational hazard of living in New York City.

However, that was my first time crying in a bar.

I’m not a huge sports fan. I’m perfectly happy sitting in a bar, eating chicken wings, drinking beer and watching any game that’s on the TV. I’m also equally as happy sitting at home painting my nails and watching HGTV or "Pretty Woman."

To be honest, I think the guys who walk around NYC wearing their Yankees jackets with every World Series win stitched on the sleeve are ridiculous.

Don’t even get me started on the fact that during the 2010 World Cup, my ex had to watch EVERY single match, including the ones that started at 6 am.

There are many things about sports that are incredibly frustrating. We could sit here all day and talk about the injustices of pro-athlete salaries or crimes committed but not punished because of celebrity status.

But, we won’t — at least, I won’t. If you want to talk to the computer while you read this, you go right ahead. Whatever blows your skirt up, darling.

Back to me crying in the bar. The next day, aside from still being absolutely heartbroken over what can only be described as a brutal and incredibly close game played well and fought hard by both sides, I contemplated the root of my tears.

I was born and raised in Tucson, the home of my alma mater, by two parents who, in total, have received five degrees from The University of Arizona.

My maternal grandparents were the first of their families to go to college, and they were also Wildcats.

My dad, being a typical dude, will happily go to any sporting event U of A is playing and can give you stats on every team from rugby to softball. My mom has only ever been a basketball fan; she doesn’t enjoy traumatic-brain-injury sports so much.

My mom, 99 percent of my hometown and a huge portion of our country are college basketball fans.

If you look around at all the people busy filling out their brackets and entering in countless pools this week, chances are they have a very personal tie to March Madness.

For example, I used to tell people Sean Elliott and Steve Kerr were my boyfriends, and yes, they did go to my kindergarten with me. I dreamt about, one day, being famous enough to have my publicist invite Jason Terry to a BBQ at my Malibu beach house.

Embarrassing? Not to me.

The reasons people love their teams may seem vapid on the outside, but they are rooted deep down.

Winning and competition are about as vital to the human experience as you can get. It happens in life all the time: Often, the best man isn’t the winner, but we are told that if we work hard and do right by people, we will find our own brand of success.

Unfortunately, a lot of times, life just isn’t that fair. Hence the need for religion. And theater. And sports. We need to find a reason behind things.

In religion, we are given a doctrine based on pure faith and trust in a higher power. With theater, we see the trials and tribulations of earthly existence played out in front of us, both as a lesson and an “aren’t you happy this son-of-a-bitch up here isn’t you?” experience.

With sports, it’s kind of a combination of the two. It is, in fact, a doctrine followed by those who have chosen or been told to place their faith and allegiance in a certain team.

We also watch, cheer and hope for those in front of us who have been chosen to both exert themselves as people, and to be the ambassadors for us to the rest of the world, country or bracket.

Having faith in a team is having faith in people — people you don’t actually know. That is a pretty cool thing, right? At the very least, it’s sweet. People loving people makes for some good times.

It’s also a way for us to cling to faith when we may not have much in ourselves. We can put our faith into something we love and care about, but ultimately, have no control over.

It’s a gamble, for sure, but the elation you feel when your team "comes through for you" is indescribable. On the flip side, the heartbreak of loss is about as sad and demeaning as crying openly in a bar in the East Village, surrounded by a bunch of kids who graduated in 2013.

So, why do we do it? I can tell you why I do it: For me, it’s home. When I watch a U of A game, it gives me the same feeling I had watching with my grandparents, going to games with my dad, watching my college roommate on pom-line or chugging a beer before heading to the game with friends.

It ties me, even now, to the people who mean the most to me. Calls, group texts, Snapchats, Instagrams and face tattoos all bring me a sense of home. You can ask any fan, and I’m sure they will echo a similar feeling.

Unfortunately, this particular time of the year, not everyone is so graceful with their emotions. Sometimes, they don’t quietly remove themselves and get in a cab, go home and cry about the loss.

While violence is never the answer, it’s not unexpected when so many people are together putting so much hope and faith of the line; reactions aren’t always pretty.

Like with any doctrine, putting your love in a thing that cannot speak or hug you is a little dangerous. Look at the crusades! A bunch of people were impassioned by their love of a "thing" and all kinds of sh*t got out of hand.

Did I just compare college basketball to the Crusades? Damn straight, baby. We all have something, whether it's a sport, religion, politics or a stamp collection, that we love so passionately, no one can take it away.

Life is scary and weird, but having faith is what grounds us. It might make us do crazy things from time to time, but ultimately, it's part of the human experience to have faith in something other than ourselves. It’s what brought us together as communities and kept the bears from eating us. It’s what ties us to each other.

It's like when my roommate used to watch games while on the phone with her dad, or how my friend’s family’s tailgate would go on no matter rain or shine. It's a community that transcends location, age and time. That’s why, come March, the madness sets in like wildfire.

So, the next time you see some crazy sports fan painting his children, wearing hats that look like food, screaming at the TV or crying, go ahead and judge them. Silently. In your head. They may punch you.

But, hand them a beer or a hug because those loud, weird, obnoxious people are the ones whose faith could use a cuddle.

They aren’t just rooting for everything that team stands for and for their ultimate glory over everyone else, they’re screaming for every good and bad memory that has been grounded by their faith in that allegiance.

So yeah, they may be weird, but they also should be that passionate.

Heaven forbid we go through life and don’t feel that kind of passion somewhere, or have the courage to have faith guide us on to next year.

With that in mind, it’s game time.