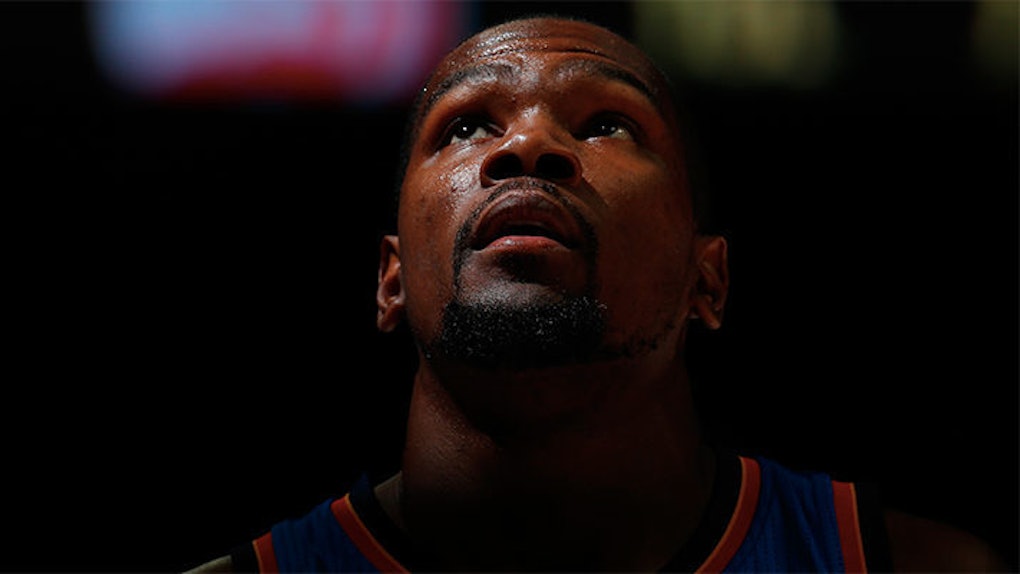 I feel bad saying that Kevin Durant is boring.

And if I ever met him face-to-face, I obviously wouldn't dare utter it. But I have the luxury of being an Internet gangster, and will now make the case that KD (some nickname, huh?) is the most boring NBA superstar of the modern era.

This notion that Durant is boring is hard to quantify. It's something that I began to ponder when I started watching Thunder games last season around the time that Durant got hurt.

Because his teammate Russell Westbrook was playing out of his mind. It really was a thing to watch. Sure, the Thunder were worse without Durant, but they immediately became more compelling.

Kinda weird, right? A team loses its best player who also happens to be one of the top three players in the league, and immediately becomes compelling?

And that's when I started asking: Is Durant really, actually, secretly kind of boring?

He has averaged over 27 points per game for his career, and shoots a lot of threes, both with high percentages. One would think that those numbers would pretty much guarantee that said player cannot be boring. He is an offensive powerhouse all by himself.

In an effort to quantify this nebulous notion, I was able to pin down a handful of reasons as to why KD is indeed a boring NBA superstar.

He has an unattractive shooting form, which is rare for a star scorer. His form is not necessarily ugly in a captivating can't-look-away Shawn Marion style, but it just isn't enjoyable to watch.

His style of play is also kind of awkward. He's a tall, gangly fellow, and doesn't have the effortless smoothness of a Tracy McGrady, or an outwardly electrifying intensity like teammate Russell Westbook. His herky jerky-ness is not charming like Manu Ginobli or James Harden.

One particular play that Durant is notorious for, and something that the Jordans and Birds of the world would never stand for, is the infamous rip-through.

The rip-through is part of a broader NBA problem of drawing fouls when the shooter clearly has no intention of shooting, but Durant does this with reckless abandon.

He's not alone in abusing this type of move, but I don't love watching a player who lives at the free throw line. Durant spent the early and middle part of his career living at the charity stripe, which doesn't make for entertaining basketball.

Okay, okay. Enough of the boring on-court stuff. Let's talk off the court. Is it possible that Durant's off court personality has contributed toward an apathetic fan-base?

One notable off-court quality is Durant's bizarre relationship with the media. Durant has attacked the media many times, with my personal favorites being: “You're a dumbass,” and then the all-time classic, “you guys don't know sh*t…ya'll not my friends.”

The problem with the media-attacking strategy is that it doesn't work in sports. Newt Gingrich famously used it to remarkable aplomb at a GOP debate back in 2008 (six rounds of applause, two standing ovations, and a chagrined moderator all in the first five minutes are impressive stats), and Donald Trump has also utilized it to an almost scary-successful degree.

But when a player attacks the media in sports, the payoff is significantly worse, as he or she risks a few things:

The third risk is the worst. There definitely exists the notion that there are fewer glowing editorials and features about Kevin Durant than he deserves, because of his shoddy treatment toward members of the media. (It also doesn't help that the Thunder brass has extremely strict rules with reporters).

And to make matters worse, Durant recently apologized for attacking the media. If you're going to attack 'em, don't back down three days later.

Other off court shenanigans, or lack thereof, might also be hurting Durant's image. His outfits are boring. He made a really corny kids movie. And his nicknames are weak: The Servant? Not imposing enough. Durantula? As long as I'm not barefoot, I'd gladly stomp on a tarantula.

As an NBA purist, it feels a bit unfair to refer to a superstar as boring. Especially a superstar who is a role model for kids and is a very unselfish, efficient player.

But maybe that's part of the problem. Is Durant too nice? He's certainly been fighting that label for a while. But until he gets into a shouting match with teammate Russell Westbook (sorry, but Enes Kanter doesn't count) on national TV, he simply won't be compelling.

Maybe had he broken the Nike/Jordan Brand/Adidas NBA sneaker cartel and signed with Under Armour, it would have given him a sleek non-conformist label, and something for the media to praise him about.

Or maybe he could have refused to leave Seattle after his rookie season, and taken a vow to not play the 2008-09 season if the Oklahoma City relocation took place. Imagine if he had done that? He would have achieved immediate immortality.

Or maybe, he just needs to win a ring.

Regardless, it's hard to pin down exactly why, but there are at least 15 other NBA stars that I'd rather watch and read about than Kevin Durant.

Why? I'm not sure. But there is definitely something about "KD" that doesn't leave much to the imagination.