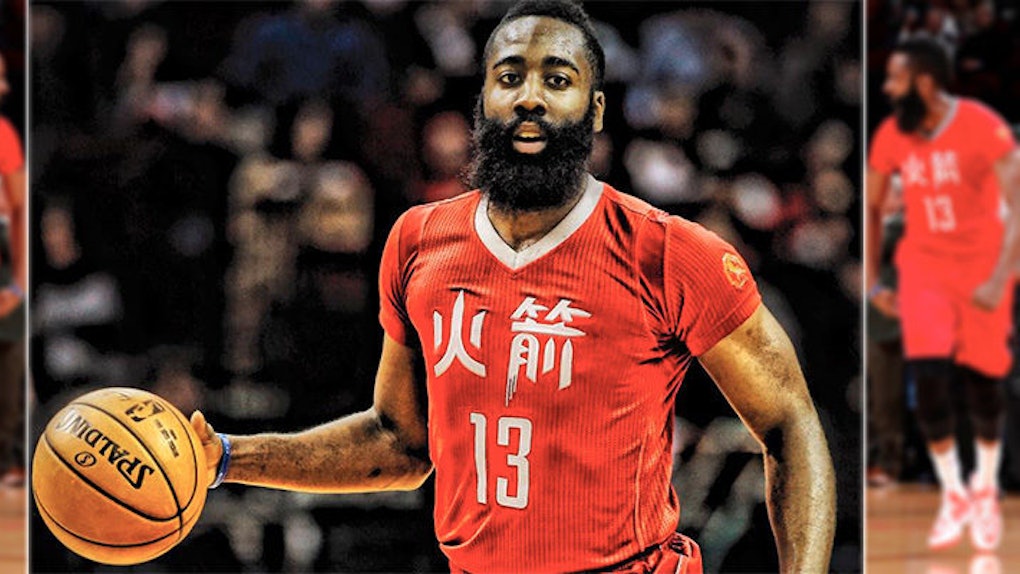 If you haven't heard, James Harden went off the other night.

The 25-year-old guard recorded his second triple-double of the season with 31 points, 11 rebounds and 10 assists during the Houston Rockets' win over the Minnesota Timberwolves.

It was an MVP performance, especially highlighted by an MVP move, for a man who's been in MVP form all season.

With Kevin Durant missing 29 games (and counting) this season, and LeBron only playing up to his high standards after his two-week sabbatical in January, the winners of five of the last six NBA Most Valuable Player Awards have pretty much been ruled out of the race for the MVP trophy.

It was always likely a new face would lead the charge to the award, and there's no better candidate this year than James Harden.

The former Arizona State Sun Devil has credentials -- like averaging 27.3 points per game -- that go beyond being the league's current best scorer. It's the way Harden plays that makes him a perfect fit for the Maurice Podoloff Trophy.

Under that type of criteria, James Harden is the perfect MVP candidate. Here's a breakdown showing why:

The first thing to note is how the Rockets play.

Houston's strategy is heavily driven by analytics, and like most stat-lovers, they don't like mid-range jumpers. This graphic from Grantland's Kirk Goldsberry illustrates that perfectly.

Houston likes to get its baskets either close to the rim or beyond the three-point line and the players seem to only take medium to long-range twos as last resorts.

This tactic fits Harden like a glove, particularly for the two following reasons.

1. Getting to the basket:

Harden is a beast at getting to the basket, better than anyone in the league, in fact. There are two particular stats spelling that out pretty plainly.

The Rockets star leads the league in total points on drives to the basket, with 428 scored all season, per NBA.com stats at the time of writing. That's 50 points more than the next highest driver.

And when Harden attacks the rim, he gets to the free-throw line more than anyone else.

The three-time All-Star made 86.6 percent of his 531 free-throw attempts this season. That's over 150 more attempts than the next leader.

His team reaps the rewards of his drives, too. Harden leads the league in the amount of points his team scores per game as a result of his drives, with an average of 14.2.

Harden is the fifth most productive shooter from beyond the three-point line, with 150 makes this season, 17 behind league leader Kyle Korver.

But, Harden also uses his ability to drive and kick to create three-point shots for his teammates more than other players in the league.

Per Goldsberry's last tally, which aired on January 19, Harden led the league in assisted three-point shots and the combined number of those assisted shots and made threes, both by a wide margin.

Translation: He is the single best player in the NBA at taking and creating three-point shots. He's a perfect fit for a team like the Rockets who only like to shoot from deep if the shot is from beyond the arc.

Of course, no MVP candidate can be credible if they play noticeably bad on the defensive end.

His performance was bad enough for a whole video reel of his defensive "low lights" to be created.

And it was so bad, it was the punchline of one of his Foot Locker commercials.

This year, though, Harden made a widely acclaimed effort to play better defense.

His defensive rating this season (101) improved over last year's (107), which is just a fancy way of saying he is allowing fewer points to be scored on him than he did last season and, in fact, any season of his career.

Those who watch Harden closely are likely to tell you he was never that bad on defense, and he's not that good now.

But, the point is he's no longer a joke, which helps when you're trying to be taken seriously as an MVP candidate.

And that's exactly what he deserves. Harden is not only leading the league in scoring, but he's playing in a way that directly impacts the success of a team currently holding the title as the NBA's fourth-best.

If that doesn't spell Most Valuable Player, the award might just need a new name.