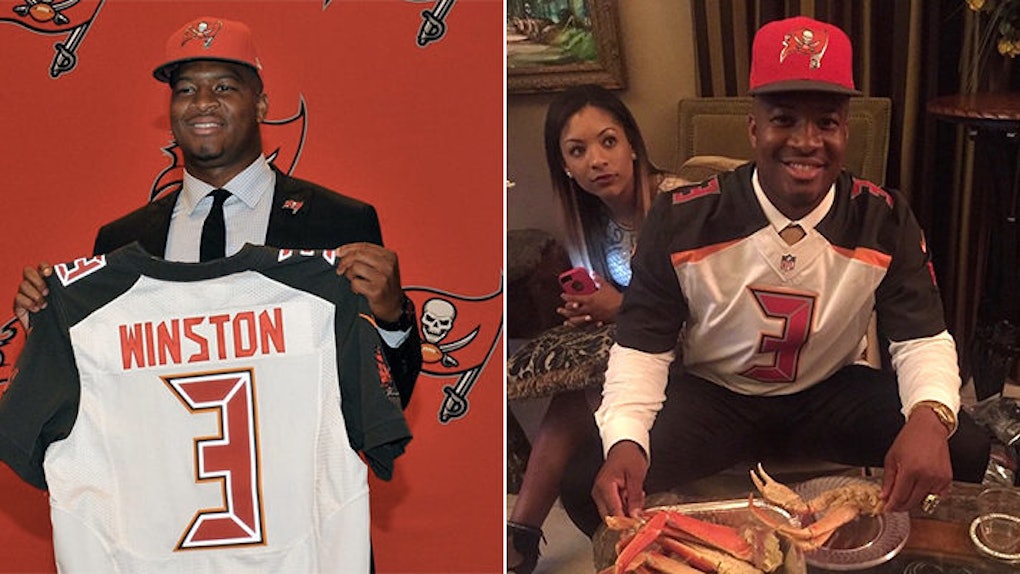 Is Jameis Winston’s Promising NFL Future Enough To Forget His Past?

The 2015 NFL Draft has officially come and gone, and we now have the first glimpse into the future of the league.

It was some of the most exciting yet nail-biting three days for all football fans, as they watched their favorite college players have their dreams come true and see what teams would look like in the fall.

These recent college studs are about to take the leap from collegiate to the big leagues, where it not only matters how you play on the field, but also how you behaves off the field.

One player who has been already making plenty of headlines is the number one overall pick, Jameis Winston.

Although it appears the Buccaneers have put past issues aside, not everyone has completely forgotten this star athlete’s trail of trouble he left behind at Florida State.

As early as 2012, Winston got himself an estimated $4,000 in apartment damages, accusations of rape, theft (for crab legs) and a rumor of being paid for an autograph.

Since Winston was always cleared of charges, it threw Florida State under the microscope of how big football schools handled player scandals.

It also brought up the question of whether a player like Winston could handle the professionals.

Despite always coming out clean, Winston still carries every incident from FSU with him and both he and the university have made public announcements that if Winston wanted a career in the NFL, he would need to do some work to gain the trust of his new teammates and fans. At the draft, Winston said:

Winston’s off-field problems proved to be a possible concern for the NFL, which, especially after last season, is trying to clean up its image.

There’s no doubt Winston is talented, but the quarterback’s past drama is already bringing concern about him.

He stands at 6’4" tall and weighs in at 230 pounds. In addition to a powerful build, he also led his college team with 65 touchdowns, 7,964 yards and 44 sacks as the starting quarterback.

Although Tampa Bay fans are excited for a new quarterback, they have to be worried about Winston making it through his first season without another public incident.

On the other hand, people can also argue that Winston was a typical, young and foolish college student during those times.

Some feel he simply made some past mistakes and is trying to better himself for the pros.

Shortly after being selected, Winston tweeted he was, "so proud to be a Tampa Bay Buccaneer," adding that it was a "dream come true," in celebration of his pick.

It's pretty clear Winston is happy with his move, and as far as the public can recently judge, he also seems committed to cut out any off-field nonsense.

Going to the pros is something Jameis Winston has been working toward for his entire life, so hopefully he can leave any wild or incriminating behaviors behind him.

With a fresh start and ability to learn from the past, he could reach his full NFL potential this upcoming season.

Although everyone has his or her own opinion about Winston's clearly troubled past, I think this time talent outweighs concern.