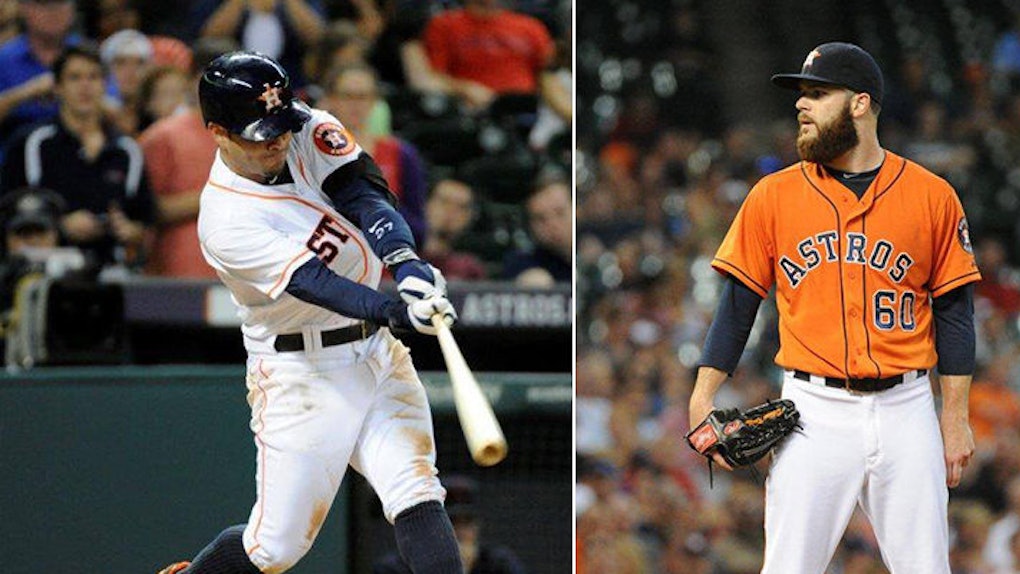 This Team Finally Proves Baseball Can Be Exciting Without Steroids

Don’t look now, but the Houston Astros have gone from worst to first.

And not only have the 'Stros completed their turnaround with remarkable speed, they’ve rewritten the formula for success in the process.

Two years ago, the Houston Astros finished 51-111 and became just the 16th team in Major League history to lose more than 110 games in a regular season.

Now, under first-year manager A.J. Hinch, the first-place Astros are 30-18 and hold the greatest division lead in all of baseball.

And while much of the short-term success of the club is due to betting big on the bullpen and relying on young sluggers, an overall shift in baseball ideology is at the heart of Houston’s resurgence.

Out with the days of signing a 35-year-old Carlos Peña to a one-year deal, and in with having three out of your top four highest-paid players be pitchers.

Here’s how the 2015 Houston Astros are laying down the blueprint for how to be great in a post-steroid era.

Berkman, Bagwell and Biggio are gone, but the Astros are far from lacking in the power department.

For years, the Houston Astros were buoyed by the big bats of Lance Berkman, Jeff Bagwell and Craig Biggio.

And although the Astros made four NLDSs in five years starting in 1997, they failed to advance to a single NLCS and won just two playoff games during that run.

It’s not solely the fault of the "Killer Bs" that those Houston teams failed to accomplish more in the postseason, but when a core group of players are being paid the highest salaries on the team, the onus inevitably falls on them to carry the club.

This is one of the fundamental differences between Astros teams of the past and the one general manager Jeff Luhnow is trotting out in 2015.

Instead of relying on a few big bats, the entire lineup is producing to keep the Astros rolling.

And despite not having a perennial All-Star, or anyone over 30 in the starting lineup, the Astros are still mashing.

Through 48 games, the Astros lead the league with 66 home runs. They’re also in the top 10 in runs scored, runs batted in and slugging percentage.

Betting big on the bullpen is paying off in boatloads.

But in order to finish games in October, a team needs to be scoring runs all year long.

And conventional wisdom holds that a team builds long-term success by first establishing a young core, then going after a few big-name free agents and only tinkering with relief pitching as the final piece of the puzzle.

The Houston Astros see your conventional wisdom and raise you the second-lowest ERA among Major League bullpens (2.13).

Before the start of the 2015 season, Luhnow and the 'Stros invested heavily – at least in Astro terms – in relief pitching, in an act that may have been viewed by some as putting the cart before the horse.

But it’s Houston who is leading the pack with a little more than a third of the season already in the books.

Despite not having a position player who will make more than $8 million this season, the Astros have two relievers who are making over $5 million in 2015. In fact, there are only two relief pitchers making less than $1 million on the active roster.

In addition to boasting the second-lowest bullpen ERA in the bigs, Houston’s relievers lead the league in wins (12), saves (19) and batting average against (.184).

They also rank second in strikeouts (161), while surrendering the fewest walks in baseball (32).

It also doesn’t hurt to have defense like this backing you up late in games.

A pair of 25-year-olds are leading by example.

The diminutive -- he stands just 5’6” -- Jose Altuve is a 25-year-old second baseman from Maracay, Venezuela.

He leads the Astros in stolen bases (15), hits (58) and plate appearances (212). He is also second on the team in runs scored (23) and near the top in almost every statistical offensive category.

In short, he is one of the most important players in the Houston Astros' lineup. And his teammates know it.

Teammates like George Springer, another 25-year-old who’s certainly no offensive slouch -- he leads the team in walks (29) and is second behind Altuve in stolen bases (11) — but is making his name more with the glove.

And Astros fans will be ecstatic with how much Altuve and Springer seem to like one another.

Above all else, the Houston Astros are simply enjoying every day on the diamond.

By that logic, we’re about a decade into the latest era of baseball. And whether you call it the age of deadball, moneyball or sabermetrics, it’s most definitely uncharted waters for our nation’s oldest professional sport.

The Houston Astros haven’t had a winning season since 2008, haven’t made the playoffs since 2005 and haven’t won a World Series in, well, forever.

In the mid-90s and early-2000s, when they were last consistently competitive, the 'Stros were built on big bats like Berkman, Bagwell, Biggio and Bell; and big arms like Clemens, Oswalt, Hampton and Pettitte.

Now, I’m not accusing any of these players of being steroid users, but it’s clear that during this time, the game was predicated on big names producing big numbers for big bucks – the Houston Astros most definitely included.

You can draw your own conclusions based on the fact that Houston hasn’t made a postseason since the “post-steroid era” began.

And devoid of big names and proved veterans in the clubhouse, the 2015 Houston Astros are proving to be a revelation in the modern game.

Having one of the best bullpens in baseball and hitting more home runs than anyone are key ingredients in the recipe for success, but these 'Stros also enjoy playing for one another. And though that’s unquantifiable, it’s definitely a common trait among champions.

The 2015 Houston Astros prove you don’t need to go all in to win a championship, you just need a group of guys who are willing to go all out for each other.